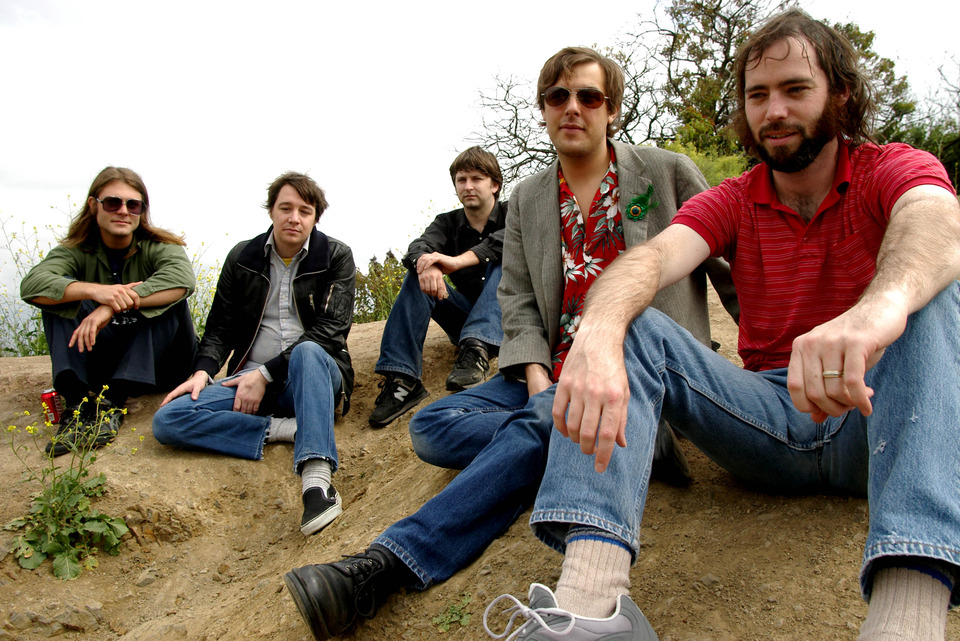 When You Wish Upon A Star: An Interview with Ethan Miller of Comets on Fire

While researching previous Comets on Fire interviews in preparation for my own, I came across a word several times that I think adequately describes the direction or aesthetic of this band: organic.

When I first read that word, and several times thereafter, I was curious how, or why, organic. Was it provincial? Was their sound sun-drenched like homegrown tomatoes? Time and time again, the word popped up. But then it hit me. Organic in the sense of constant change; growing, not only provincial, but also with a sense of itself; a sort of dynamism that isn’t stuck on itself, that can adapt. Not only is Comets on Fire ORGANIC, but Ethan Miller himself is a pretty swell guy.

I started off the interview really nervous-like (I have to admit right off the bat, I am a HUGE fanboy), but when I got on the phone with Mr. Miller himself, things just fell into place as we started talking and going on. It didn’t even feel like an interview at all …

SLUG: So are you looking forward to coming to Salt Lake? Have you been to Salt Lake before?

Comets on Fire: Yeah. Yeah. We played with the local Salt Lake band Le Force and Tim Green [from the Fucking Champs] put us in touch with Judd from Le Force and we played at the Zephyr. Judd was a total fucking rad dude. They did a two-piece thing that night. They played a cover of “Black Dog” by Led Zepplin. It was pretty fun. It was kind of shocking to get drunk at first, because we had been warned about the low alcohol percentages. We got these teeny tiny shots and we were like “What the fuck …” Yeah, Salt Lake was a cool, bizarre place.

SLUG: How do you guys like being on Sub Pop? Was it a surprise to be on that label, considering what you guys do and bands like The Shins, Low, etc., are on the same label …

Comets on Fire: It was little bit of a surprise that they were so interested. As far as the band fits, right then, Sub Pop just had its kind of burst of success with The Shins and The Postal Service, so they had an opportunity to open their doors to the underbelly of the label and bring in Comets, Wolf Eyes, A-Frames, etc. kind of groups and they were doing the Radio Birdman and Yonkers reissues. We liked the idea of being on a label that wasn’t a perfect fit for us; that was a little bit of a surprise.

SLUG: What do you think about all this limited edition, tour-only merchandise? Recently on Ebay, I saw this Wolf Eye’s record that had been lathe-cut onto a laserdisc … Do you guys do any of that kind of stuff?

Comets on Fire: Yeah, we try to do as much of that as we can. We might as well … it’s fun, too. There is not a huge artistic weight lying on your shoulders to do a limited edition lathe-cut record for tours, as there is to do a record that may reach thousands of people. And they’re like, “make the next record and make it good!” With the limited edition thing, it is kind of like a handshake between the fans and yourself. It’s like, “We’re having fun and you want some collector’s shit to buy …” The whole world isn’t going to end if it isn’t a fucking masterpiece, you know, that is what they’re there for. They’re just supposed to be these fun items that show a little different sector/vein of the band.

Comets on Fire: The Michael Jackson thing never worked out … I don’t know what the fuck happened there. I wrote to Sony and shit and their people were supposed to call my people and stuff … and they just didn’t get back to me on that stuff. But in all seriousness, there are other people that I am sure we would love to collaborate with. That Burning Star Core thing [limited edition tour-only item] was so much fun and it frees us up to do this kind of stuff. So, yeah, there are a million groups we would love to do that with. But it is kind of hard to do it [because of the logistics of it].

SLUG: I have heard your music referred to [in other interviews] as “visual.” Do you see Comets doing film work in the future?

Comets on Fire: Yeah, we’re supposed to do some soundtrack work for a friend of Ben’s [Chasny] that is putting a movie together and that is pretty thrilling for us if it actually all works out. I know Utrillo Kushner [drummer for Comets] and myself are super into that stuff and the way they work with film. Some of the stuff on Blue Cathedral was approached soundtrack-wise. What I mean is that the maximum rock or pop impact wasn’t the first thing on the agenda, but rather, creating an atmosphere or creating things that might endorse the impact of what is coming next or what came before. The music isn’t for the moment, but for the anticipation of what is coming or foreshadowing or what has already happened, not to just represent the now.