00:00 / 20:24
Spotify Stitcher
RSS Feed
Share
Link
Embed
Molly Hamilton and Rob Thomas are cinematographers of music, intentionally webbing together songs that evoke reminiscing. Inspired by the gloomy dark of the Northwest and the nostalgic imagery of the old American west, Widowspeak could be described as “cowboy grunge,” not so much literally, but in the sentiment. 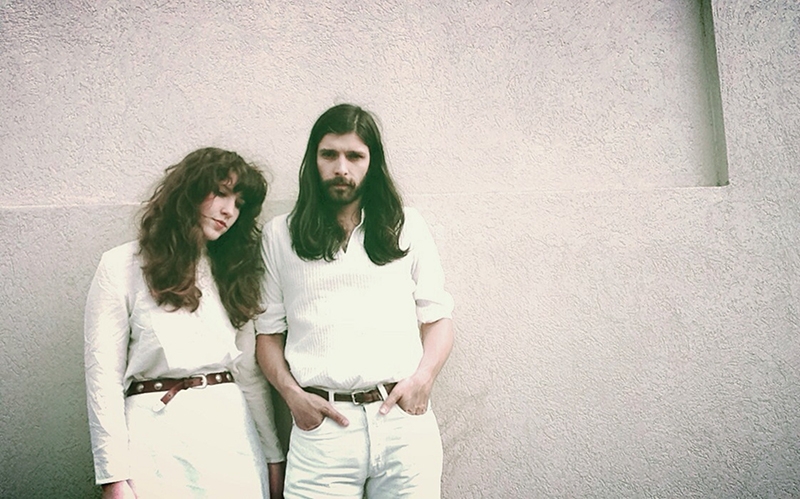 You’re walking down a foggy road covered in leaves, wearing your favorite worn-in sweater, when you come across this beautifully decrepit house. Something about it is irresistible, and you’re not really sure why, but you open the door and the first thing you see is a dusty record player. You blow the dust off, flip it on, lay on the ancient hardwood and the music trickles down you––this ghostly, delicate spell. You’re helpless against the memories that begin unwinding. Things you’d kept carefully quilted in the back of your mind are suddenly tangible. When the player softly clicks and it’s time to flip to the other side, you feel as though you’ve just snapped out of the most lucid and lovely dream, and you can’t quite place how you ended up in this house, but you know you will never forget it.

That’s how listening to Widowspeak for the first time feels. Molly Hamilton and Rob Thomas are cinematographers of music, intentionally webbing together songs that evoke reminiscing. “I write a lot about things that have happened in the past, not necessarily going back decades and decades, but finding that longing sort of feeling,” says Hamilton. Inspired by the gloomy dark of the Northwest and the nostalgic imagery of the old American west, Widowspeak could be described as “cowboy grunge,” not so much literally, but in the sentiment. “There’s not a depressed or an anti-anything feel in our music. It’s more the ethos of grunge than say, heavy guitars or something,” Thomas says, with Molly adding that their music has a “dark, sort of murky, raw edge.”

Hamilton originally wanted to start a “Disney soundtrack folk” band and had been writing the name Widow’s Peak in notebooks for quite some time before she found herself in a position to use it. Nowadays, their music is drawing less from folk and more from an eerie, misty place––but the film appeal still exists. When I asked if the band would still be interested in a musical soundtrack if the opportunity presented itself, Thomas said without hesitation, “Hell yeah.”

Widowspeak will be releasing their third album, The Swamps EP, on October 29. Initially, the band was a trio with former drummer Michael Stasiak, but he decided to quit after their first self-titled album released in 2011. Hamilton and Thomas stuck together, and in January of this year released their second album, Almanac. The duo consider themselves part of the DIY music scene in Brooklyn, writing and coming up with ideas together while a somewhat revolving cast of bass players and drummers contribute to the songs. When they were figuring out the cover for Almanac, Molly went to the craft store and picked up green moss and sticks, glued them together, took a picture of her model forest and made it the backdrop for the portrait of her and Rob. It takes a clever person to be able to be self-made and successful, and it seems like this duo has got it dialed in.

The Swamps was written and recorded in little bits, scattered across hotel rooms during their most recent tour. When they realized that they had a cohesive set of songs, they decided to put it together into an EP and have it ready for their upcoming fall tour. Most of their recording happens in a big barn, where the band sleeps, eats and writes together. “Our process is pretty leisurely, we like to give the music the time it deserves,” says Hamilton, who writes the majority of the lyrics. “The first record, I was writing a lot about missing the Northwest. With Almanac, I think it was a Northeast record. We were writing The Swamps while we were in the South, just about the mystery of that place. I write about places and environment and how they affect people. I don’t necessarily plan it that way, it just happens,” she says.

The Swamps take a step from Widowspeak’s initial ’90s, “Doc Marten meets cowboy boots” sound to something more classic Americana––like Fleetwood Mac or Neil Young, but with an added element of gloom. Hamilton says, “Right now, Rob’s listening to a lot of Brazilian music, like shakers and percussion bits, and that teamed up with the fact that I have more rock n’ roll, country inspiration, makes it funny what the concoction is between our two influences. I can never really figure out exactly what we’re doing.” When asked what her favorite section in a record store is, Hamilton describes re-issues of obscure country or blues singers that are pretty unknown. “We’ve heard some really amazing Indonesian-psych, there’s music from all over the world that has the same sort of cool theme to it,” she says. Widowspeak is already hard at work on their next album, although they don’t want to give it a date or a time frame. Writing for them is cathartic and romantic, as Hamilton says, “It definitely takes time for us to love something that we’re working on.”

Widowspeak is the type of band that prefers a small crowd, partly to alleviate stage fright, but more so because it invokes moments that wouldn’t normally arise. “I think being scared is good for you, you know,” says Hamilton. They have a flair for the delicate, for the unrushed pleasure of a well-written song. They love wide open Texas roads and foggy, ambiguous terrain. They are velvet, lace and a movie projector spinning flashbacks on an old sheet.

Listen to a track from The Swamp EP along with the rest of their discography on their bandcamp and catch them October 26 at Urban Lounge.