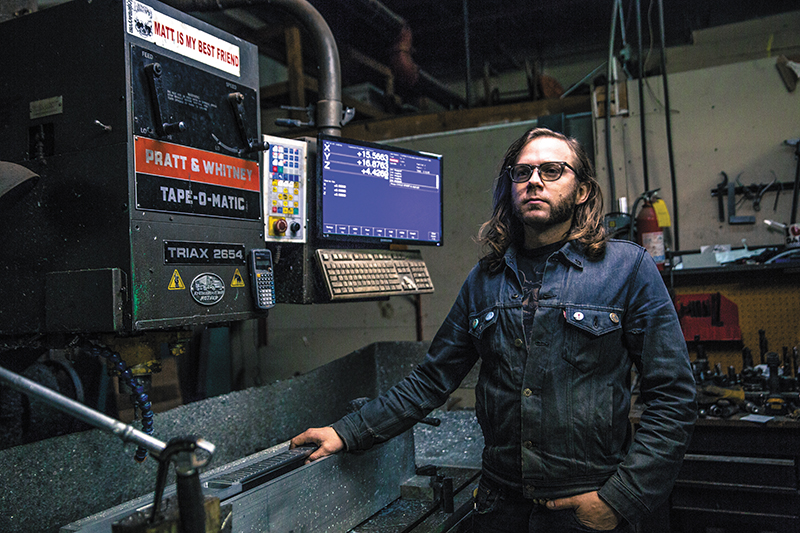 Out of the Woodwork: Four Electric Guitar Luthiers: Duende

Every strong-armed guitarist works hard to hone their craft to deliver a tune, from plucking or sweeping strings. They are the ones who deliver the ballads, tasty licks or bombastic shredding that we all love to hear. On the other side, there are the guitar makers—the luthiers who work just as hard to provide the means to that sound. From a mahogany body with a maple neck or an intricate aluminum neck, a flying V mandolin or a race-car red “violator,” guitars like these are handcrafted and custom-built with gusto and attention to every detail. These four Utah luthiers—Casey Ledingham, Reid Rouse, Moses McKinley and Rob Gray—each exhibit specialized skill sets to spotlight any guitar player’s unique talent.

SLUG: What was the first guitar you ever bought/had given to you? Looking back, did that first experience at all influence how you craft your guitars?

Duende: [My] first electric guitar was a cheap-o Fender. It produced mostly poor Operation Ivy covers. I don’t know where it is now. I imagine it succumbed to its ska wounds. I doubt that poor specimen had much impact on anyone, musically or otherwise!

SLUG: What started your journey of making guitars/instruments?

Duende: Gentry Densley needed one! He had an idea for an aluminum neck-through guitar and had been asking Josh Stippich to produce one at his shop, where I work. I took on the project. Gentry and I designed his guitar together, and it rules. He’s taken it all over the world. I have a few builds for Hex (the gear wing of Eagle Twin) in process now and a few of my own builds as well. Building instruments is massively fulfilling. I enjoy the precision and the design challenge, and the presence and character they lend on the stage.

SLUG: Did you receive any sort of education from a school/mentor to learn how to craft guitars? If so, what/who?

Duende: I work full time at E3 Fabrication with Josh, programming CNC machines and making things. So, my approach to instrument-building is from machining and design rather than luthiery. I like to have the piece leave the mill as close to finished as possible. The build aesthetic is machine-centric.

SLUG: What is the hardest part about making a guitar?

Duende: Finding and slaughtering the beast from which one harvests the gut to stretch as string. Also, machining parts with dozens of operations is nerve-wracking. You run tools on five different planes and then fuck the whole thing to death because of a wrong number in the program.

Duende: [The] biggest challenge is time! [I] need more of that! Seeing a guitar that I’ve made onstage in the hands of a friend is entirely rewarding—and hearing them, too!

SLUG: For electric guitars, what wood do you find best achieves a great sound for anything in the distorted realm?

Duende: I’ve been guilty of picking species just for looks! The majority of the tone [comes] from aluminum, but wood lends color to the tone. Walnut bodies tend to be warm and full-toned, and not overly bright. African mahogany has nice sustain and clarity. Some of the exotics sound killer, too.

SLUG: Regarding some of your photo samples for a guitar you made for Elliot Secrist, you mention that you used a bubinga body and a lacewood access panel. What informed these specific wood choices?

Duende: I wanted El’s guitar to be the flashiest thing known to man, contrary to his wishes. I think he has learned to like it. The bubinga body sounds big and clear, and the sustain is nuts.

SLUG: What inspired your use of aluminum in making guitars? What does aluminum impart to the guitar’s sound?

Duende: The aluminum came first! Making guitars has made me a better and more patient machinist and designer. The aluminum neck has been around for a little while. They were made by Travis Bean and Gary Kramer in the ’60s and ’70s, and Electrical Guitar Co. makes aluminum-neck guitars (including contemporary Travis Beans) today. Aluminum necks add infinite sustain and crazy overtone possibility. They’re weird and magical to work on: The pieces start to show their affinity for noise early in the machining process. El’s build would pick up ghost sounds from around the shop, reinforcing vibrations. When they’re all put together, aluminum necks are easy to control and to pull wild sounds from.

SLUG: What kind(s) of tone(s) do you usually go for in your builds?

Duende: The sound of aluminum being played loudly. I like to incorporate interior shapes that reinforce overtones. El’s build has shapes machined inside that sound with played notes. Go see The Ditch and The Delta play and see what you think.

SLUG: Do you get to craft guitars that you want to make just because, or do you mostly craft custom jobs for people that want them a certain way?

Duende: I don’t have many builds under my belt, yet. We’ll see where it goes. I want to make guitars (and other things) that are designed like they’ve always existed: atavistic, evocative, correct.

SLUG: Have you ever made a guitar that, when you finished, you could not part with, no matter what offer there was that could be made on the guitar?

Duende: Nope. Not yet!