00:00 / 16:39
Spotify Stitcher
RSS Feed
Share
Link
Embed
“We don’t try to be loud at all, we just play at a volume that feels good to us,” says Oliver Ackermann of New York noise-rockers A Place To Bury Strangers. Ackermann supplies the reverb-saturated baritone vocals to the group, who have been labeled as the “loudest band in New York” by various music critics since their formation in 2003. Over time, the label of loudness has become a bit of a nuisance for the band. “We play music, and I don’t think music should really be described."

Worshiping A Place to Bury Strangers 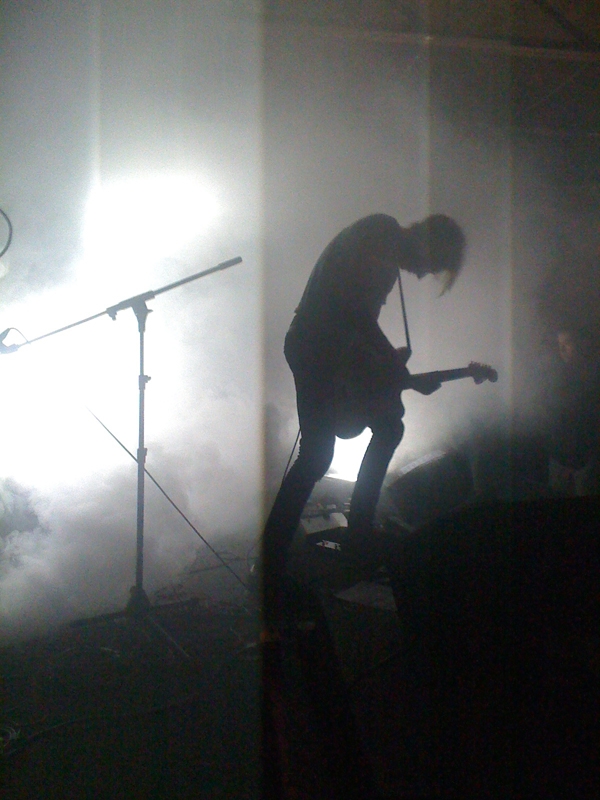 Oliver Ackermann is the only original member of APTBS, having been with the band since their formation in 2003. Photo: AHB

“We don’t try to be loud at all, we just play at a volume that feels good to us,” says Oliver Ackermann of New York noise-rockers A Place To Bury Strangers (APTBS). Ackermann supplies the reverb-saturated baritone vocals to the group, who have been labeled as the “loudest band in New York” by various music critics since their formation in 2003. Over time, the label of loudness has become a bit of a nuisance for the band, along with the repeatedly predictable comparisons to shoegaze legends like Jesus and Mary Chain and My Bloody Valentine that they often receive. “We play music, and I don’t think music should really be described,” says Ackermann.

While APTBS are certainly indebted to the shoegaze bands of yesteryear, APTBS has taken hold of the fuzzy goodness past, reinvented it, and catapulted a new version of the noise into the now, and it deserves attention. The foundation of their music strategically incorporates droning, dreamy riffs, cascading walls of feedback and waves of highly distorted guitars.

On APTBS’ latest album, Worship, the band offers up their most accessible release to date, while continuing to deliver pounding kicks to the cranium in static-laden doses of pulsing drum-machine beats and dashes of pop melodies buried deep beneath mountains of explosive guitars. The biggest difference in comparison to their previous recordings is the sharp production. The sea of noise is still there, but the noise-pop battlefield has been nicely groomed, making it easier to catch the nuances.

During the making of Worship, as a collective, the band headed up every role in crafting the album. They tackled all jobs from the construction of their amps and effects pedals to writing, recording, mixing, producing and mastering their own music. The songwriting took place over a two-month period, and the songs were recorded over the course of a year. “All of the songs were written really fresh and off the cuff, and I like that. It was a very pure and raw way to work,” says Ackerman. “We got to experiment with the recording processes and let the album develop naturally.” Every song is built to stand on its own and designed to draw you in from first listen. When asked if he favors any of the tracks, Ackermann says, “I like them all … Honestly, we don’t like to release filler—if we didn’t like it, we wouldn’t release it.”

Ackermann is also the owner of the now-successful amp and pedal manufacturing business, Death By Audio, where he is a designer and a maker of extreme guitar effects pedals. A decade prior to forming APTBS, Ackermann graduated from the Rhode Island School of Design with a degree in industrial design. Returning to his hometown of Fredericksburg, Va., he formed the psychedelic shoegaze band Skywave. Influenced by bands like Slowdive, Ride and Spiritualized, it was while he was the guitarist for Skywave that his love and collection of noises began. He was always in search for the perfect fuzz and distortion. When his searches continued to end in disappointment, he took it upon himself to start tinkering and building guitar effects pedals for himself. Once he grew confident in his building, he began customizing equipment for friends and fellow musicians. During 2002, Ackermann was trying to raise funds for a trip to Europe with his girlfriend. He had designed a pedal he called Total Sonic Annihilation and had the idea that he should try to sell his pedals. After a month of sales, he sold enough units to go on vacation. Upon his return from Europe, he was greeted with an overwhelming amount of requests and orders, which led to him starting DBA. “I am so lucky I get to do what I love to do—I can’t complain,” says Ackermann.

DBA, which has expanded to include a music venue and live/work space, has gone on to design guitar effects pedals for musicians like Trent Reznor of Nine Inch Nails, U2’s The Edge and Jeff Tweedy of Wilco. In 2008, DBA had the opportunity to design some equipment for My Bloody Valentine’s main man, Kevin Shields. “He is a super-nice guy and has been a huge inspiration over the years. It is sort of a dream when you get to meet people who have been such an inspiration to what you do, and he definitely has,” says Ackermann.

Ackermann incorporates his industrial design talents into his work with APTBS as well, building a variety of new tools while making their latest, Worship. “I designed a lot of new effects, a few different preamps, compressors and rack clippers for the recording,” he says. “Since we recorded for a whole year, I really started to get into designing rack gear. I’ve got some good things for the future of DBA.” The biggest challenge with pushing Worship forward was recording the drums. “We tried to do as much without editing, so the drums had to be played very precisely,” says Ackermann. “That probably took up about 10 of the 12 months of recording. We were constantly going back and scrapping takes and having different drummers rerecord the parts.” The end result, however, is stellar.

Over the last two years, the band has gone through a few changes, which include their lineup. Today, Ackermann is the last founding member of the group. In 2010, longtime member Jono Mofo parted ways to spend more time with his family, and was replaced with bassist Dion Lunadon, formerly of The D4. Lunadon came from the New Zealand garage-punk scene, and his contributions on Worship run deep. He took on the title of co-writer and played a major role in evolving the new direction of APTBS. He pushed the bass into the foreground and managed to make it just as aggressive as the guitar. He also brought his influence of psych-rock, grunge and post-punk to the mix, which balances nicely with Ackermann’s already abrasive guitar work. “We were looking for a bass player and conned Dion into trying out. It has been so great playing with Dion—he is a killer bass player,” says Ackermann. Drummer Robi Gonzalez also joined the band earlier this year, replacing former drummer Jay Space. Another noticeable change within the APTBS world was making the move from Mute Records to the Dead Oceans label. “Mute was a great label, and Dead Oceans is as well. I think we changed as a band and wanted everything we were associated with to change,” says Ackermann.

The band has shared stages with Brian Jonestown Massacre, Black Rebel Motorcycle Club and even Ackermann’s beloved Jesus and Mary Chain. The live setting is a whole different medium. The band takes their time translating what they produce in the studio with what they produce live, onstage. The stage is a canvas. “If something doesn’t work out live, we change it or rearrange it to make it work,” says Ackermann. “I love being able to create music that I can listen to later, and I like to share the vision I have for what a live show should be with our audience.” When APTBS perform live, you literally feel every bit of sound they produce through the core of your body. Their shows have become one of their biggest strengths—they offer up unexpected executions of each track, which keep their audiences coming back for more.

With the band touring constantly, it’s amazing that they manage to find any time to record new material. “We love to record music, so any chance we get, we do it. We live our lives to play and record music,” says Ackermann. This year alone has seen two releases from the group. In February, they released the EP, Onwards To The Wall, and four months later, we were treated with their third full-length, Worship. “I am a firm believer of finishing things and moving on, so if we release these records now, the sooner we can focus on where we are going in the future,” says Ackermann. “The intention of each album is pretty much just to document our lives and feelings as they come about.”

At the time of this interview, APTBS was on tour in Europe. The band has played a variety of festivals and clubs. I asked Ackermann if he prefers the small setting over a festival crowd. “I like small clubs, but a festival can be more fun. I just like being with the audience when playing. A show should be sweaty, messy and fucked.” Salt Lake should be able to provide an ideal audience when APTBS stop by Urban Lounge on Nov. 8 with the Philly garage group, Bleeding Rainbow. “[Bleeding Rainbow] are rad—such a cool-sounding band,” says Ackermann. “You should definitely go and see them, even if you don’t stick around for us.”