SLUG Mag Soundwaves
Episode #395 – Cotes
00:00 / 18:06
Spotify Stitcher
RSS Feed
Share
Link
Embed
To me, “songwriting” usually evokes an image of deadbeat longhairs dinkin’ around on their instruments and crushing PBR cans one after the other, as any vestiges of the “creative process” dissipate into trite stereotypes of punk or indie musicians. Parquet Courts, however, generate images of notebooks and struggle. Guitarist and vocalist Austin Brown says, “[Andrew Savage (guitar/vocals) and I] both just write a lot … Through the practice of writing, sometimes, on those good days, I can sit down and a song will come out or a lyric will come out that I can feel inspired by later.” 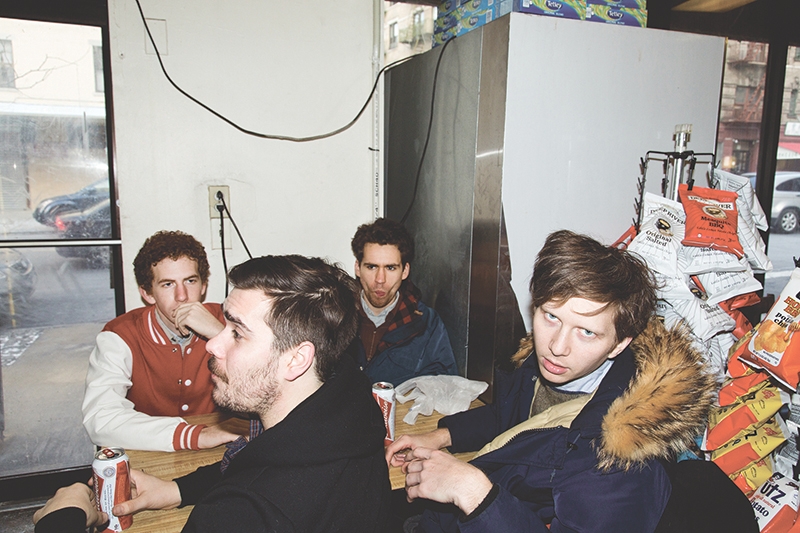 To me, “songwriting” usually evokes an image of deadbeat longhairs dinkin’ around on their instruments and crushing PBR cans one after the other, as any vestiges of the “creative process” dissipate into trite stereotypes of punk or indie musicians. Parquet Courts, however, generate images of notebooks and struggle. Guitarist and vocalist Austin Brown says, “[Andrew Savage (guitar/vocals) and I] both just write a lot … Through the practice of writing, sometimes, on those good days, I can sit down and a song will come out or a lyric will come out that I can feel inspired by later.” Listening to Light Up Gold, their sophomore album released on What’s Your Rupture? this past January, it’s no wonder that they’ve been creating a buzz over the first part of this year. Their simple, Modern Lovers–meets Pavement sound maintains a sense of minimalism, yet the album presents listeners with a challenge, a crookedness. As I witnessed at SXSW in March, Parquet Courts exhibit a nonchalant, enigmatic energy at their shows—it’s engaging, and they’re coming to Salt Lake City.

Parquet Courts began in Brooklyn in December of 2010, and released their first album, American Specialties, in 2011. During their time in this band, Brown and Austin, the two main songwriters, have transcended the idea of solely being musicians by way of their writing habits. Light Up Gold follows simple song structures, where each track has, on average, about two parts, the guitars play simple chords, and drummer Max Savage (Andrew’s brother) usually plays straightforward rock beats. The melodies that Brown and Andrew supply each other, though, create a noodly counterpoint that makes the songs on the album difficult. Before any instruments enter the equation, Brown, speaking for himself, says that he writes short stories, plays and poetry, and that the two have both submitted work to Tasty, a zine, and reviews to The Talkhouse. From there, jamming with Max and bassist Sean Yeaton mnemonically summons the guitarists/vocalists’ writing: “[If we] get a good groove going, Andrew or myself will just grab our notebook real quick and flip to a page of whatever we have written down and just spill it down on top and see what sticks,” says Brown. Their approach to making music comes across as uncontrived—listening to “Master of My Craft,” the first track of Light Up Gold (which Brown wrote and sings), exhibits Brown’s knack for making rock n’ roll. His delivery of “Death to all false profits around here we praise a dollar you” in the song retains a lackadaisical hip hop swagger amid the song’s garage-band catchiness while he references New York scene politics, obfuscating the subject matter of his struggles with coming of age as an artist.
“The songs that I wrote that are on the record are based on specific events,” he says, whereas Andrew succeeds at being direct and referential to various pieces of a narrative puzzle, but in a “tasteful way,” which lends to his knack for imagery. Andrew’s lyrics, written out, appear as uninterrupted chunks of text that comprise a song (as opposed to Brown’s stanza structuring), and come off as being more stream of consciousness: “N Dakota” reads, “Train death paintings, anti-meth murals color the ghettos of N. Dakota. Bismark tractor association, coffee and toothpaste. This was vacation.” Parquet Courts are quick to inform writers and media types of the authorship of each song before being interviewed. Though it is to help avoid misattributions of one band member to songs they didn’t write, it’s an interesting lens into the way Brown and Andrew create, respectively (Yeaton wrote and sings solo on one track on Light Up Gold, “Disney PT”). Brown, aurally, comes across as more laid-back, while Andrew emits succinct, choppy spurts of language, which solidify each song’s rhythm.
Perhaps the method by which Parquet Courts have succeeded the most is their devil-may-care attitude to the final product when they’re creating. “Honestly, I try not to consider the audience whenever I’m writing and recording music. I think that’s where a lot of bands go wrong, and also, a source of great anxiety for me,” Brown says. “I think that we just write music that we like, and we try to write it to be immediately satisfying for us to play and to hear … To even consider [the audience’s] opinion in the creative process is a huge mistake.” Up through their recording of Light Up Gold, the band’s songs were still being developed, whether through gradually shaping a song over the past couple years, such as with “Yr No Stoner,” or writing it during their three-day album recording session, like with “Careers In Combat,” in which both Brown and Andrew sing. With either approach, Brown asserts that nothing in Parquet Courts is calculated, and the final manifestation of their songs is what happens in the studio.
Besides hitting Salt Lake at Urban on June 18, Parquet Courts have been staying busy, and recorded a new album between the end of April and beginning of May, which will be released at an undecided date. Keep an eye out for this band, and make sure to catch them when they drop by. Brown says, “I hope to see everyone there … They’re filming the sequel to SLC Punk at our show … I’m not supposed to tell anyone—it’s supposed to be a secret—but I’m telling you so you can spread the word.”
Photos: