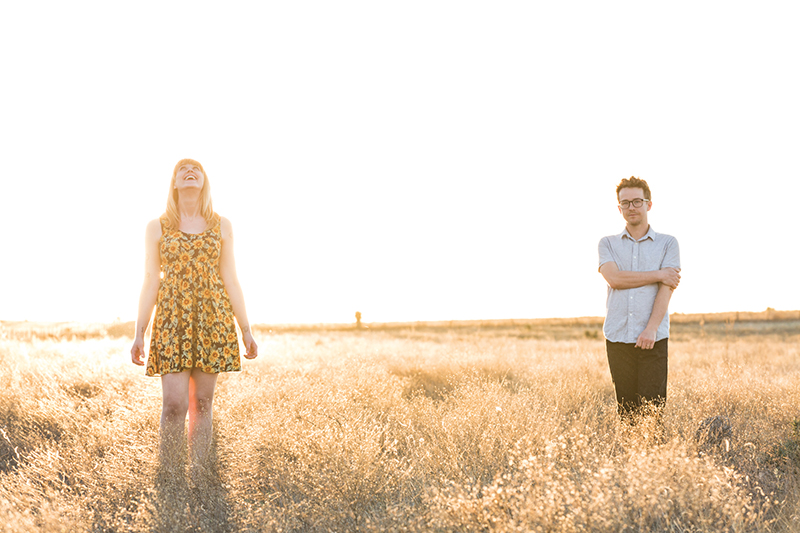 Wye Oak: On Making a Not-Album

“We’re in a really good place,” Jenn Wasner says, and you can hear the relief, accomplishment and mild surprise in her voice. With over a decade of writing and playing experimental rock with her counterpart and musical life partner Andy Stack as Wye Oak, the pair is breaking barriers and moving forward into the future on no uncertain terms. After their critically acclaimed Civilian, the band worked through self-doubt and writer’s block until Shriek emerged from the shadows: a confidently different album that validates their struggles.

In between this redefined sound and an itch to keep the ball rolling comes Tweens, a collection of songs that doesn’t belong but is screaming to be heard. From ’70s dream ballads with electric keyboard backbones to drum-heavy tracks that fall like hard rain to searing yet soft guitar soundscapes, Wye Oak will have you believing that there is beauty in miscellany and misfits. If there’s anything to be said for the phase of life that the album is named after, it’s the gleaming optimism that comes with knowing that you’ll someday outgrow your awkwardness and take the world for all it is.

Wye Oak’s music continues to flourish, even across many state lines. Wasner has taken up residency in a tiny house in the woods of North Carolina, while Stack is currently residing in Texas. She explains how living far away from her sole bandmate is working out. “We both find that we need a lot of space and time to make things,” she says, “and so our situation right now is ideal for that because we can spend a lot of time on our own, in our own spaces, recording and brainstorming and daydreaming before coming together to work on Wye Oak.”

Balance is a constant for Wasner and Stack, who have been playing together since they were young teens. They made a conscious choice to be a two-piece in the beginning for reasons of efficiency: It’s a lot easier to only work around one other person’s schedule and demands, rather than those of a whole damn band. “It really helped us say yes to more than we ever would have been able to otherwise,” says Wasner. “It was a big part of not only logistically what we were able to do, but also how we sounded.”

What does it really mean to be in a band with one person for 10 years? Wasner explains that it’s an emotional and psychological experiment to have that sort of long-lasting relationship with another person. Just like in many romantic situations, a major part of staying interested and connected is allowing themselves to be two individual people with different lives, interests and projects. Each have worked on projects outside of Wye Oak, which brings an appreciative excitement to their bond. “That sort of shared history isn’t something that you can just build up overnight,” Wasner says.

Working as a duo has forced Wye Oak into making creative decisions based on their limitations, and those limitations have become jumping points for inspiration. The two discovered in writing Shriek that less is more. “The point wasn’t to rid myself of guitar forever, but to expand the palate of sounds and instruments that I was ‘allowed’ to work with,” Wasner says. “So now, when I sit down to write a song and I’m in my house with all my stuff, I don’t have to think about, ‘Well, this is a Wye Oak song, so I guess I have to play guitar.’ If I sit down and write a song on piano—guess what? It’s a song and it counts.”

Wye Oak surged through self-imposed restrictions and are able to freely create together. Releasing Shriek put the duo in a state of mind where anything is possible—a breakthrough that may be the reason for calling Tweens a “not-album,” as it lies outside the preconceived ideas of a typical record. “Sometimes you have stuff where it’s like, ‘I love this and I want to share this with the world,’ but the format doesn’t exist, so at that point, you have to create it,” says Wasner, “and I guess that’s what we’re trying to do.”

Both members of Wye Oak rely on outside projects as outlets to make them better songwriters and musicians. Wasner is currently wrapping up her first solo album under the guise Flock of Dimes, which is due to be released in September 2016. She says coyly, “It’s the best thing I’ve ever done.” As for Stacks, you can spot him playing with indie rockers El Vey.

Wye Oak are heading out on tour this summer and will be in Salt Lake at Urban Lounge on July 9. If you stop by, you’ll be treated to a grab bag of a set, as they’ll be digging up old tracks from their back catalogue (possibly even some that have never been heard onstage) in addition to tracks from Tweens and a few newbies as well. You’ll want to catch this band as they are now—flushed and unapologetic.