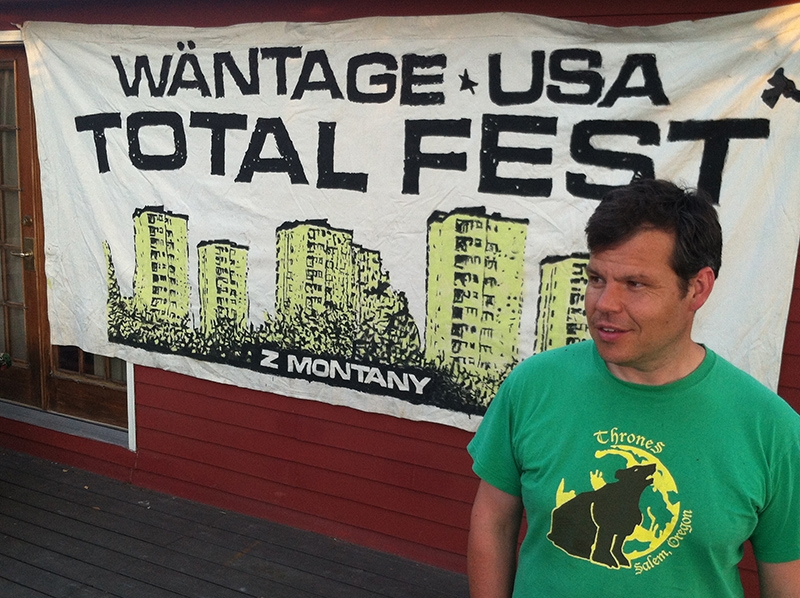 There’s nothing worse than going to a music festival to see bands that you’re super stoked to see, only to have to deal with hyper-active fashionistas, phones obscuring your view of the stage, long beer lines and even longer lines just to take a piss in a Honey Bucket that houses the excrement of some kid who took too much molly. Imagine something better, though. Imagine a festival without the nasty side effects. Imagine a festival where you could see killer bands like Shannon and the Clams and Wolf Eyes, Kitten Forever and White Night, for only $50 and only a seven-hour drive away from our beloved Salty City. Imagine a festival where you could float in a river in the pristine mountains of Montana by day and bounce around venues in a small town to hear genuine music in a welcoming environment by night.

Sounds too good to be true? Well, mark your calendar and start coordinating a carpool: On Aug. 14–16, Total Fest is going down in Missoula, Mont., for a three-day DIY fest that’ll melt your face off.

Josh Vanek is the lead organizer and head of the Wäntage USA record label (whose name might be familiar—they’ve released works by Salt Lake artists such as Le Force and Vile Blue Shades, RIP). He has Total Fest right where he wants it to be. A low-key, intimate festival now in its 13th year, Total Fest showcases a surplus of stimulating bands from all over the nation, while leaving space in the lineup for awesome Montana bands. Total Fest delivers what bigger festivals can’t: small-town vibes and big-city sounds. What started in 2001 as a solo venture to create a one-day event that cost under $10 has grown into a three-day festival organized by a team of several volunteers who work together to coordinate the lineup, venues and hospitality.

As the festival has evolved over the years, there are aspects that Vanek says will always be constant: It will always be all-ages; it will always have regularly priced beer; it will always have a welcoming vibe where you can camp out in someone’s backyard and check out bands you might not get to hear otherwise. For this year, Vanek says, “There’ll be a visual-art component to Total Fest, and that will be something that we’ll probably look to expand in the future.” The first night will be held at the Zootown Arts Community Center to include art pieces and installations. “Mostly, we don’t want to change it too much,” he adds. “In some ways, I don’t really want to see it change much at all.”

Finding their way to the sweet spot between being able to book awesome bands while keeping it a low-key event is due largely to the crew that helps coordinate the festival. Of the volunteers, Vanek says, “Part of being on a team of people that helps to curate the whole thing means that we have people with really cool music taste that have sought out weird bands that nobody’s heard of from around the country.” The only downside of this diversity is that “We all have our individual taste and we try not to make the fest about just one style of music, but we probably have twice the awesome bands than we actually have festival space to accommodate,” Vanek says.

Besides focusing on awesome music, Vanek wants to push the festival as a community-centric event, and thus the record swaps and informal river floats are a part of the package deal. Bryan Ramirez—a local who runs his own label, Killertree, and plays in Chemical Lawns (part of the lineup at this year’s event)—organizes the record swap and makes sure to have a hand-selected collection that will please the music nerds that find their way to Total Fest. Not only would it be wise to stash extra cash for the record swaps, but you never know which band you might fall in love with during the event, and there’s no better way to support an artist than to purchase some sweet merch.

For a festival that focuses purely on artistic rather than commercial aims, there’s nothing to lose. Total Fest is based on having a good time and kicking it, and it is open to anyone looking to explore a new horizon of fucking rad bands. For more information and to preview the bands, be sure to check out wantagetotalfest.blogspot.com.