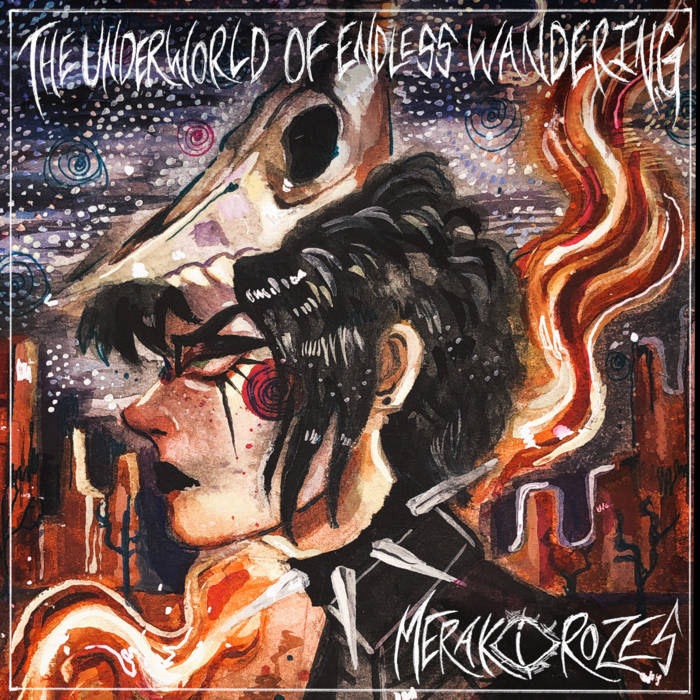 Merakirozes
THE UNDERWORLD OF ENDLESS WANDERING

I’ll be frank: I was skeptical when I began listening to this album on my drive down Parley’s Canyon. It was six-o’clock and dark out after a tiring day of work, and I wanted something to chipper me up. (I was hoping the album title would be ironic.) Alas, the beginning tracks, “SETTING FIRE TO MY HOUSE” and “FRAIL LUNGS,” are a bit on the arbitrary, miniscule and quiet side… I was very close to calling quits. Then, I heard these drums: repetitive, powerful drums that awoke my ears. Then lyrics—lyrics so intriguing and quick that you completely become drawn to the mixture of drums and words. “DESOLATION” is the track that should be the start of this album.

Merakirozes, also known as Meraki (or Corvid), is a 17-year-old, Utah-based artist, who created this LP all on their own. Well, other than the help of GarageBand, which truly blew me away. The details are impressive, especially considering how articulate and clear the sound is throughout. Meraki not only builds this alternative afterlife in the music, but a mysterious allegory that takes place in an imaginary desertland. Notes of alternative goth-folk are apparent and even a touch of electronica can be heard in “DESOLATION” (again, a great fucking song).

You can’t deny the intensity and fight. For instance, “EYE OF THE STORM” has powerful chanting vocals and an all-around memorable rhythm with both highs and lows, like seeing lightning during a humid monsoon. It’s there and gone and the air feels both fresh and suffocating. “RAINED AND RAINED AND RAINED FOR DAYS” continues this streak but is definitely more approachable, a song you can put on speakers without having your parents worry about you. “SHAPESHIFTER” offers the most Americana. Catchy, folky, stealthy—possessing the strength and boldness like Adele’s earlier years when vulnerability was something still difficult to grasp.

I can imagine, with this type of music and creativity, that Meraki can easily find themselves having a solid cult following someday—something similar to or along the lines of Dave Bixby or Jonwayne. Meraki’s maturity and macabre subject matters are endearing—a challenging puzzle to put together. I’d love to see them perform live and get a glimpse of the persona that’s standing. Someday, Meraki. Someday. –Kassidy Waddell