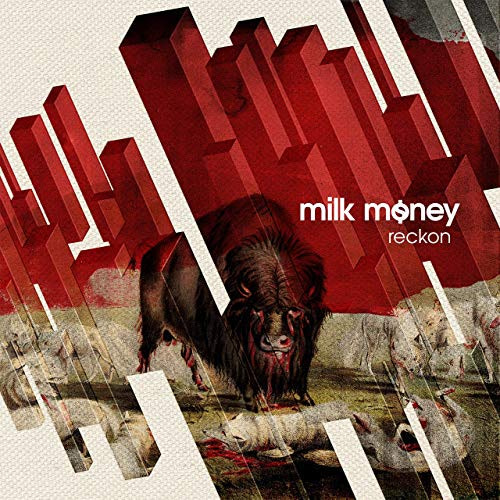 As you press play on Milk Money’s debut album Reckon, you may think that you’ve been transported back to 1990.

You may ask yourself, “Am I in a time warp?” The answer is … sort of. While the ’90s were permeated with grunge, the world has since moved on. But like many trends, grunge seems to be making a comeback, and it’s not a bad thing. Milk Money has taken their grunge inspiration and given it a modern twist, letting you experience something new while feeling comfort of the past.

The album starts with the track “Gravity of Sin,” with frontman Dan Fletcher’s hoarse voice and rhythmic electric guitar giving off major Kurt Cobain vibes. But as the song moves further, you’re greeted with heavier strumming and more energy. At the same time, the lyrics evoke the feeling of being alone, and of being a survivor who can rely only on himself; much like a cowboy. Milk Money have expressed that this album is a “ride through 1990s rock styles and 1890s cowboy mythology.” This is evident on the first track, as Fletcher sings, “You don’t know / What it took / to be the only one left standing,” and, “I’ve survived / Heinous crimes / That would tear your soul straight out.” These lyrics simultaneously sound like passages Kurt Cobain or Layne Staley would sing, but also expresses the sentiment of how cowboy living life in the wild west would feel. Who knew cowboys and grunge bands had so much in common.

The album has heavy grunge influence, but there are sounds that are more akin to alternative/punk groups such as Green Day. The group has openly stated that Nirvana and Green Day are some of their influences, but even without knowing this listeners, would pick up on the similarities. Songs such as “Bitter Trail” have a heavy and fast rhythm while slapping you in the face with the opening line, “Who the fuck do you think you are? / Burrowing into my heart.” Being in Utah, it’s hard not to imagine what it was like here during those wild west times. Milk Money captures a snapshot of those feelings in all of their songs, telling stories of cowboys wandering through the desert, pioneers succumbing to plague and outlaws awaiting death.

The energy of Milk Money’s Reckon is hard to resist. As mentioned earlier, their sound hearkens back to a wonderful time in rock and roll, but they also bring a fresh take to it. From beginning to end, listeners get to enjoy great rock, but also get an exciting array of stories based on the band’s desert home. It’s fun when artists are able to blend such seemingly unconnected topics, but Milk Money does an exceptional job. –Emilee Atkinson