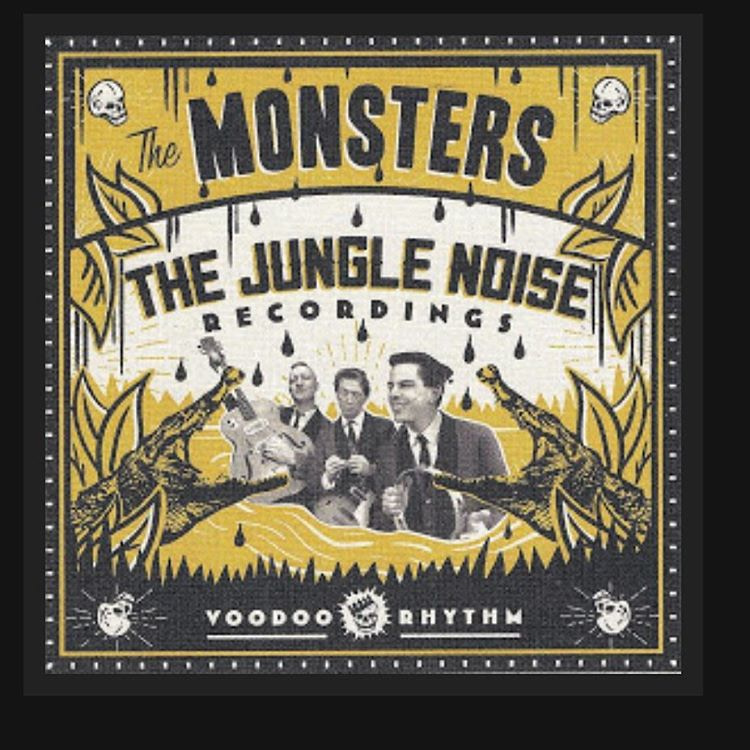 The Monsters
The Jungle Noise Recordings

Voodoo Rhythm Records
Street: 04.08
The Monsters = The Sonics + The Jackets

From the gritty streets of Bern, Switzerland, comes the raw and primitive recordings of The Monsters. Fronted by Beat Zeller, aka Reverend Beat Man—owner of Voodoo Rhythm Records—the band formed in 1986 and made a name for themselves as a wild garage rock–meets–rockabilly outfit. They toured Europe and presented themselves as a force to be reckoned with. The Jungle Noise Recordings was originally recorded in 1994 and was the first album that saw The Monsters use an electric bass rather than an upright. The album was recorded at home instead of a studio so that the record could better boast the raw elements of The Monsters’ sound. It was originally released as 10” record via the underground German label Jungle Noise. After The Jungle Noise Recordings came out, The Monsters conducted a lengthy tour that saw them established in the Europe’s rock n’ roll scene. Giving this compilation a thorough listen some 20ish years later, I can see why.

The Jungle Noise Recordings should be considered an essential part of any angsty rock n’ roller’s collection, especially if said individual is still completely able to pride themselves on being full of piss and foul-smelling vinegar. Make no mistake: This album exudes an attitude that exemplifies the dirty thrash-driven desires of gutter-inhabiting rock n’ roll. All one has to do is simply switch on the first track, “Psych-Out with Me,” to get doused in its volatile, soul-stirring sounds. Its fuzz-driven power is enough to make any young, lustful thing dripping wet. The same experience can occur with the track “Primitive Man”—totally a song to enjoy the primal nature of teenage kicks. Overall, this record contains some impressive rock n’ roll that must be heard loud enough to distinguish friend from foe. Other notable tracks include “The Pot,” the rough and grooving “Rock Around The Tombstone,” Skeleton Stomp” and “Nightclub.” I would also urge listeners of this record to consider the rambunctious nature of the covers of The Rolling Stones’ “Play With Fire” and Kip Tyler’s “She’s My Witch.”

To acquire The Jungle Noise Recordings would suggest that the buyer possesses refined taste. This record is the perfect representation of rough and gritty rock n’ roll. The Monsters deliver music that is made to stir trouble with and sounds to satisfy only the most primal animalisms to. Apart from the original recordings that could be found on the previously released 10” record, this compilation also has bonus tracks, which, to translate, means more to get on and going with. So, watch out and don’t miss The Jungle Noise Recordings, as it’s a compilation that would best be found among your choicest of records that underscore your ability to have controversial nights of dangerous fun. No doubt, such a record would allow anyone to enjoy the finer things in life—or at the midnight hour. –Nick Kuzmack