Review: Warmaster – The End of Humanity 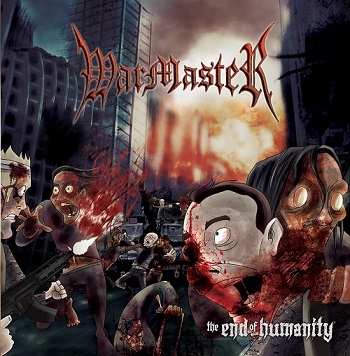 Warmaster
The End of Humanity
Dead Beat Media/Slaughterhouse Records
Street: 10.30
Warmaster = Bolt Thrower + Humiliation + Benediction
After a bomb-bursting display on the release of a split EP with fellow old school Bolt Thrower worshipers, Humiliation (which was released by SLC’s own Slaughterhouse Records) the Netherlands firing squad that is Warmaster have plenty of napalm left in the tank for their second full-length, The End of Humanity. Considering Bolt Thrower are a fucking great band, I have no quarrel with them emulating the aforementioned band—it’s pretty obvious that War Master got their name from Bolt Thrower’s third full-length album. Chunky, even what I’d describe as blocky, riffs dominate the album, with a bottom-end filled out by a syrupy thick bass sound continuously rip out the riffs to satisfy any old school death metal fan’s palate. If you’re not stuck with a few 50-caliber rounds in your gut after blasting this I don’t know what you just listened too. –Bryer Wharton
Photos: