SLUG Mag Soundwaves
Episode #399 – Scott Lippitt
00:00 / 17:04
Spotify Stitcher
RSS Feed
Share
Link
Embed
YOB is a three-piece band from Eugene, Oregon. Their sound emanates principally from the burly Mike Scheidt, whose guitar style is virtually unmistakable. It consists of huge, frequently grooving and throbbing guitar riffs made almost lush and orchestral not with distortion so much as thick dissonance. The result is a dense sonic mass which Scheidt continually cuts and tears asunder with a sudden ringing upstroke, which has become his musical signature. 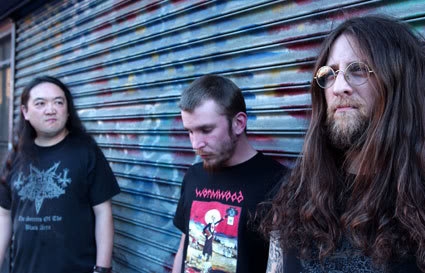 Most artists who have nothing to prove, be they painters, writers or musicians, will have achieved this privilege of supreme indifference after years of struggling toward universal recognition. They have become living legends whose mere autograph can convert an otherwise empty canvas, or even a stray napkin into a collectable or exhibitable work of art. Though far too often, as we know, the status of having nothing left to prove equates to having nothing more to say. For what, we are invited to consider each Independence Day, could ever be as grand and glorious as the past? In contrast, no band on the circuit today, irrespective of genres and labels, has kept it more real and full of the eternal now than doom metal gurus YOB.

YOB is a three-piece band from Eugene, Oregon. Their sound emanates principally from the burly Mike Scheidt, whose guitar style is virtually unmistakable. It consists of huge, frequently grooving and throbbing guitar riffs made almost lush and orchestral not with distortion so much as thick dissonance. The result is a dense sonic mass which Scheidt continually cuts and tears asunder with a sudden ringing upstroke, which has become his musical signature.

Five massive albums into their career, and verging on the release of a sixth, YOB, despite receiving sincere and lofty praise from no less established a source than the New York Times, remains largely unacknowledged. As evidence of this fact, consider YOB’s July 4 performance at Club Vegas. Even with free barbecue advertised (to sweeten the $10 bargain), and the support of local bands Bird Eater and Eagle Twin, along with St. Augustine, Florida’s crusty and sinister Dark Castle, the bill drew a total audience of no more than forty faithful souls.

Here was a band that was no longer especially young. Scheidt’s own children, of whose artistic gifts he spoke with great admiration and humility, are already approaching college age. And here was a band that had no particular hope of suddenly earning a place within the hearts and minds of any incipient YOB army.

Nevertheless, Scheidt and his colleagues, unprepossessingly taking the Club Vegas stage in attire appropriate to fetching the Sunday morning paper, proceeded to deliver to those present in the little black-box bar, a performance of such astonishing zeal; zeal for heavy metal, yes, but, beyond that, zeal, one is tempted to say, for the very spirit of music, per se, that it became immediately and entirely apparent YOB inhabited a sphere, breathed in an atmosphere superior to all petty concerns for popularity and gain. YOB had no need to demonstrate that they still had it or would yet find it. Equally capable of conjuring the dynamical and mathematical aspects of the sublime, the most crushing riffs of Biblical wrath and the most barren wastes of Gnostic desolation, YOB simply YOBBED, which amounts not merely to playing music, but re-creating it, continually renewing and expanding the full spectrum of what it is possible to hear and feel through tuned instruments.

YOB strode through a set lasting approximately fifty minutes, one consisting of no more songs than could be counted on one glove. The show began with “Quantum Mystic”, an eleven-minute paean to yoga breathing and cosmic union, whose opening riff offers sincere but playful tribute to the famous Dr. Who theme, by BBC Studio’s Ron Grainer and Delia Derbyshire. From the outset, YOB showed not only a sense for dynamic range that entirely escapes most metal bands, but also a capacity to use silences tastefully and in a manner which achieves genuine profundity.

Atop Scheidt’s colossal guitar sound (generated from a Monson Nomad, Emperor cabinets and a bare minimum of basic effects pedals held in a random gym bag) rises a voice singular in metal. YOB vocals are remarkably complex for a metal band. They include all the grunting and bellowing which have become standard within the genre, but Scheidt unexpectedly offsets and complements these with a repertoire of hisses and whispers one never hears in metal.

To the uninformed, it might seem YOB had multiple vocalists, when the fact is that Scheidt has multiple voices. The most remarkable of these remains a shimmering falsetto wail, now saturated with diabolical menace and now with piercing melancholy, a cry which seems to issue from beyond the outermost rim of reality.

There may be no shortage of metal bands these days who can soundly punish, but how many could justly claim, as can YOB, to achieve actual poignancy? How many bands, by pushing through to the other side of metal, ever arrive at a moment of reversal and grace in which darkness and malice are unexpectedly transformed into a sweetness and light beyond all thought of good and evil? Such is the power of YOB. The evening’s great example of such a small miracle was the band’s willingness to honor a fan’s request and conclude their set with the nine-minute “Grasping Air”.

Scheidt, at this point, handed the microphone over to Stevie Floyd, ubiquitously inked and witheringly authentic rocker chick, and vocalist and guitarist of Dark Castle. As the final dirge slouched slowly towards mayhem, I looked about the small gathering of fans and saw not heads banging and horns jabbing, but instead a small constellation of beaming smiles. YOB played on. When the performance ended, sincere thanks and gooey hugs were freely exchanged between audience and band. “What the fuck just was that?” was everybody’s question.

When speaking with Floyd and Scheidt after the performance, I found both were quick and eager to agree that metal, for them, was all about the love. “I’ll admit it,” added the bearded and bespectacled Scheidt, “we’re really a bunch of hippies.” We continued our conversation during loadout and covered a variety of topics; metal, choral music, the anthropology of religion. Scheidt, it should surprise no one, is an avid reader of spiritual texts.

It struck me as I stood in the parking lot with him and his touring partner Stevie Floyd, that Scheidt’s approach to music comes remarkably close to St. Augustine’s reading of St. John’s Apocalypse. According to this Father of the Church, the thunderings and outpourings of fire we read about do not represent literal events, or even the rage of an jealous God. Rather, the smoke and lightning represent, poetically, the passions of the human soul in a state of profound inner transformation.

The Apocalypse should be read not as a celebration of death and the end, but rather as an affirmation of life and new beginnings. The subtext of the Book of Doom is Love. Of course, other bands will read things differently, but I prefer the word according to YOB.

YOB and Dark Castle continue their tour of America with thirty more domestic dates. Soon after, they will begin a thirty-show European tour. A new YOB album, Prepare The Ground, is scheduled for release, by Profound Lore Records, in August.