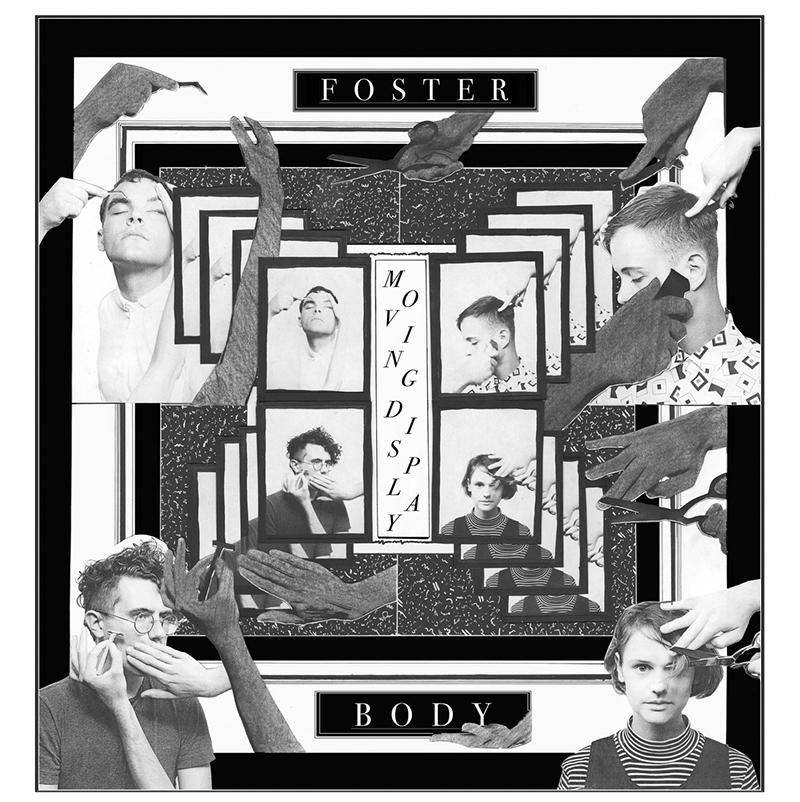 On Sept. 24, 2015, I violated every known traffic law, except vehicular manslaughter, to gawk with deep endearment at A Place To Bury Strangers. Unexpectedly, I arrived with plenty of time to spare; however, another band furiously ripped through their set—theirPink Flag wall-of-sound assault on the audience’s auditory sensibilities—whose name stuck with me ever since: Foster Body. The Oliver Ackermann–approved four-piece re-imagined the post-punk language of Gang of Four and Wire, all the while crafting something new with something reverentially older.

Moving Display transcends any historical precedent with minimalistic mastery. Korey Martin percusses the guitar. He refrains from playing it the way five minutes in a Guitar Center painfully reminds one of why that very instrument demands a stylistic revival. Martin punishes it, forcing out of it sounds both grating and fierce. “Safe Betrays the Medicine” sees Martin and the charismatic vocal shape-shifter Robin Banks accompany their head-first approach into joyful destruction. “Touching & Moving” sees Banks and bassist/vocalist Dyana Durfee exchanging barbs, ear-splittingly screaming “I am just killing time!” The social commentary alone would yield a consenting nod from Jon King himself. Yet, seeing “Touching & Moving” with contemporary eyes certainly reveals how prescient it is that our narcissistic ways have diminished our appreciation for leading more meaningful lives.

Beneath Foster Body’s underlying social commentary is an intention to begin conversations that are not being had, to remedy some of contemporary society’s conspicuous issues. “This is a continuing conversation,” yells Banks on the infectious, atonal track “Tune out, Give in, Nod off.” Technological stimulation has made people less stimulating, and the only remedy is to connect in a way where technology cannot interfere.

Therein lies Foster Body’s power: to connect both on a musical and cerebral level. Summoning Entertainment-era Gang of Four on “Content,” with Andy Gill’s expressions found in Martin’s playing and the band’s thwarting backing vocals, fails to hurt the band in any way, in spite of the band’s glaring influence. More importantly, however, is how the band fuses its influences and worldview, making them distinct in spite of sounding familiar. –Stephan Wyatt