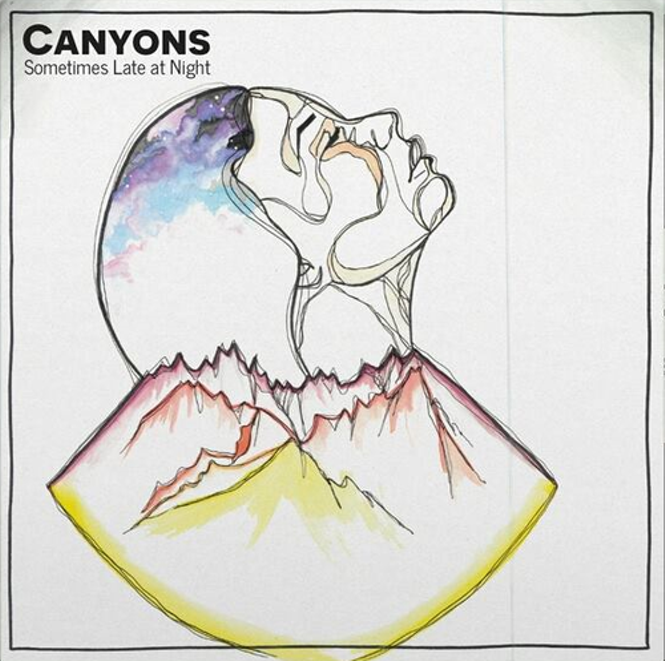 Canyons are a trio of badass gals: Kate Anderson (lead vocals/rhythm guitar), Secily Saunders (lead guitar/vocals) and Hillary McDaniel (percussion), with guest artists Kenyatta Kennedy (bass/vocals), Heidi Nedreberg Middleton (vocals) and more. Each member brings her unique musical experiences into their newest EP, Sometimes Late at Night. Though Canyons are a local band, they each bring influences from their hometowns, drawing inspiration from the Western and Mid-western territories of Nevada, Ohio and Texas.

The trio classifies themselves as “assertive folk,” and after viewing their homepage on canyonsmusic.com, the three stand strong and look assertive as hell. After listening to their music, it is apparent that their strength goes beyond appearance and lives within their voices, their fast-playing fingers and refined lyrics. Sometimes Late at Night is a short, four-track album featuring three new songs that get straight to the point. The EP opens and closes with grooving folk frenzies, beginning with “Once,” which sets the bar for the EP. This track balances folk and rock, giving it an alluring edge with vocals but lets the freak-folk elements surface with fast and catchy trade-offs between electric twang and acoustic chords. The EP ends with “Ohio,” demonstrating their ability to take a song and tell a story that doesn’t alienate the listener but, rather, creates a creative space to evoke parallel memories from the listener: “I would play the piano for hours / I would take the longer way for the flowers / I would climb that old tree / Pretending it was home.”

Canyons will be buzzing around all summer playing sets at Earth Jam, the Utah Arts Festival, the Homestead Concert Series, Women’s Red Rock Festival and even tiptoeing into Reno, Nevada, Anderson’s hometown, for the Reno Artown Festival. Make sure to catch one of the many rousing performances on the band’s tour schedule this year—you won’t regret it. –Lizz Corrigan