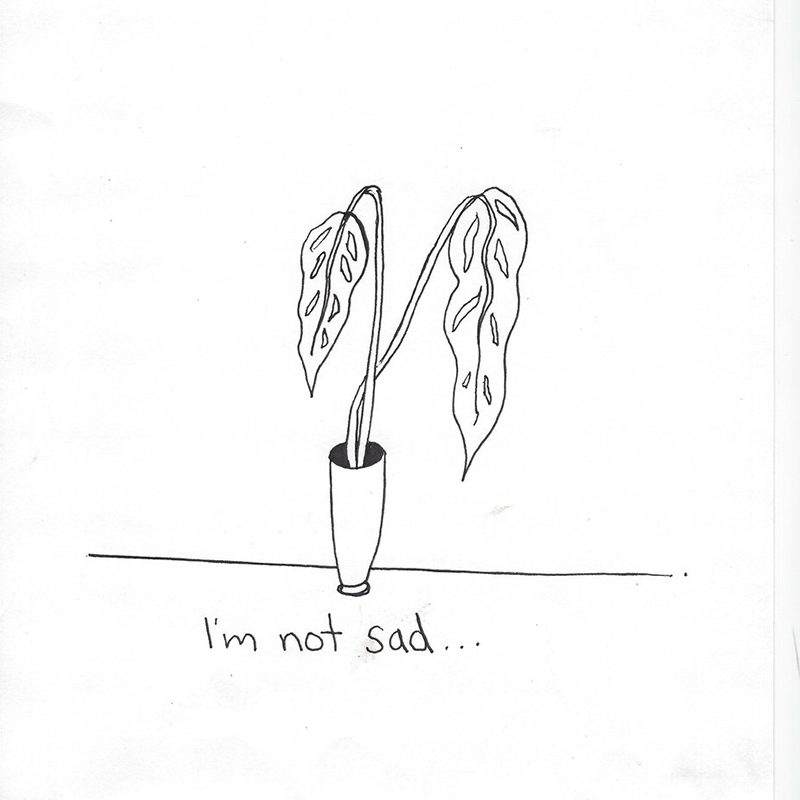 With a band name as long as theirs, Cat Ghost Formerly Known As Ghost Cat (CGFKAGC) should have a lot to offer in order to get audiences on board with them. Here’s the thing: They do not offer a lot, but what they have created with their new I’m not sad… EP is something that I found to be special. When I say they don’t have a lot to offer, I simply mean that their songs and their sound are pretty stripped-down. With only three members and all their instruments always running clean out of their amps, there are no bells and whistles to take attention away from the immediacy of the songs. The entirety of the work sounds like you’re listening to it live, and the rawness of the production is clearly intentional and contributes to how the songs are received.

The reason CGFKAGC can get away with discarding effects and recording tricks is because the writing is just that good. Ashleigh Bassett’s vocal melodies twist and turn over her intricate chord progressions while Austin Ryan-Mas’ bass refuses to be cornered into traditional bass-playing for too long. The bass lines are often playing off of the guitar parts in some voice exchanges and rarely play strictly root notes. On the intro for “I Only See One,” we can hear this interplay between guitar and bass. This song also showcases Bassett’s vocal abilities. The opening track, “Shut In,” begins with a fairly dark texture and continues to move to other darker sections. These sections are distinct from one another, but the way the band transitions in and out of them is what initially caught my interest. The other thing the group is gifted at doing is establishing dynamic contrast within their songs and using that as a way to push the songs forward. On “Eggshells,” we find one of the more extreme examples of them employing dynamic shifts as part of the structure of the song, with the band weaving in-and-out of whisper-soft textures to more bombastic tutti hits.

To wrap it up, this collection of songs is incredible and inspiring. Every person in SLC who cares about fostering local musicians should make sure they do their best to support this group, as they are one of our local gems. You can download I’m not sad… over at catghost.bandcamp.com. –Arcadio Rodriguez