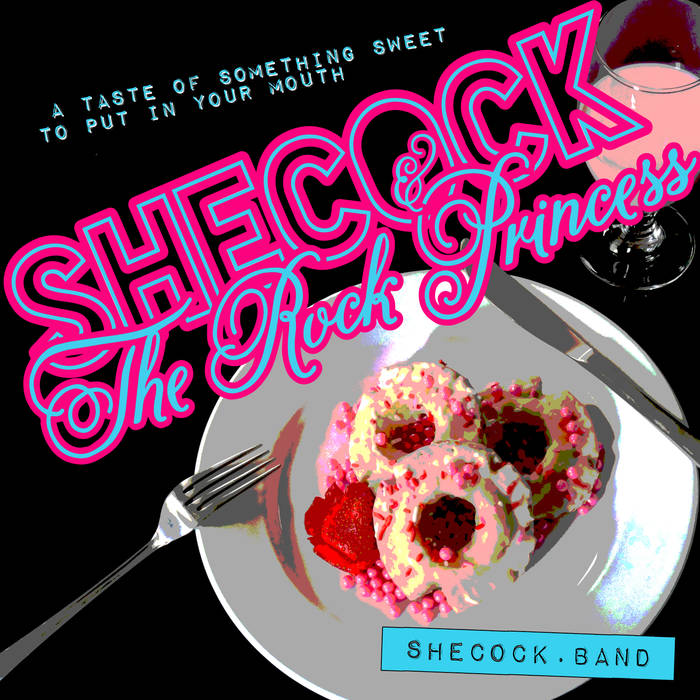 Local Music Review: Shecock and the Rock Princess – A Taste of Something Sweet to...

“Pink is punk as fuck / Just remember that / Pink is just as punk as you want” seems to encapsulate an attitude of basking in queer glory, merging the traditionally soft and feminine with the crassness of punk rock and flipping the bird to whomever can’t see past the gender binary. For songwriter, guitarist and lead singer Sofia Scott, aka The Rock Princess, “Pink is Punk” is the flagship song for Shecock and the Rock Princess. In a broad sense, the message of “Pink is Punk” is about defying any margins that society puts you into, though for Sofia, it definitely has to do with bucking gender roles and her personal experience as a trans woman. She sings, “We are the ones rattling the cage.” Having previously heard this particular song live, the mastering of the album certainly brings out nuances that are more difficult to hear live. Sofia’s guitar solo hearkens to the days of hair metal and the chord progressions don’t always go where your ear will think they’ll go, putting weight behind Shecock’s cheeky, in-your-face demeanor.

“Close, But No Cigar” follows this metal-inspired sound, with drummer Mat Benatar’s persistent use of cymbal and heavy-as-fuck drumming, serving as the backbone for bassist Low-End Lucy’s bombasic lines and Sofia’s growling voice. The message of “Close, But No Cigar” has more to do with an artistic endeavor, creating the feeling that perfection will always be just out of reach. While this song is the most face-melting, Shecock don’t shy away from more synth sounds—“The Grey,” a song that seems like it is slowly building, leads into the bonus track, “All Colors Fade,” an abstract song that slowly deconstructs “Grey” with warbly sound effect. Overall, Shecock and the Rock Princess have a good foundation built with the Taste EP. Sofia’s lyrics are both universally appealing and deeply personal to her own story, and the band pulls only the best elements of punk and metal with a drag aesthetic. –Ali Shimkus