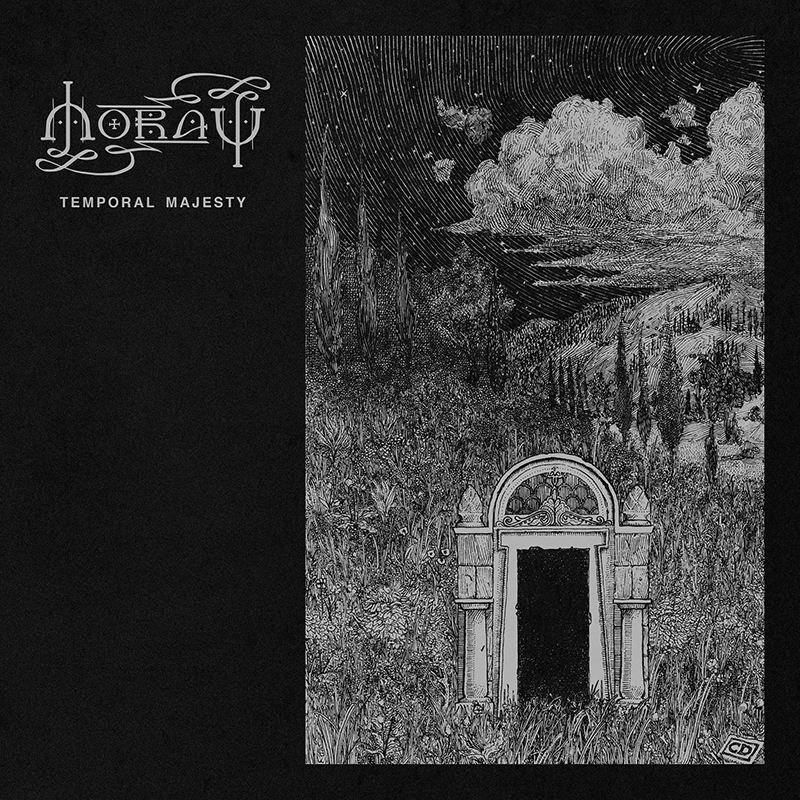 A somewhat black metal release from Provo, Utah – it’s almost an oxymoron. The duo that is Moray have come up with their interesting EP, Temporal Majesty. It’s sort of post–black metal that has some kinda-sorta ’core elements—all the stuff that pisses off black metal purists. Admittedly, I am one of those purists. Even with that bias in mind, the five tracks here do their best to hack away at my purist view and reevaluate the whole “post-black metal is hated among purists” notion. Moray’s strongest attribute here is the use of melody in its scratchy, tremolo, black metal–riff style as well as their thrashy sound. “Aether” has a hefty amount of that thrash sound. It’s interesting to listen to. It sounds sort of “core” (in between metalcore and hardcore), even though it’s not exactly that—it’s a weird middle ground. Moray do much better with that more thrash-rhythm and melody-oriented sound than they do with the tremolo–black metal style. Still talking about “Aether,” its underlying bass-guitar work further propels the song into highly memorable territory. It reminds me of some of Agalloch’s work, minus the folk influence. All of the songs—aside from the sort of atmospheric outro track, “Telestial World”—toe that line from melodic/rhythm–driven songs to throwing in the tremolo–black metal–riff style. The fact that my very heavy bias about anything close to resembling “post–black metal” went out the door is a heavy statement for what Moray offer with Temporal Majesty. It doesn’t feel derivative to the bands that are becoming a dime a dozen these days—It has its own sound and creative feeling. My biggest complaint here is the vocal snarling sounds a tad forced. When all is said and done, this is an EP that should delight fans of post-black metal or bands carefully riding that razor’s edge of pure and post-black metal. There should be interesting things to come for the band, and even this biased critic will be interested to hear it. –Bryer Wharton