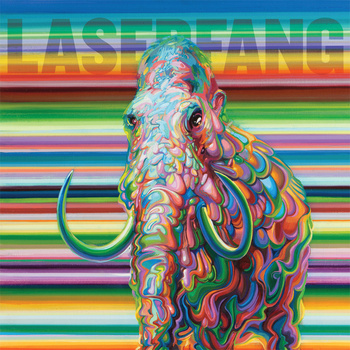 Laserfang
Mammoth
Kilby Records
Street: 12.04
Laserfang = Vile Blue Shades + Mammoth + Night Sweats
Laserfang opens their album the way that most bands would close a set after a multi-song encore. The first track on the album, “Master Control Program” starts with a minute-long musical instrument orgy before diving into a funky, electro-infused dance party. Shane Asbridge’s vocals don’t roll in until almost the third minute of the song, but when they finally do make their appearance, they only amplify the epic, apocalypse-style dance rock. Laserfang is well known for their energetic live performances and Mammoth captures their bouncy and sometimes out-of-this-world stage presence. At times, the album sounds more polished than the band does live, but that may be more related to the lack of whiskey that I’ve consumed while listening than the actual recording. My favorite tracks are “Captain Ivan Drago,” “Alan Stanwyk” and “Baron Vladimir Harkonnen.”  If you’ve somehow managed to miss the musical phenomenon that is Laserfang, be sure to check them out and buy their album. Even if you decide you hate the music (i.e. you have bad taste) the multi-colored melting mammoth cover art created by Sri Whipple is worth the price alone.