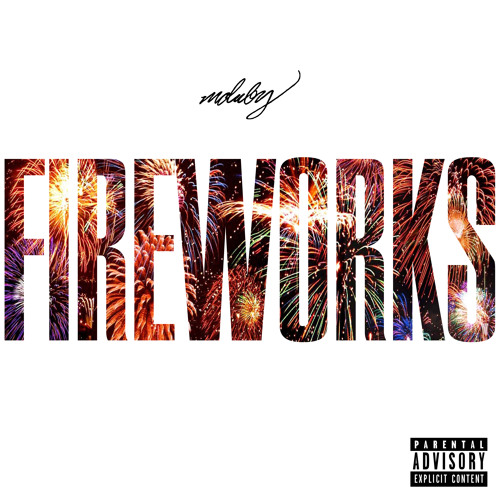 As stated on his Facebook page, Reno, Las Vegas rapper m.duby’s release of Fireworks is his most successful to date and for good reason. The album features an extremely creative mix of diverse backbeats and thought-provoking lyrics. Fireworks uses samples from EDM, 8-Bit and classic hip-hop in amazing fashion. The track “loVE GAmeS” samples Calvin Harris’ “I Need Your Love” in a way I haven’t heard before in hip-hop, isolating Ellie Goulding’s lyrics and pairing it with a spacey, synth-focused beat. Fireworks also keeps relaxed with its track “Hermosa,” featuring Alice Kristiansen, pairing her vocals with m.duby’s  rapping and backbeat. The sound comes together in a relaxed island styling that is reminiscent of Childish Gambino’s STN MTN/Kauai. The highlight of this album is the track “Lights on,” which   starts with a vaporwave-esque editing of the looped chorus of Sam Smith’s “Life Support.” The track then goes on to tell of m.duby’s journey through life and music. The track has a soothing and simple backbeat, all while telling a compelling story.

This album truly stands out in its ability to sample current artists in a way that may be unconventional, reminiscent of Wiz Khalifa’s “We’re Done” or Mac Miller’s “The Spins” and each artist’s use of pop music to make soothing yet hypnotizing backbeats. Fireworks is unique in that, while it uses a plethora of different styles, it remains consistent in its sound and styling. M.duby‘s confidence in his lyrics creates an unrivaled flow throughout the album. Tracks like “RAPSOVERBEATS” flow perfectly over an 8-bit-inspired beat with hints of trap bass and high hats. The title tack features a Latin American-inspired interlude in its final minute, showing some of the diverse inspirations taken by m.duby.

On top of the creative beats and lyrics featured throughout this album, Fireworks is impressive in that it was recorded and edited on m.duby’s iPad while he was in a third-world country. From what I’ve heard out of the Las Vegas scene, this is one of the best-put together albums to come out, and much like the Salk Lake City scene, it is amazing to see such talent coming out of the desert. Fireworks is put together in a way that would rival an album made with professional production and equipment. The amount of work and effort put into this album is not only impressive, but it also shows its flawless sound and all-over flow. This album is truly a testiment that you can create a work of art even if you have very little to work with, as long as you can think creatively and put in the work. I would recommend Fireworks to those of you who are into soothing vocals paired with spacey, synth-heavy beats. I look forward to what the future has in store for m.duby. He made this album with limited resources and it truly showed off his talent as a rapper and producer, and I can’t wait to hear what he can produce with professional equipment. If you are into inventive production, chill beats and consistent flow, check out Fireworks Soundcloud.