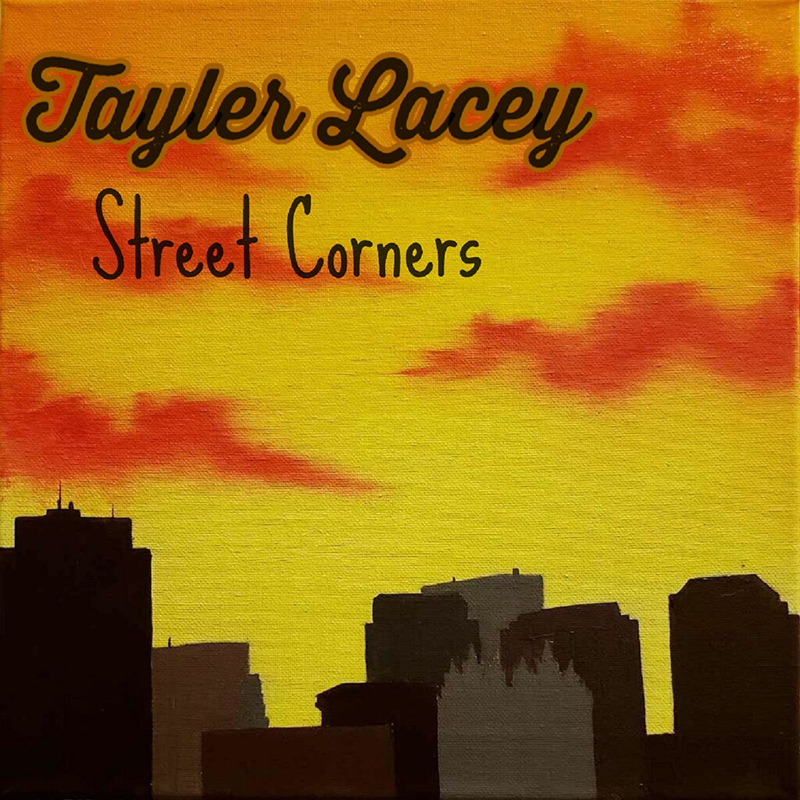 Taylor Lacey is one with his guitar. Lacey finger picks, steadily strums and, at times, hand-claps and lap-pats his way through six tracks on his new EP, Street Corners. Lacey sings about the frustrations of the modern man in the thick malaise of the modern world. He reduces it all down to being turned around and lost in his own god-damned town. Lacey sings of love, loss and insecurities and he snakes these themes through songs about dying sailors, corporate drones and Richard Milhous Nixon.

Lacey sings early on this record that we live in troubled times. However, he doesn’t try to save the world with his songs, which I appreciate him for. His troubled times are filtered down and local, stretching across the street or just down the road. On the track “The Death Of The Modern Sailor,” Lacey sings, “His boat was anchored there for six weeks now / I wish I learned to sail but I don’t know how, I don’t know how / True sailing is dead—that’s what he said / His voice wrapped up in a grassy howl, this god-damned town.” Just like the sailor dead at sea, the corporate man is also dead on the same boat. “Said it once, said it a million / It ain’t Rome that you’ve been building / When have you seen your wife and children? / Do you even really want to see them?” Lacey sings on the track “The Whole Damn Town”: ”I tell you man I saw it in your eyes / You never did know how to prioritize / You got yourself a shell, but you’re Lord Of The Flies / I’m burning down the whole damn town to make you realize.” Regret is the sad end of ambition.

For the most part, Street Corners is a record about places you fix yourself. You fix the environment, you fix the world. The six tracks on Street Corners erupts with a controlled acoustic aggression that supports a voice and a songwriter, finding himself. I enjoyed Lacey’s stories and how he leans back to simpler times. “I long for the days where people ran free like sprinklers on your lawn,” Lacey sings on the final track, “The Watergate Scandal.” “And it wasn’t as hard to believe only the things that you saw.” I enjoyed Street Corners. Give it a listen on taylerlacey.bandcamp.com. –Russ Holsten