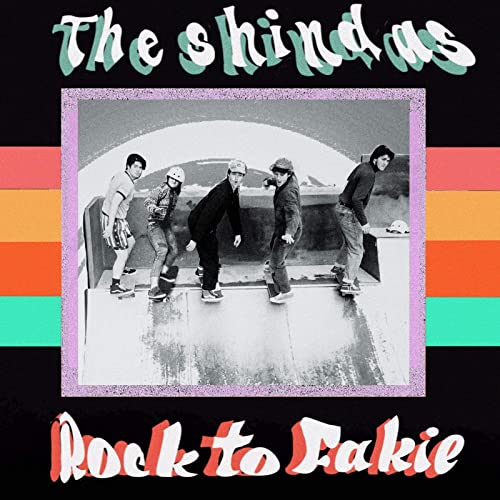 The Shindas | Rock to Fakie | Self-Released

The Shindas
Rock to Fakie

A month into the quarantine spring, Provo-based band The Shindas debuted their album Rock to Fakie, sounding like a product of a Malibu beach party being crashed by a Bones Brigade skate video. These seven carnivalesque, fuzz-laden tracks provide alternate anthems adjacent to the already beloved surf-rock mainstream, adding more space of appreciation to eclipsed subjects.

The record starts off with “Shinda Shimmy,” an under-two-minute skate-punk jingle that mashes grimy distortion with the attitude of the SoCal music culture. The upbeat melody encourages your shoulders to follow along, or, even go for the classic monkey-arm movement. Energy is kept high as the album melts into “Thrash or Crash” with a swinging drumbeat and a hazy doowop feel. The sound embodies the evolved culture of skateboarding, ranging from the Sidewalk Surfin’ days to the angst-y aesthetic it is more known for today.

The ode, “Roller Girl,” is the sonic praise all roller-skating girls have been waiting for. Pulling from The Beach Boys’ “Surfer Girl” sound, simple instrumentation casually builds up throughout the song, eventually doubling the pace into a folk-punk beat as a classic rock ’n roll guitar solo swims over the closing mayhem. Being the longest song on the album and most repetitive, it will surely be stuck in your head for the rest of the day (as a hobby roller-skater myself, this is not a bad thing).

Their first single released in 2019, “Mac n’ Cheese Daze,” is a brazen garage-punk anthem for the favorite meal of children and stoners alike. The chorus chants push the excitement for a day dedicated to such a cherished cuisine. It almost comes off as a fun/spoof mix until the bridge opens to harmonious vocals that give this ditty the extra pop to hook you a little longer.

A solitary and groovy blues guitar riff initiates “Heeby Jeebies,” followed by a funky drum beat that pushes the verses to an explosive, junkshop-glam chorus. The ’70s-toned guitar solo takes over as a focal point as the song progresses. The ending melody is prolonged, creating a theatrical feel until everything eventually dismantles into a chaotic pounding of instruments. The Shindas end Rock to Fakie with a final nod to Monty Python, giving an everlasting creepy relatability to the current pandemic climate: “Bring out your dead!”

Roller-skating, shimmying and mac ‘n cheese: Rock to Fakie‘s addition of their own odes to surf-rock gives a light to that genre which is overshadowed by the already popularized. But this album also feels like a diary of The Shindas’ favorite things, and they are sharing it with us, hoping for indulgence in the good times they create. All I know is that I’m ready to get out of the house and skate to these tunes. –Kenz Waldon