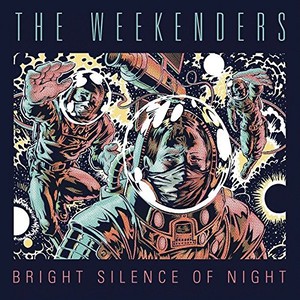 The Weekenders
Bright Silence of Night

On Bright Silence of Night, The Weekender’s follow up to 2012’s Don’t Plan On, the band has grown more into their own sound and has expanded it repertoire in terms of sonic exploration and dynamics. Without being too vague, I would dare say that they have ventured into a realm that is more cinematic and epic without missing the mark. The album sets its goals high, and at times, it seems like they’re attempting to hit Led Zeppelin standards when it comes to pure riffage, and singer Rob Reinfurt is capable of some amazing vocal stylings. His unique delivery and heartfelt lyrics conjure the bygone era of the frills and the belt craftsmanship that is missing from so much “rock” music being made today. Bright Silence of Night was produced by guitarist Mike Sasich at his Man vs. Music studio in Salt Lake City. The album is seamed together flawlessly and is a great listen at top volume or quiet, without losing range or dynamic in the songs. On this release, the band is firing on all cylinders. Tight drumming from Shaun Thomas and a beautiful groove from bassist Mike Torgerson leave a lot of room for dual guitar players Sasich and Reinfurt to be the driving force, while diving into an effects arsenal without getting boring or overplaying their hand.  If you’re looking for bluesy-grooving, school-of-Zeppelin licks, this will be your album. There is rarely a short-and-sweet number on this one, but I’ll tell you what, it’s one hell of an enjoyable ride! –Jeremy Cardenas