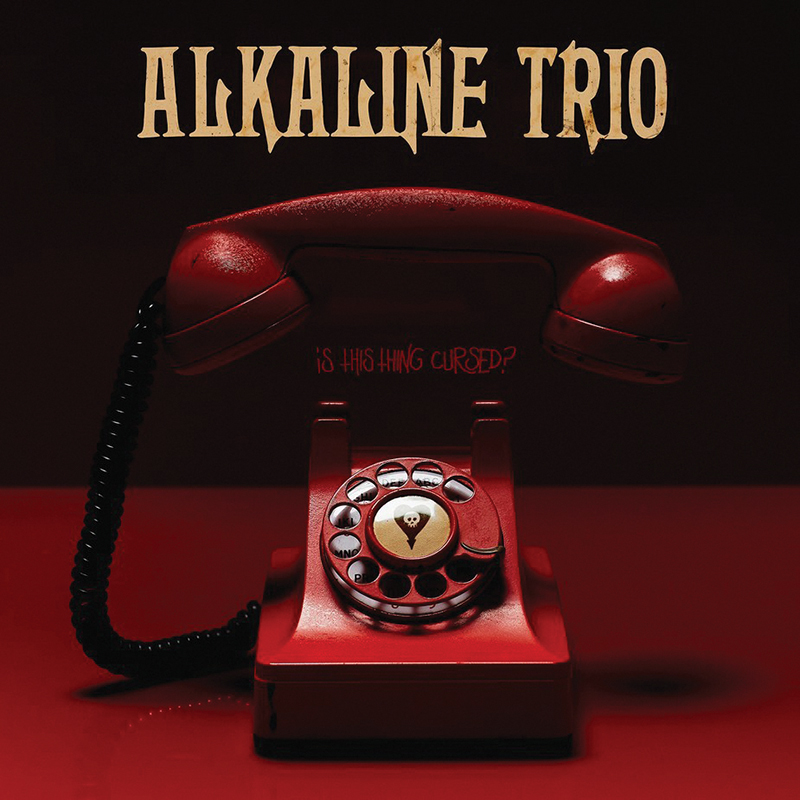 Alkaline Trio Is This Thing Cursed?

It feels as if Alkaline Trio are sending longtime fans reminders of why they love them. The first track, “Is This Thing Cursed?” starts off sweet and welcoming, then progresses into everything you’d expect from an innovative, modern-day punk band: punk-beats in a 1980s vein, crashing symbols with interesting, hypnotic riffs, a sturdy bassline and, of course, Matt Skiba’s dark vocals.

“Little Help” is probably the most fun and humorous track on the album. It’s the one song that isn’t super poetic or very emotional, but it’s high energy, entertaining and the embodiment of a punk boy matured. Hell, it’s even admitted in the lyrics: “Can anybody here buy this old fool a drink?” and, “Can anybody here give this old fool a lift?” While it may be a funny, filler piece for Is This Thing Cursed?, the boyish charm embedded into this track gives it that lovable trait.

While there may be some points that lose my attention—specifically: “Sweet Vampires,” “Pale Blue Ribbon” and “Heart Attacks”—there are a ton of other songs that stand out from the rest. “Goodbye Fire Island,” is filled to the brim with poetic lyrics, scenic descriptions and reminds me a lot of The Lawrence Arms in their Cocktails and Dreams era. It’s easy to listen to, beautiful and offers enough room for the lyrics to shine through the instrumentals.

“Demon and Division” is easily one of my favorite tracks on the album— it’s punky, it’s sweet and it doesn’t hold back emotionally. Within the first few seconds of the song, the wistful guitar lick in the chorus sweeps me away. Not to mention that Skiba’s voice blends perfectly into the noodling melodies, and it’s enough to melt my heart. This song has easily earned a spot in the “Play 20 More Times Club.”

They chose a perfect song to close out the album: “Kristilline.” It’s one of my favorites of the bunch because the toned-down acoustic guitar and vocals that open the track contrast rampantness of the rest of the album. It’s more relaxed sonically, but while it may be dressed-down, the passion continues to swell up to the chorus when Skiba shouts, “I want you, Kristilline.” His voice expresses desperation and longing—a perfect pairing to the airiness of this track. It’s a straightforward song that isn’t complex as far as construction goes, but it’s simple enough to sing along to, and the emotional heaviness of the track lingers long after the lyrics finish, into the outro.

On their ninth studio LP, it’s evident that Alkaline Trio have matured along with their fanbase. Compared to their first release in 1999, Goddamnit, you can hear that their foundation is fixed in the fundamentals of ’90s punk—they’re just as edgy as the early days, but with a little more refinement. While overall, the tone of this collection doesn’t scream ’90s-punk revival and leans more toward alternative-radio punk—there’s a lingering presence of the Goddamnit days on Is This Thing Cursed? This progression reminds me a lot of what Blink-182 did, dare I say it. The only difference is that I think Alkaline Trio, while polished up, still haven’t (completely) uprooted their foundations in punk. They recognize their origins, and instead of rebranding themselves for a new audience, they grow alongside the one they already have. While there’s a bit more radio-friendliness throughout this album, there’s no denying that it’s still jammable. Even at their most mainstream moments on this album—such as “I Can’t Believe,” and the title track—Alkaline Trio still put their original, untampered-with signature on them. –Zaina Abujebarah