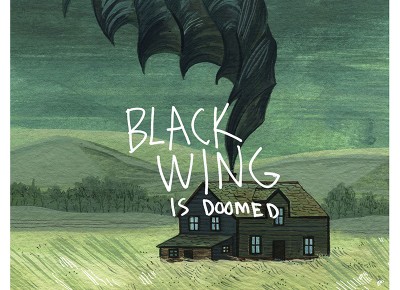 …Is Doomed begins with an analog arpeggio and a tip of the hat toward the cavernous hollow and wash that is witch house, only to be kindly betrayed by wave of warm synths that rises from the depths in order to distance Black Wing from the kitsch occult leanings that suffocate less imaginative artists. “Luther” and “Black Wing” are bathed in reverb and the vocals drown in the mix, but beneath the thundering drums is a brightness in the melody that suggests that Black Wing could have been a straightforward electronic act if they weren’t drawn to the use of hypnotic drones and swirling electronics. “My Body Betrayed Me,” an ode to numbness, even features enough of a hook to entice the most jaded of listener to sing along with the “If I feel something, my body betrayed me” refrain. Then “Unemployed,” a psychedelic stomper smothered in distorted electronics over a whirling combination of drums and feedback, arrives to close out an emotionally exhausting song cycle.

It’s never as edgy as Suicide or as raw as Throbbing Gristle—Black Wing stick to a more traditional formula—but there are touches here and there that clearly owe a certain debt to the sound manipulation that was born from early electronic experimentation when keyboards were more punk than guitars.

The flip side of the album (if there were such a thing in the digital world) begins with “DSA,” a danceable instrumental with oversaturated drums that crackle with every snare hit. It’s a change of course that pushes the sound closer to the future retroism of synthpop revisionists Electric Youth and College, who operate in an alternate timeline where the 1990s never happened. This sound solidifies in the haunting blip and pulse of “Death Sentences” and then gives way to the utterly beautiful closer, “If I Let Him In.” This final song successfully marries the rumbling grind of the first four songs with the sort of soaring atmospherics that feel like they were lifted from a soundtrack to an science fiction film in the vein of Solaris or 2001: A Space Odyssey that was too emotionally ambitious in scope to ever be made.

What I enjoy the most about …Is Doomed is the rough edges. It feels wonderfully under-produced, much in the same way that Clan of Xymox’s self-titled album was. There is a sense that the sounds, rather than the musician, are dictating the direction of the songs and that at any given moment, it could all rattle apart. We’ve come to a point technologically, particularly in electronic music, where it is seemingly easier to produce something that sounds polished than it is to create a sonic experience that has any sort of bite to it. …Is Doomed is the sort of album that begs to be played at full volume at midnight when the exhilaration of being alive collides with the bitter reality of the mundane existence that awaits come morning. It’s euphoria and the comedown all in one.