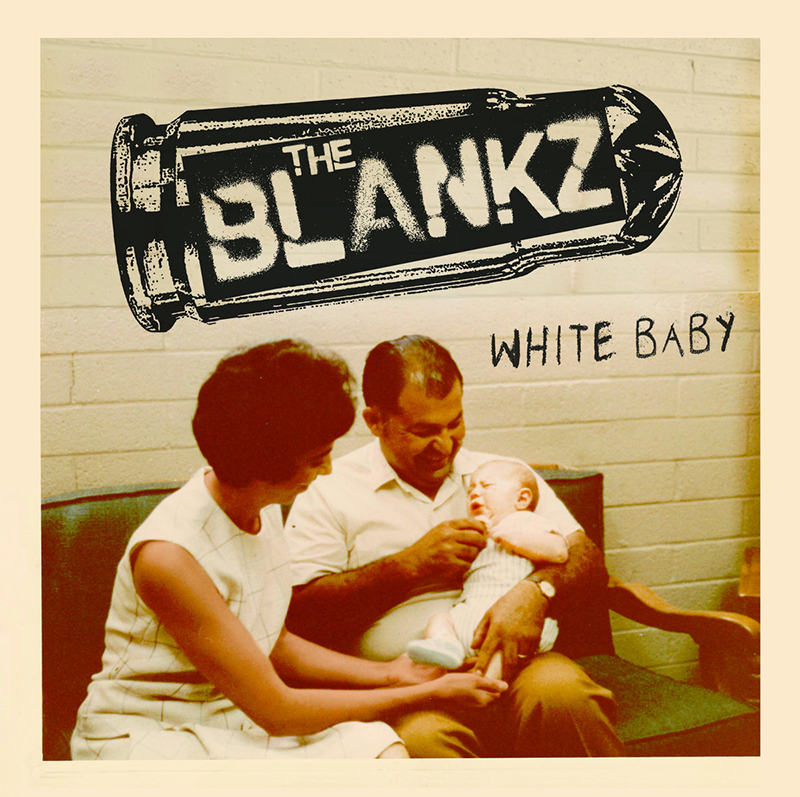 Born in 2017, The Blankz are a vibrant electrical current of pogo-inducing madness. Together, they are Tommy Blank (vox), Jaime Blank (guitar), Andy Blank (bass), Johnny Blank (drums) and Nikkie Blank (synthesizer), who also fronts The Darts. They are from Phoenix, Arizona, and like their state, they are hot but not bothered. Their debut record, the White Baby/Sissy Glue record, is a lethal combination of orgasmic weirdo pop infused with the sensibilities of raucous punk rock.

The A-side’s “White Baby” is an eerily catchy tune. It’s about Tommy Blank, who is white and was adopted and raised by Mexican parents in 1969. The track immediately grabs ahold of those who dare to listen. This is largely thanks to the rapidfire drumbeats and wailing synth. Tommy Blank delivers stunning, angsty vocals that serenade the notion of growing up and navigating between cultures and upbringings in adolescence. In other words, it’s song about being confused, exploring who someone is and where they come from.

“White Baby” is a solid A-side and is infectiously punchy. If one needed a song for getting ready in the morning, this might be it. Played loud enough, it should inspire jerking about thanks to the synth and pounding drums. Warning: Playing this at a head-splitting level may inspire the ability to make friends or possibly enemies with one’s neighbors. So, give it a go.

The B-side’s “Sissy Glue” is a whirling frantic explosion. This track captures the energy of The Briefs with the high-voltage ferocity of The Epoxies. It’s played as if speed and amphetamines made up the diet powering this track. “Sissy Glue” is a take-no-prisoners, snotty-like attitude and is defined by the alien-spaceship-sounding synth courtesy of Nikki Blank.  Playing this will shock and awe those brave enough to listen into a catatonic state.

Fans of the ’77-era sound of punk rock will find endless delight in The Blankz. Not for the easily offended or sensitive, The Blankz hearken on a sound that is borderline nostalgic, but still relevant. They boast the kind of wild and charismatic style that made The Briefs and their cohorts the best thing to happen to punk in the noughties. With the The Blankz’s recording, there is no overbearing, studded growling that beats listeners over the head with violent outbursts of aggression. Rather, with these cats, it’s all about igniting fun that invokes the “pogo you motherfuckers” mantra.

This record is certainly worth adding to the music collection of any lover of fun and furious punk rock. Get it and check out The Blankz live. If they can play with the same energy that is pushed through their record, then driving to Phoenix to catch them will be worth the trip.

The Blankz’ White Baby/Sissy Glue 7” drops on July 13, so treat yourself and order it. It’ll be the wisest music buy one can make this year—after picking up The Briefs’ Hit after Hit. Then, by all means, inspire your neighbors or parents with the sounds of a brilliant single. –Nick Kuzmack