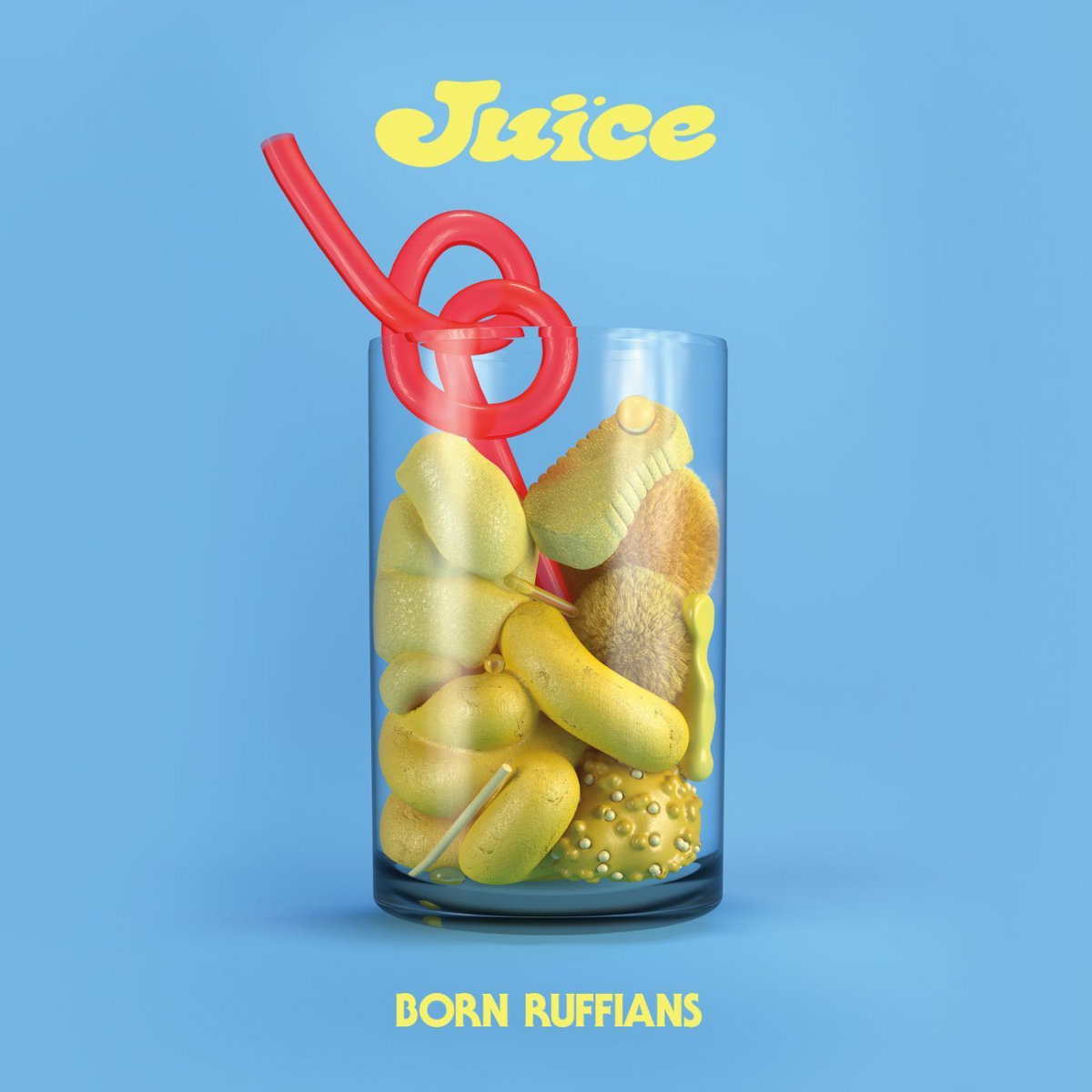 As someone who jumped on the Born Ruffians bandwagon early in the band’s discography, I could not be happier to discover nine new and craveable tracks on their latest offering, JUICE. Balanced somewhere between quirky indie rock and hazy beach pop, this Toronto-based trio continues to accurately provide—and I don’t necessarily mean this as a bad thing—exactly what I’ve come to expect. Guitarist/vocalist Luke Lalonde, bassist Mitch DeRosier and drummer Steve Hamelin are 15 years into their career, and they have once again created a record that is perfectly and unapologetically Born Ruffians.

JUICE kicks off with the punchy track “I Fall In Love Every Night.” Metallic horns and Lalonde’s nasal yell-sing add urgency to earnest lyrics about how much there is to admire and appreciate in the world. What I’ve loved most about Born Ruffians throughout their discography are the nuances that set them apart in the crowded realm of indie rock: weirdness in the form of abrupt time signature changes and loud, unanticipated instruments. I tune in hoping for something unexpected, something groovy and something a little rowdy (or, you know, ruffian). I know the album is going to be exactly what I want to hear when, on the opening track, rolling drums and irreverent guitar progressions suddenly slow into a jazzy bridge before picking right back up again. The outro of every song shifts to match the energy of the upcoming track, resulting in a smooth, cohesive listening experience.

The album rolls on, a continuous surprise party that never wades too far into the territory of acquired taste. Crisp whistles, clicks and other various sound bites echo throughout “Dedication” while Lalonde yell-sings about global destruction via fame, greed and God. The lyrics, “Five ways to get out of bed / Seven ways to get stuck in your head … It’s all in the name of dedication” allude to clickbait and consumerism amid high-energy guitar riffs and drums.

There’s a break from the album’s unruliness on “The Poet (Can’t Jam).” With an intro featuring a single strummed chord and cloyingly rhymed lyrics throughout, the track lends more sweetness than the other songs on JUICE. A rollicking keyboard line carries the momentum while Lalonde rattles off all the things he’s bad at. Though the track is a bit twee for my taste, it’s funny and clever. “Hey You” with Maddy Wilde evokes Mazzy Star and some vintage psych-pop vibes. This love song, coupled with “The Poet (Can’t Jam),” softens Born Ruffians’ aloofness a bit.

The atmospheric instrumental track “Hazy Wave” prefaces the album’s outro, “Wavy Haze.” An homage to the band’s early days in Toronto, the song sounds a lot like Born Ruffians’ older, most popular songs, with a melodic momentum inarguably similar to “Needle” (Birthmarks, 2013). Likely because of this familiarity, it’s one of my favorite tracks on the album.

I sometimes wonder whether bands think of it as a compliment or an annoyance to be easily likened to other artists. While listening to JUICE, I had several déjà vu moments during which I asked myself, “This sounds familiar, what band does this sound like?” only to realize I was thinking of another Born Ruffians track circa 2010. When a band has been writing music that mirrors their own unique sound for 15 years, I guess that’s what happens—for better or for worse. –Mekenna Malan