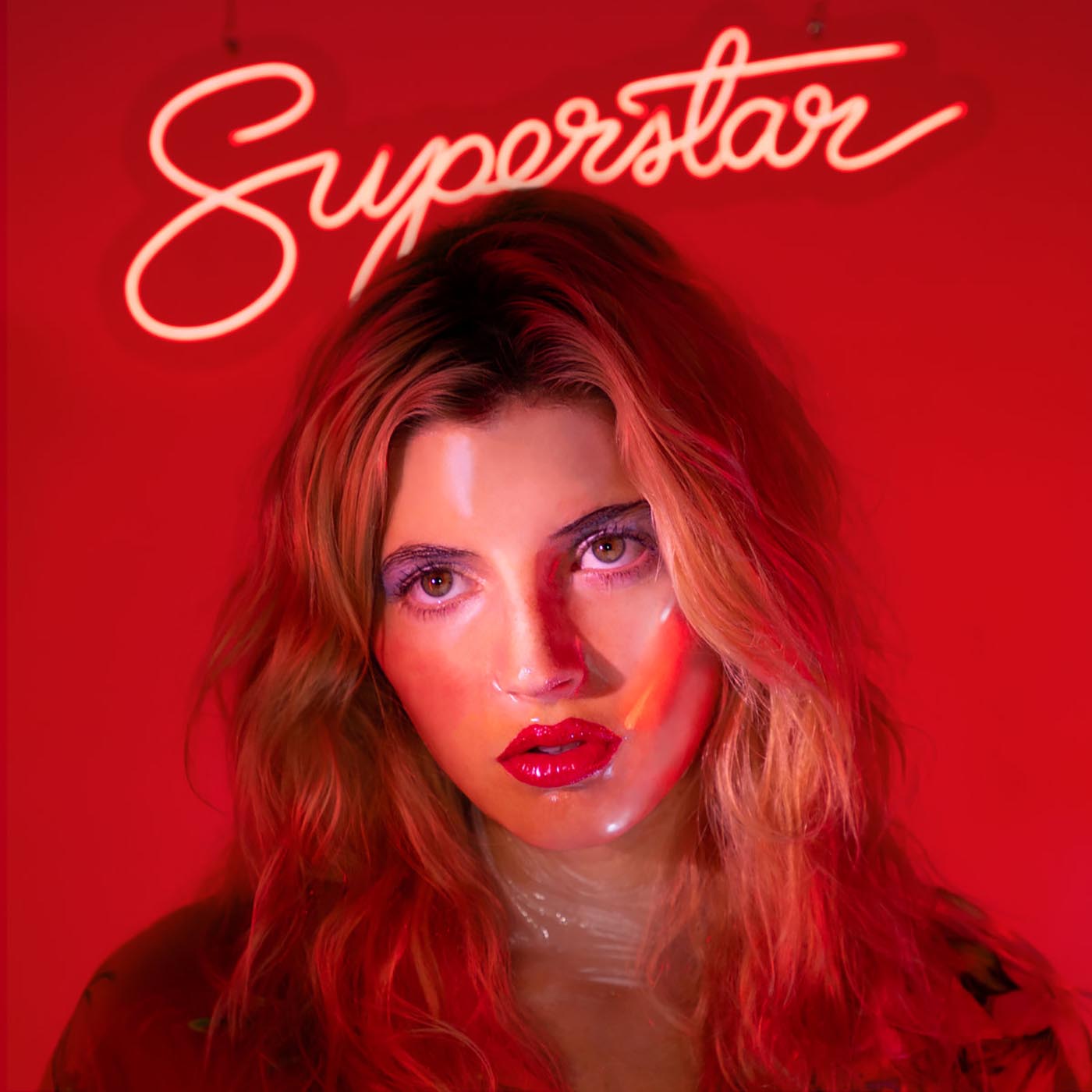 The release of Caroline Rose’s sophomore album, Superstar, is an underdog story closely related to Rose’s real life. Described as a “glitter-filled cinematic pop record for weirdos,” this album follows Rose’s alter-ego in a classic Hollywood tale of their satirized rise to fame. Superstar chronologically tells the story of an antagonist’s pursuit of stardom mixed with the moral breakdowns that happen along the way—making an amplified character the audience loves and wants to see succeed, even if Rose isn’t asking for anyone’s support to go for what they want. As the semi-sequel to Rose’s acclaimed 2018 debut album, Loner, this record shows the aftereffects of what a taste of success can do to an artist. Now, let’s pull back the curtain on the enigma that is Caroline Rose and experience the loner evolve into the superstar.

The first track, “Nothing’s Impossible,” speaks to the spark of the stardom journey when Rose gets a misinterpreted phone call from the Chateau Marmont. Expanding from a keyboard-and-vocals production to a head-bopping beat brings the pop energy to the forefront. Key changes stretch the theatric drama further and build the tension to the countless ideas that are running through Rose’s head of what possibilities can be achieved with an opportunity like this. As the song hits its sonic peak, the instruments drain away, painting the picture in my head of an old film reel burning out into nothingness. Rising from these audible ashes is the smoothest of elevator music, creating an anti-climactic and calming resolution that foreshadows how the story of Rose’s alter-ego will play out in the end.

The indie-psych single “Feel the Way I Want To” was released in February with a humorous music video following in a similar vein to what Rose sings about in “Nothing’s Impossible.” Rose gets the call of a lifetime from what they think is Hollywood, CA only to realize they must travel cross-country to act on this impassable opportunity. Filmed during a road trip through random places across the country, Rose grooves all the way from Los Angeles to Florida to this Prince-esque song, making me immediately want to watch the iconic “Raspberry Beret” music video right after.

Familiar sonic traits from Loner are found on “Got to Go My Own Way,” playing into a similar substance of bubbly choruses mixed with prominent keyboard, synth and bass. However, the lyrics are more of a resistance to the norm of how Rose has been living. They describe the tunnel vision Rose experiences as they sing, “Jumping off the deep end / I was born to be a star,” setting up the idea that they are willing to do anything to get to the top.

The opening keyboard melody to “Do You Think We’ll Last Forever?” cues an old Hollywood feel in me—as if I’m experiencing the movie moment when two characters’ eyes meet and can’t look away. Unexpectedly, the song’s mood changes to something more suitable for fans of the Bee Gees who love to walk to a thump. The marching beats created by a disco-driven bassline, paired with Rose’s vocal melody, matches in unison with a theremin-sounding effect, eventually ending in an explosive declaration of love. This theme is continued on “Freak Like Me,” driving the puppy love quality with flutes, echoey piano and subtle drum effects, making it the sultriest song on the album. “My love is a bad idea,” Rose sings as they list off similar flaws they and their love interest both identify with, seemingly okay with this observation.

The album starts to turn into an outcome Rose’s character didn’t expect with “Someone New.” Here, the new wave–inspired verses flow into a dreamy pop chorus. Lyrically, Rose’s dreams shed into a nightmare when their love leaves them for someone new, but the new love interest looks exactly like Rose. Some analysis questions could be asked: Is this person truly a Rose lookalike? Or an image of who Rose was before the pursuit of stardom began? Or an image of someone who Rose is trying to be? Regardless of the inquiries, Rose’s conclusion is to become someone completely new and reinvent themself from any previous standards. However, there is still a heartbroken contemplation on “Pipe Dreams,” where Rose daydreams about running away with their love to get married and “build an adobe shack” atop a repetitive, 2-note guitar progression that continues throughout the entire song. For Rose, this is the ultimate goal, but as the song title suggests, these are all just pipe dreams.

The two intermissions that are spread out within the album, “Feelings Are A Thing Of The Past” and “Command Z,” act as a before-and-after breather for the album’s story. The wind instruments weaving in and out of ominous vocals for “Feelings Are a Thing of the Past” set the reality of the sacrifices that are necessary in order to achieve a certain level of success. “Command Z” climaxes this building tension with fuzz-laden synths, distorted vocals and lyrics that tell the traumatic story of a night Rose was pushed too far, wishing to take it all back.

On “Back at the Beginning,” Rose is optimistically reminiscent about a more innocent time in their life before the toll was taken on their journey to fame. Following “Command Z,” Rose contemplates the aftereffect of a star being pushed too far. “Don’t know which way is pain and reason,” Rose sings along to this bop with a suggestive early ’00s pop influence.

The foreshadowing on “Nothing’s Impossible” is resolved in the final track, “I Took a Ride.” With a new prioritized outlook on life, Rose’s attention is finally turned outward, realizing that love is what they wanted all along and they will stop at nothing to get it back. This song’s arpeggiated synth builds into an EDM beat and is something I could hear being a new score for another revamped cult film.

Roaring applause is more than appropriate as the curtains close on this epic musical odyssey. Rose’s alter ego’s status has evolved from loner to superstar through their own ambitious narrative. From D.I.Y studio skills and recording during free time while touring to a “make something from nothing” attitude, Superstar is an expansion of what Rose is capable of creating. In my eyes, everything Caroline Rose touches is gold, or in their own case, red. –Kenz Waldon