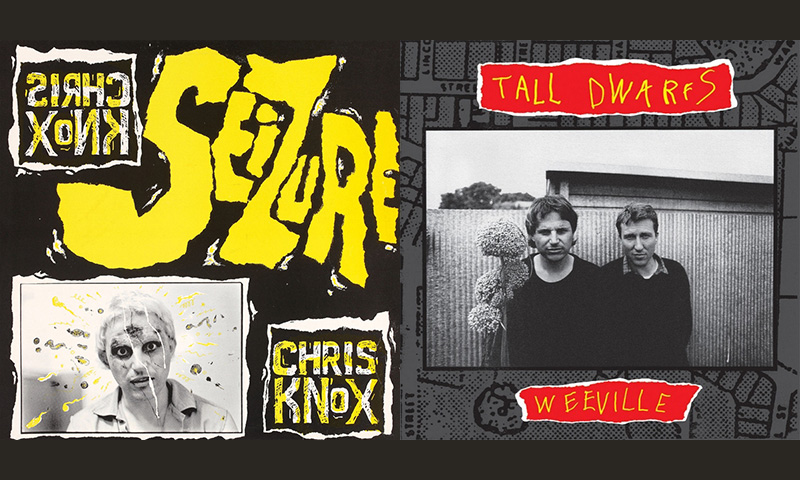 For every introverted soul who feared the sunlight, people and being seen or addressed in public, Chris Knox wrote songs for them. The famous godfather of New Zealand punk and lo-fi influenced all things that ultimately became the lame, overgeneralized indie label. No Chris Knox, no Pavement. No Chris Knox, no Yo La Tengo. No Chris Knox, no Neutral Milk Hotel. The music world became a better place when Knox sat down alone in his bedroom, inserted a high-bias cassette into his 4-track recorder, used his casiotone preset beats as his backing band and recorded his punk rock screeds. Pure poetry emanated from each song because of his dedication to melody and his blatant indifference to production quality.

Ultimately, songwriting set Knox apart from countless other New Zealand punks who called the Flying Nun label home. Seizure’s 4-track recordings play like a musical diary, something remarkably unique in any punk scene across the globe. Fans of Sebadoh’s landmark album III will notice the varying production quality from song to song. “My Dumb Luck” fades out abruptly, giving the listeners barely enough time to allow the song to stay for any length of time in their heads. “And I Will Cry” recalls Buddy Holly’s ballads—solo guitar with heartfelt harmonies lurking in the midst of the occasional mistakes. What is important to Knox and his followers is sincere intent.

Lyrically, each song bears the humor and self-loathing found in our favorite Pavement tracks. “Face of Fashion” mixes those dismissive slacker elements when Knox screams “My oh my/What a good boy am I/Got the hooks to catch you/Got the words to make you cry.” Knox wouldn’t dare utter those words to his crush in person. The harmonies reverberate within the four walls sequestering his innermost thoughts.

Knox’s prized penned lyrics are pasted together and mounted onto the sleeve. At the bottom of each lyric sheet are the chords and song structures. They serve as reminders to his fans how personable he is. Like his songs, he possesses no rock star ego. Despite Knox’s stroke in 2009, the effects of which limit his public appearances these days, his spirit is still felt throughout many of our record collections.

The final Tall Dwarfs album, Weeville, ended one era of music and began another. The band was Chris Knox and Alec Bathgate. Together, they did everything: cover art, liner notes, production and reproduction, songwriting, taking turns being lead vocals—everything. Bathgate bore that Alex Chilton swagger while Knox embraced his inner Chris Bell. The Lennon/McCartney trope doesn’t work with Bathgate and Knox. They shared tracks in the same way Barlow and Lowenstein did in Sebadoh. They both did what was needed for each other’s song, making them perfect at the time, but deeply flawed in their production. Like Knox’s Seizures, earnestness outweighed the glitz and glamour.

Tape loops and organ drones paint Rocky Erickson landscapes while harmonies fill in the foreground with vibrant reds and blues on tracks “Pirovette” and “Bodies.” Listening to sections of “Mr. Broccoli” recall Dinosaur Jr.’s sole Barlow-written track “Poledo.” “Rorschach,” on the other hand, contains pale tones. The song goes nowhere and everywhere in a little over three minutes. “Hallelujah Boy” is Tall Dwarfs best rendering of T-Rex, an influence so apparent that the song’s cadences sound reminiscent of when Marc Bolan was at his best.

The band’s end was anything but rock n’ roll. Pure anti-climax reared its ugly head. Creative differences, sure. Yet, they parted as friends, unaware of how they influenced, and continue to influence, lo-fi indie rock today.

The best part of this vinyl reissue comes in the form of a 20-page booklet of the band’s artwork from their three EPs and their first full-length album, Weeville. The visual charm of the booklet demonstrates how well two talented musicians can work well together when they put their egos aside.