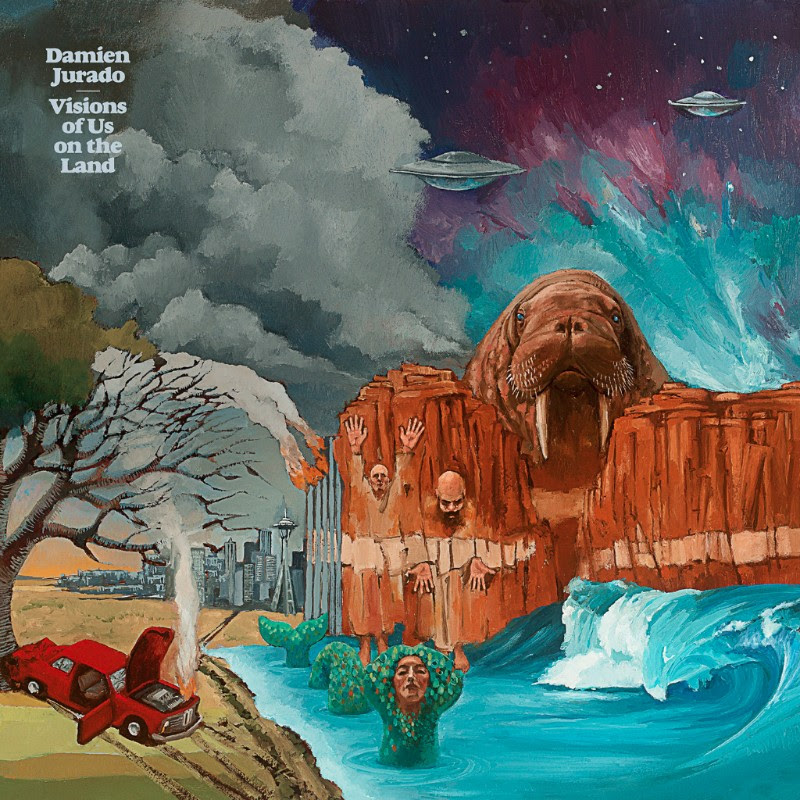 Review: Damien Jurado – Visions of Us on the Land

Damien Jurado
Visions of Us on the Land

Damien Jurado’s 12th studio album, Visions of Us on the Land, caps off a trilogy of Jurado’s releases from the last four years: the 2012 Maraqopa and his 2014 release, Brothers and Sisters of the Eternal Son. Visions of Us on the Land is the culmination of the journeys of the central (and nameless) trilogy protagonist, a character who seems simultaneously doomed by his introspection yet is adrift in a swirling, psychedelic paradise that marches fearlessly into untrodden indie-folk music territory.

The opening track, “November 20,” sets a precedent for a musical pilgrimage that’s tensely pregnant with apprehension and adventure. The song employs subtle, commanding piano and altruistic strings to foreshadow the following tracks. “Mellow Blue Polkadot” proceeds as a track rich with brisk drums that is abruptly interrupted by an unexpected, jolted time-signature change—but it works.

Perhaps the most notable track on the album, “QACHINA” employs a diverse instrumentation that draws immediate parallels to The Black Heart Procession’s 2002 release, Amore Del Tropico. Tense organ harmonies pan out over an equally eerie vocal landscape. Jurado croons, “I met myself there, saying go home,” as a kaleidoscope of multicolored guitar melodies wash through the song. It’s an adventurous departure from Jurado’s more straightforward, singer-songwriter style from the late ‘90s, and he pulls it off magnificently.

The fourth track on the album, “Lon Bella,” moves fully toward a direction that boasts flamboyant guitar distortions and irregular guitar tones, with Jurado almost threatening as he says, “You and I will make amends / With the daggers in our hands.” The following track, “Sam and Davy,” heeds a similar musical suite. It’s a pensive, full-sounding song with a deafeningly impressive array of instrumentation. Jurado continues his mystically morbid dialogue, anxiously inquiring of his audience, “Does your blood run cold? Or your eyes go wide?” It’s a fantastic take on the darker side of indie-folk songwriting. Instead of murder ballads, Jurado puts a shapeshifting protagonist at the center of his songwriting and successfully exploits all the sides of his human nature.

This brief exploration of darker territory gives way to lighter, more spiritual songs as the album moves into its sixth track, “Prisms.” Conjuring a likeness to Jurado’s 1999 album, Rehearsals for Departure, the song eases gently into the following lo-fi track, “ONALASKA.” “ONALASKA” deals out brazen guitar tones and phosphorescent sound effects that fully culminate with Jurado’s vocals to create perhaps the most atmospheric song on the album. The timbre of Jurado’s voice on this track quietly reflects a style similar to Mason Jennings—if Mason Jennings took a handful of psychedelics and hitchhiked to Barbados.

The album’s impressive 17-song track listing gradually draws to a close by wandering into mellower, more emotive songwriting. The song “And Loraine” lazily drifts in and out of different tempos and chord progressions while simultaneously diffusing nostalgic guitar rhythms into its mystique. It’s a fully emotive track that weaves peacefully through a recumbent lyrical narrative. The album closes with the bittersweet albeit exultant tune “Kola,” as Jurado sings poignantly, “I will remember you / The way you are right now.” It’s a fitting conclusion for his faceless hero’s journey: Jurado’s Visions of Us on the Land is a tragic, triumphant chronicle that pushes the boundaries of indie-folk music unlike any musician on the musical landscape right now. –Kristyn Porter