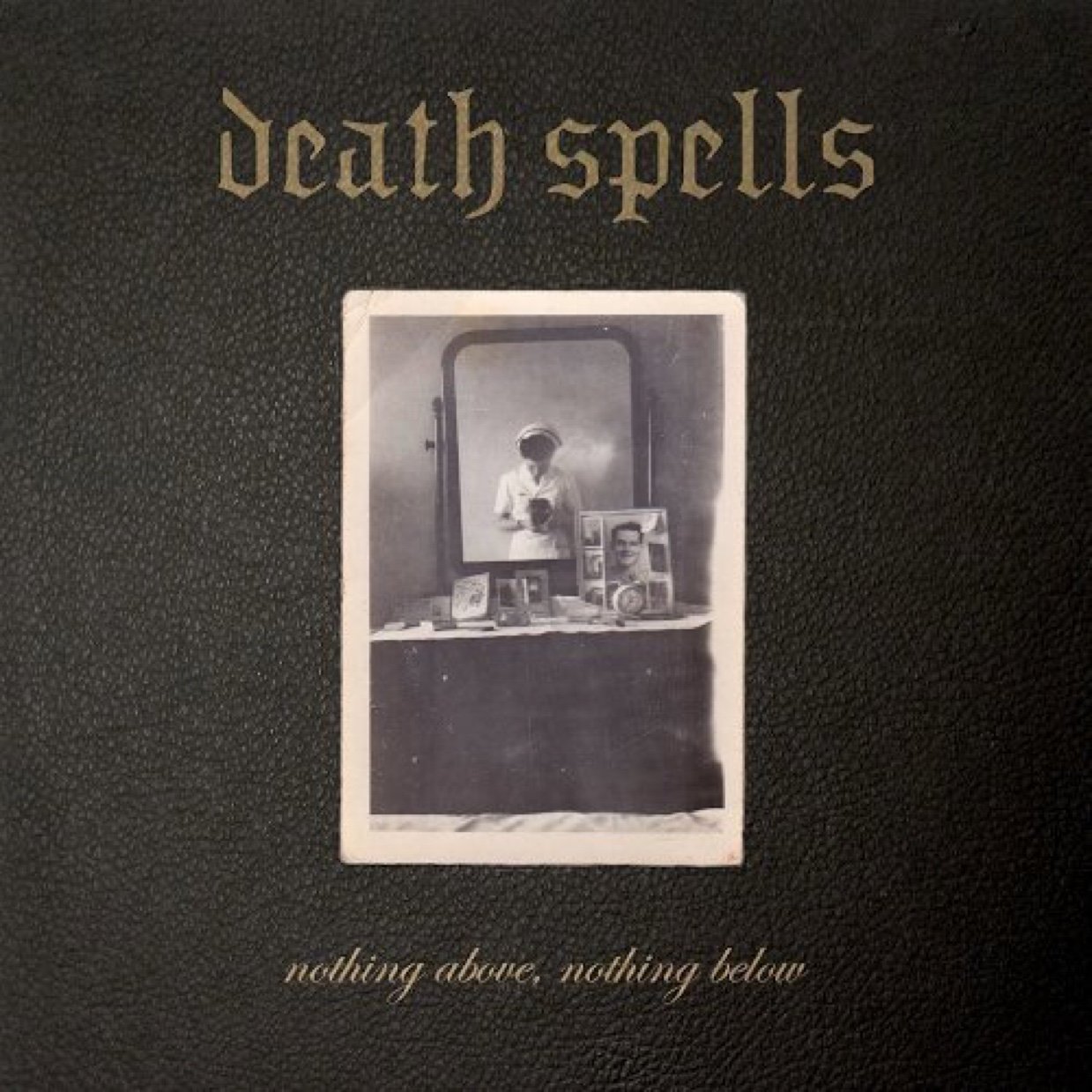 Review: Death Spells – Nothing Above, Nothing Below

Death Spells
Nothing Above, Nothing Below

Death Spells are kind of like a forgotten child—you know, the kid lives under the stairs, doesn’t say much and eats the table scraps, until, that is, a half-giant busts down the door and tells the child he’s a wizard. Harry Potter references aside, Death Spells have never really gotten the attention they deserved, until now. The brainchild of Frank Iero, My Chemical Romance rhythm guitarist, vocalist for the hardcore politically-minded Leathermouth and frontman of Frnk Iero and the Cellbration; and James Dewee, keyboard player for The Get Up Kids, drummer for Leathermouth and mastermind behind Reggie and the Full Effect, Death Spells saw their humble beginnings in 2012. While recording with My Chem, Iero and Dewee shared a room in LA, “borrowed” some equipment from the studio and began experimenting with emotionally and sonically aggressive noise music: Death Spells were born. But due to other obligations, the band went on the back burner. They briefly toured in 2013, released one EP, Choke On One Another / Sunday Came Undone (2013), and an untitled limited cassette (2013), then went underground. Nothing Above, Nothing Below brings Death Spells to the center of attention, and deservedly so.

The album cover depicts a black-and-white photograph set into a leather cover—both dark in color and mood. The titles of album and band are embossed in the leather with a dull gold, suggesting that even at its most decadent, Nothing Above, Nothing Below should not be confused for a statement of grandeur. The photograph depicts a woman wearing a WWII-era nurse uniform taking a picture of herself through a nightstand mirror. Though she is fairly plain, the table-toppings of her nightstand, including several pictures of a beaming young man—noticeably absent in the flesh—and a clock, seem to suggests notions of health and illness, absence and presence, the passing and lingering of time, and the bitter reminders of more joy-filled times. The cover, in near monochromatic colorings, is without joy, bringing to mind instead loss and uncertainty.

The album’s content stays well in line with the suggested meaning of the cover, but with a violence not visually depicted. The album opens with “Diluted Spoken,” a short, mostly calm introductory number. The song begins with a subtle, ambient ringing interrupted by an unsteady, gritty fuzz. Iero’s vocals, spoken through a distorted mic (for nearly the whole album), act as a spoken word iteration of what the cover has already suggested. “Hate Unconditional” features a steady and intriguing plucking of guitar strings and whispered, fuzzed-out vocals. The song eventually morphs into a manic demonstration—guttural distorted vocals, violent guitar strummings, and an industrial style percussion, reminiscent of recent Marilyn Manson tracks and equally at home on the John Wick soundtrack. “Where’s My Fucking Pills” is the first single by Death Spells, released back in 2013 and finally making its way here onto a solid, full-length. While the previous number owed its aggression to seemingly organic instruments, this song’s aggression relies solely on electric means and programming. “Piano Interlude” is, surprisingly, exactly that: a bare piano plays out bittersweet melodies while programming introduces some reversed synths. The second half of the album, including “Hell All American,” “Hypnotic Spells” and “Hit Like a Girl,” removes the manic aggression from the songs and focuses that aggression into pulsing dance beats, obviously at home at the nearest club’s goth or industrial night. The album concludes with “Loathe,” a song built around clapping percussion and groaning vocals, which both deteriorate until the sounds co-mingle and combine.

Nothing Above, Nothing Below is quite obviously a cathartic experience for Iero and Dewee, unleashing their demons on every violent turn. The album is fast-paced and attempts to outdo its own aggression and defy beauty as often as it attempts to cover uncharted sonic realms. Each song is a full-bodied, sensual experience, forcing upon the audience new and more destructive emotions. It may take some getting used to for fans of Iero and Dewee’s more subtle works, but Nothing Above, Nothing Below is nothing if not inventive, exciting and captivating. Long live Death Spells. –Z. Smith