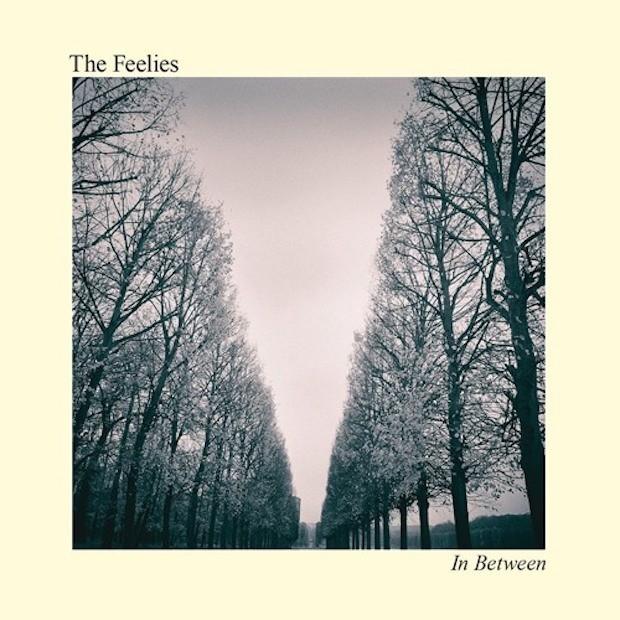 Review: The Feelies – In Between

The Feelies
In Between

Street: 02.24
Bar/None
The Feelies = The Velvet Underground + Yo La Tengo

Modest, low-key and unhurried, In Between is perhaps the most subdued album to date from The Feelies, whose discography spans an impressive 40 years (albeit it should be noted that the band took one major break from 1992 to 2008). In Between retains many of the quirky elements that initially identified The Feelies as a force to be reckoned with during the late 1970s/early 1980s (R.E.M. cited the band’s 1980 debut release, Crazy Rhythms, as a major influence) by shuffling low-mixed vocals beneath a marsh of sharp, rattling guitar tones. At times the album is at odds with itself, juxtaposed between a cool, steady acoustic nonchalance that absentmindedly drifts into darker psychedelia-sounding territory. It’s an album as odd as it is anticipated―simultaneously secretive and foreseeable―imbued with a narrow glance of despondency.

The album initiates with the title track “In Between,” a simple, acoustic song led by Glenn Mercer‘s obedient, pastoral vocals and supported by the slight, articulate percussion of Dave Weckerman. With unhurried certainty, the guitar harmonies and straightforward song structure of “In Between” conjure a paradoxical sense of finality as the introductory song on the album—a nonchalant nod towards the nontraditional direction the album ultimately takes. With low-mixed, layered vocals that evoke similarities to The Shins, “In Between” is a quiet, conclusive track that neither bends nor breaks form within its acoustic ranks.

The sophomore track, “Turn Back Time,” is a delightfully charming, mid-tempo tune guided by crisp, scattered guitars and Mercer’s unwavering dedication to remaining vocally composed. It’s a short song, finishing at just a little over two minutes―simple, sweet and to the point. Picking off where “Turn Back Time” left off, the immediately succeeding song, “Stay The Course,” kicks off with a nod to Harry Nilsson‘s 1971 release “Coconut” and then almost immediately dives into a swirling basin of Mercer and Bill Million‘s laid-back, psychedelia-infused guitars that take subtle turns handing off between solos as the song retains its sparse―and at times odd―mid-tempo harmonies. As one of the more standout tracks on the album, “Stay The Course” is a funky, unpredictable song that ironically doesn’t adhere to its name; on the contrary, this track strays from the foreseeable course of the album while simultaneously interrupting the trajectory of the eight remaining songs.

As perhaps the second standout track on the album, “Been Replaced” immediately summons similarities to The Velvet Underground with its intent, unwavering acoustic torrents that uncomfortably restrain themselves until they reach fruition; the result is a full-fledged, dramatic catharsis. However, what makes the drama of “Been Replaced” unique is the perpetuation of sustained notes that endure from the beginning to the end of the song. It’s a catchy, grungy track that encapsulates a late 1960s-era of experimental rock via repetitive, culminating chord progressions that bloom into a subtle, emotional release so muted it could easily go unnoticed.

Following in the footsteps of “Been Replaced,” the eighth track on the album, “Gone Gone Gone,” is the liveliest track on the album. The track fuses a loud (and at times harsh) tempo with the seasoned trajectory of what could easily be deemed as elements of radio pop, and the track picks up the pace where the emotional catharsis of “Been Replaced” left off and runs with it―ultimately resulting in a slightly neurotic track that spirals into a carefully controlled bridge before reigning it back in. Despite the high-strung underpinnings of the track, it still maintains a sense of control and order.

In Between is a bit of an anachronism in The Feelies’ discography. Although subdued and much less rushed than previous albums, In Between manages to retain the oddball-eccentricity that initially put The Feelies on the map during the early 1980s. In Between takes more patience than the band’s previous albums, but the album is worth the wait. Nostalgic, neurotic and filled with delightful little musical nuances (particularly with percussion), In Between ought to be on your radar as a go-to album this spring.  –Kristin Porter