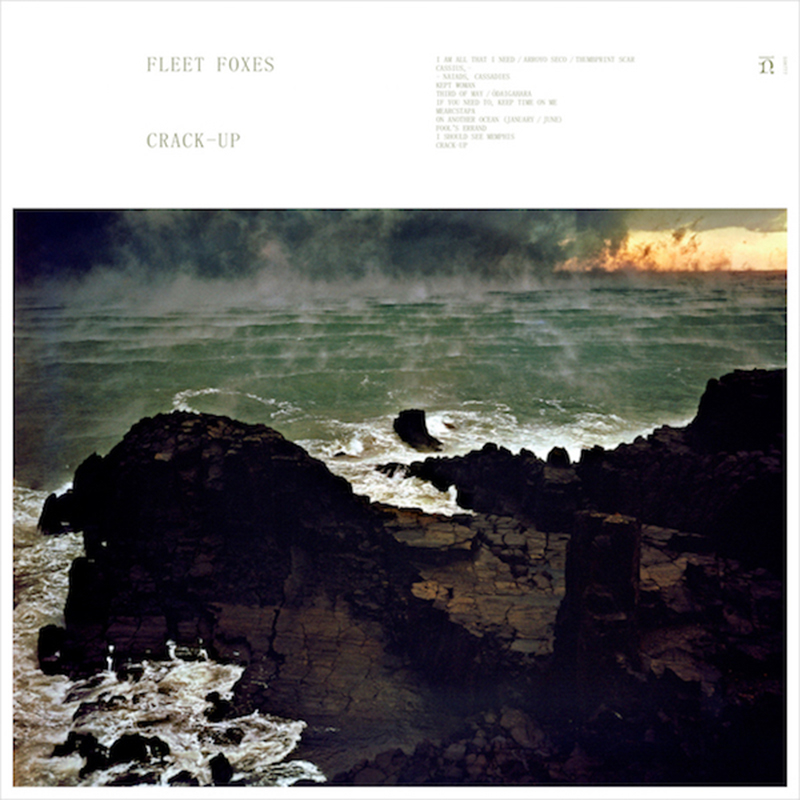 You can all sleep soundly tonight knowing that the wait is over. Fleet Foxes’ long and painful hiatus has finally come to an end with the release of their third studio album, Crack-Up.  The new album quite literally picks up where the previous one left off with its beginning muted notes, played on an acoustic guitar, in the same key and similar tempo as the vocal harmonies that ended Helplessness Blues. The band has managed to maintain the soul of their signature sound, but as the album progresses, one can appreciate just how much their palette has matured. The first single off the record is “Third of May / Ōdaigahara,” which sets the tone for what audiences can expect from this album. This track is the longest song ever released by the band—clocking in at almost nine minutes—and it is truly an epic piece of art. It also does a fine job of tying the previous album to the current one, considering that Helplessness Blues was released on May 3 of 2011.

Musically, Crack-Up is the band’s most ambitious work to date. The diversity of instruments used and the complexity of the textures created are leaps beyond what we have heard from Fleet Foxes before. One element that stands out is just how minimalist some of these textures sound. The fourth song on the album, “Kept Woman,” opens up with a repetitive piano part that resembles a Philip Glass piano étude.  The opening of the seventh track, “Mearcstapa,” has more of a Steve Reich feel—although not as rhythmically complicated, it has enough syncopation and odd timbres put together to make the comparison appropriate. In this song, the use of electric guitar and electric bass is more linear and less grandiose than it is on some of the rest of the album, making it reminiscent of “Music for 18 Musicians.” Another factor contributing to the superb musicality shown by the band throughout this album is how a majority of the songs on the album do not fit into standard pop form and structure. The use of differing sections, modulations of both harmony and time signature, as well as a heavy and effective use of drastic dynamic shifts ring true the notion that the band has presented a cohesive and meticulously crafted work. Songs like “I Am All That I Need / Arroyo Seco / Thumbprint Scar” and “Third of May / Ōdaigahara” perfectly exemplify this. Their skill and style of through-composed songs is similar to that used by Punch Brothers in The Phosphorescent Blues. The album ends with another heroic piece, which bears the same name as the record. In this track, the orchestral strings are more heavily relied on, but the most interesting component is the wind instruments—more specifically, the brass section. Toward the end of the song, they begin to create slow yet thick and rich chords that almost verge on spectralism. The orchestration here is one that would make Sufjan Stevens proud.

Fleet Foxes have already begun releasing future tour dates, and while nothing has been announced for Utah specifically, they will be playing next door in Colorado at Red Rocks Amphitheatre in September of this year. If you have never been to this venue, this concert would be a great excuse to make your way over there. The monumental, anthemic folk-rock that the band expounds would resonate magically in between those spectacular red boulders. –Arcadio Rodriguez