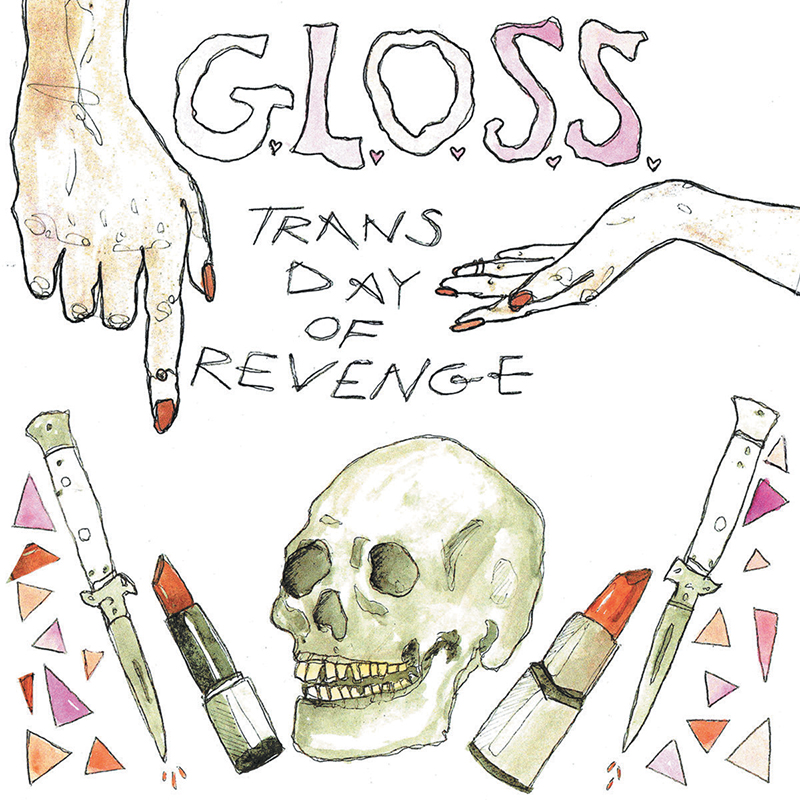 They’ve courted controversy—being accused of being a gimmick, for publicly turning down a record deal with Epitaph, etc.—but in the age of keyboard vigilantism and capital-“O” Opinions being elevated to the level of irreproachable fact, I’m really not interested. It’s obnoxious static, and G.L.O.S.S. rips.

G.L.O.S.S.’ trans-feminist punk/hardcore focuses on issues directly pertinent to them: namely, queer and transgender identity. They are incredible—the polar opposite of the assembly-line, brotastic “you stabbed me in the back” hardcore that’s churned out on a seemingly weekly basis. Their lyrics are substantial, often unapologetically violent, and manage to cover a thesis’ worth of argument in queer identity with punk rock directness and duration. Trans Day of Revenge is a scant five songs and seven minutes long.

The message is only half the battle, though. It’s the music that truly moves, and between their demo and this release, G.L.O.S.S. write exceptional hardcore punk. It’s amazing that after 30-plus years, the same simple chords can really sing. Remember the first time you heard Minor Threat and you totally got it, lyrics and everything? It’s like that.

All of this is certainly enough to propel this release to the top of the heap in 2016, but with the nightmare realization that the country elected the Breitbart comments section to its highest office, Trans Day of Revenge is even more essential. The opening line of the EP becomes all the more poignant than when it was released earlier this summer, with singer Sadie Switchblade declaring, “When peace is just another word for death / It’s our turn to give violence a chance.” If House Bill 2 in North Carolina was enough for G.L.O.S.S. to seem like a grenade, our president-elect weaponizes this into an H-bomb.

There is no subtlety on Trans Day of Revenge, and that’s its greatest strength. It’s vital, angry and relatable—even if their particular identities are not ones you share. “Out From the Desk” is a call to arms in support of survivors of domestic violence, opening with the lines “Bent ears can’t be enough / Out from the desk, let’s all crew up.” From compassion to action—for me, this is the biggest takeaway from Trans Day of Revenge.

“We Live” reminds me of why any of us got into this crazy business in the first place. The song summarizes more perfectly than I ever could why underground punk/hardcore has been my musical center for nearly two decades. “We live / For nights like this / Basements packed with burning kids / We scream / Just to make sense of things.” There can be no message clearer, or more welcome, right now.

G.L.O.S.S. are also calling it quits this year. They are ending their run for understandable reasons, telling Maximum RockNRoll, “The punk we care about isn’t supposed to be about getting big or becoming famous. It’s supposed to be about challenging ourselves and each other to be better people. We want to be whole people, not one-dimensional cartoons.” You can’t really argue with that, but considering where current world events stand, it’s a loss for the punk and hardcore community to not have such a strong and unified voice. –Peter Fryer