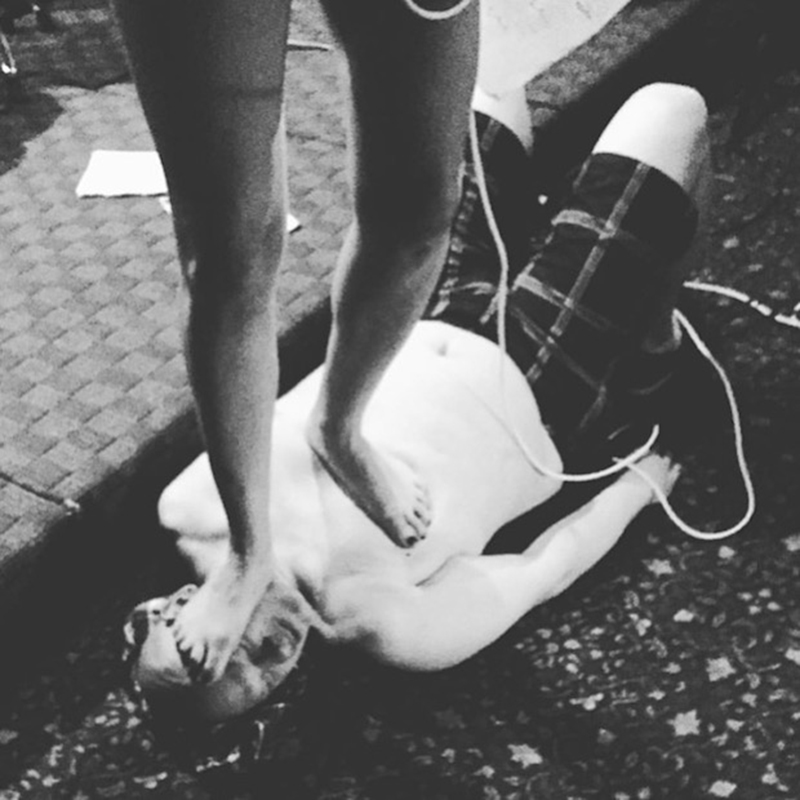 When I think that I’ve seen everything that punk rock has to offer, along comes a band that slaps me across the face and reminds me of how much weirdness there is in this world that can transcended into art. Hit Bargain are one of those bands that, no matter what type of response they get—whether positive or negative—they will leave a lasting impression of “What the fuck did I just witness?” in any viewer’s head. A female-fronted band from Los Angeles that adopted the moniker of ‘queencore’ (a play on the queercore subgenre), Hit Bargain are destructive in their musical delivery and stimulating in their live performances, which center on a new dance that’s being called ‘queening.’ Queening is a dance in which frontwoman Nora Singh, who channels an aggressive stage presence that would rival that of any testosterone-fueled male singer, literally stands, jumps and stomps on top of a man’s stomach and face, inviting female-identifying members of the audience to come up and do the same. However, the act of queening is a win-win situation—the man whose face is getting stomped on is a fetishist who rather enjoys being on the receiving end of a female stomp party. You can see where the aforementioned impression of ‘what-the-fuck-edness’ comes from.

Conducting the wayward sounds of the first wave of American ’80s post-punk and old-school pre-hardcore of the ’70s, Hit Bargain manage to sound both nostalgic and progressive. Singh describes it as “simultaneously exploratory and nostalgic.” “The Circuits That Cannot Be Cut” sounds, at first, like a mid-2000s alternative rock song with a rock-style riff leading the cohesive instrumentation. Singh’s raucous vocals then break through the barrier of expectations and ensure that I am, in fact, listening to a punk band. “Song for Fainting” starts off fairly melodically and reverberated, giving a soothing, ambient feel, but shifts rather dramatically into more sinister riffing with shattering power chords while still resonating with some unsettling sensations. “Major System” is more dance-inducing, with a melodic guitar approach and the accompanying swing-style rhythm. During “Cheap Death,” Mike Stoltz’s bass- heavy sound, combined with some mischievous riffing, made me feel like I would explode at any minute. “No Body” moves a lot slower, but its headbanger-inducing riffs give the track character. “Queening” is the fastest track on the EP, with rapid rhythms and a rallying chorus channeling Singh’s feminist stance (“Perfection! Power! Wealth! Fear!”) that will incite any listener (such as myself) to heed to the fire burning in their stomachs.

Hit Bargain are unlike anything I’ve heard before—they are definitely deserving of the genre ‘queencore,’ because I wouldn’t know what else to classify them as. They’ve taken the best parts of the sounds surrounding the American hardcore movement and injects them with enough womyn power that rivals that of the riot grrrl movement. That empowering aggression is then traversed through Singh’s highly unique and highly esoteric performance. They are a band that definitely isn’t for everyone. They’ve certainly caused a stir in the Los Angeles DIY scene, and for better or worse, they are turning quite a few heads—challenging the status quo and breaking down barriers into new dimensions. But that’s what punk rock is supposed to be, right? –Eric U. Norris