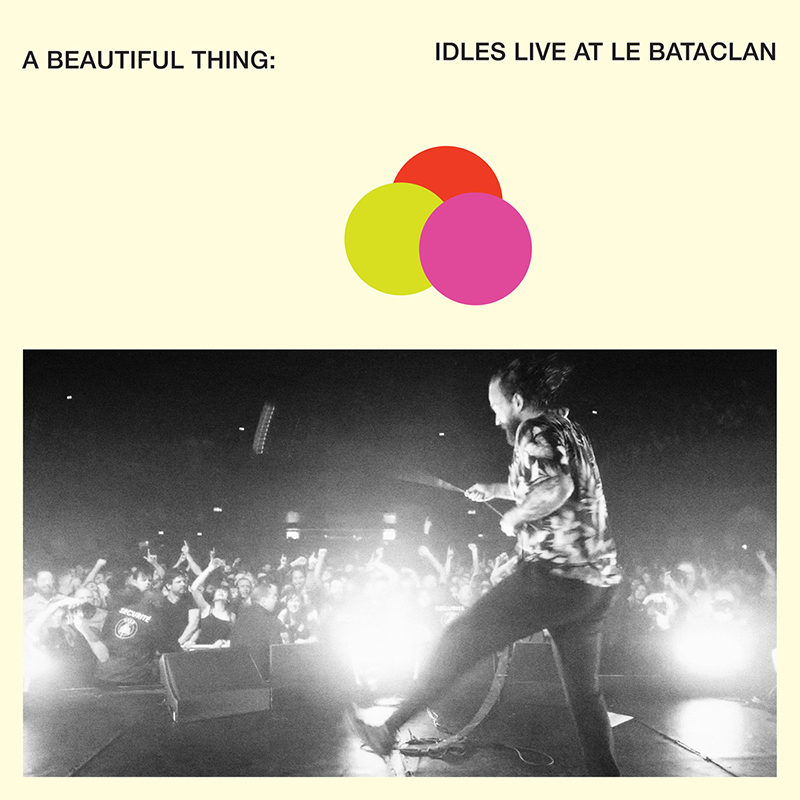 British quintet IDLES have had an almost meteoric rise in the last two years—when I saw them live for the first time, it was in a small room in the back of a Seattle bar. Now they’ll be opening for Pearl Jam on their upcoming European run. Presumably, you’ll have to wait like me until the band is touring off of their third yet-to-be-announced LP to have the opportunity to see them perform again. Fortunately, A Beautiful Thing is here to hold us over until you can get into the pit for yourself.

In a calm before the storm, opener “Colossus” erupts from a slow, trudging track into a sonic frenzy. Frontman Joe Talbot emphasizes the themes of love, respect and care that have been a cornerstone of IDLES’ manifesto, a manifesto that, as illustrated by the audibly immense and synchronous responses from the audience at Le Bataclan (a venue just four-years removed from a horrific terrorist attack), has brought people together and gotten them behind IDLES as a group promoting sincerity and lightness. With the vigor with which IDLES rail against misogyny, toxic masculinity and xenophobia while preaching for mental well-being and inclusiveness, it’s no real surprise when members of the crowd are encouraged to come on stage and joyously sing through verses of songs as they do on “Exeter.”

Talbot proclaims that “this song is an anti-fascist song” before tearing into set-closer, “Rottweiler”—the band makes quick work of the verses and choruses of the song before moving into eight-minutes of a noisy, instrumental rampage. They close with the guttural chant of “long live the open-minded.” During different points of the show, Talbot calls out to the audience in simplistic but appreciated French, saying “thank you,” reiterating some of the groups shorter mottos and extending calls for revolution via the tripartite phrase, “liberté, egalité, fraternité.”

A wonderful bit of extra chaos is added to these renditions of IDLES’ tracks, which cover the majority of the material from both of their studio albums. The music is a bit rougher around the edges, the tightness of IDLES’ brand of dancier, poppier post-punk coming a bit undone under the pressure of impressive, raw energy. “Well Done” picks up enough steam that it begins to feel like the band is doing their best just to keep the train from coming off the tracks. The breakdowns toward the end of songs like “Divide & Conquer,” “Samaritans,” “Television” and “Gram Rock” feel pure, untidy and rapturous.

The 19-song set presented on A Beautiful Thing can serve well as a collection of IDLES’ “greatest hits” so far, as it seems that their first two albums have already produced songs, phrases and melodies that have meant a lot to many and are going to stick with their devoteés while the band ascends to heights that would’ve been thought of as absurd just a couple of years ago. Think what you want about the depth or challenge of IDLES music, but they are simply an undeniable live act. While listening to A Beautiful Thing may not wholly capture the experience of jumping and thrashing around, it does put on display a band that seems to be in total control of their sound with energy and excitement to share. –Evan Welsh