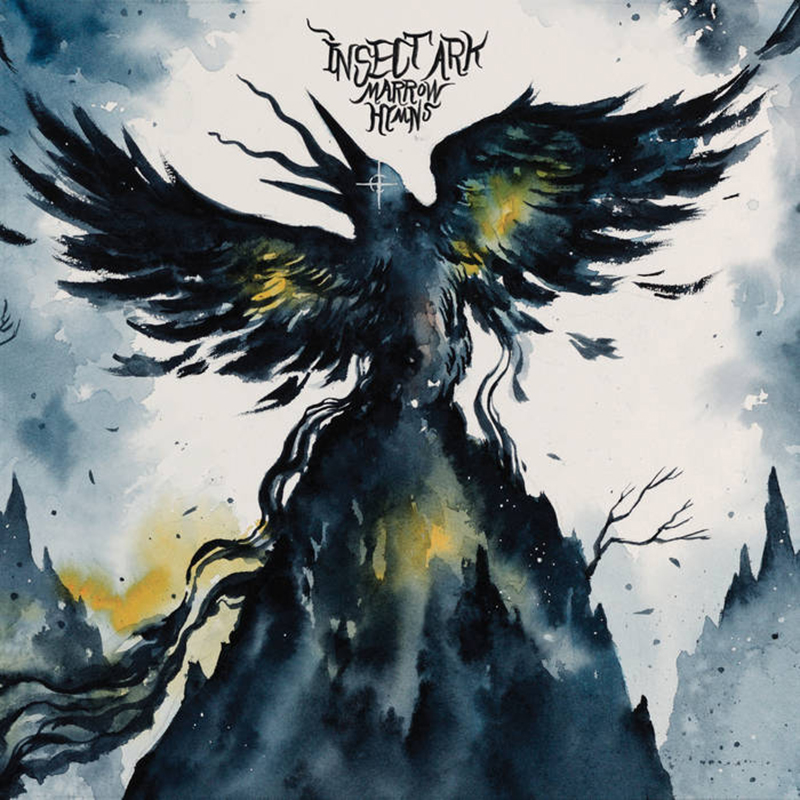 It’s no small challenge to write about metal bands without vanishing within a cloud of hyperbolic clichés about fiery disfigurement, the second law of thermodynamics, or the horrific origins of hamburger and luncheon meats. However, ambient duo Insect Ark make the reviewer’s task less impossible. With the help of black studio magic, Dana Schechter (multi-instrumentalist) and Ashley Spungin (percussion) have created a sound, which, if not entirely without precedent, is nevertheless recognizably their own and firmly under their control.

Schechter began to perform in 2011 as a solo project, and continues to do so on occasion. Meanwhile, Spungin will perform at times under the aegis Ormus. What makes Insect Ark special is, in large measure, their choice of instrumentation. While Schechter seems at ease playing a variety of strings and keys, what is most characteristic and unexpected about the Insect Ark aesthetic is the very prominent use of lap steel guitar. This is a sound I had not before imagined hearing in metal of any sort. The near-universal eschewal of that instrument makes some sense, considering its immediate association with country/western and instrumental stylings from the Pacific islands. Nevertheless, Schechter employs the familiar, high-lonesome wail as a means toward unexpected and compelling ends. Those who balk at the thought would do well to hear and ponder Schechter’s cool musical evocation of never-ending badlands and starlit desert wastes. Marrow Hymns’ songs might run the risk of seeming perhaps too barren, as Insect Ark is a strictly instrumental project. However, Schechter’s guitar expertly assumes the mantel typically reserved for vocals. In this leading role, it conjures all the drama and emotion of actual singing while remaining entirely free of any witless or pretentious lyrics. Recall some of the more moving passages in pieces arranged for orchestra and violin, and you’ll have some notion of the eerie appeal of Insect Ark.

Of course, Schechter’s guitar is not the sole source of the Insect Ark sound. Spungin’s drumming furnishes a solid foundation and framework throughout the nine tracks of Marrow Hymns. But Spungin’s drumming is never overbearing or stifling. Her tactful restraint allows room for Schechter’s guitars to howl and cry like the wind through the cracks in long-abandoned walls. The effect is truly spectral, something not often achieved in doom or horror music. Finally, completing Insect Ark’s array of sounds is Spungin’s use of keys and synthesizers to create a dim cosmic backdrop against which the musical action is set.

Undoubtedly, listeners and reviewers will compare Insect Ark to a number of recent drone and atmospheric acts. Om or Boris might come to mind. However, such analogies leave out an essential aspect of Insect Ark: their penchant for drama. Classic albums from more familiar bands do demonstrate a keen awareness for composition and orchestration. But in addition to this, Insect Ark’s songs are characterized by a deliberate use of dynamics to create a cinematic sense of expectation. Insect Ark push this narrative function further than other bands in the genre. Rather than merely diming and cutting the fuzz box in quick alternation, Schecter’s guitars climb and descend, swell and exhale, gradually and organically. They bring to mind not only the space-cowboy guitars of Daniel Lanois (on Brian Eno’s Apollo, or with Rocco Deluca on Goodbye To Language), but also some of the trippier moments in classic Yes and Led Zeppelin albums, such as Close To The Edge or Physical Graffiti. It’s these far-out and mournful—rather than frenzied and annihilating—moments that make Marrow Hymns an album at once powerful and memorable. Insect Ark touch the listener more profoundly than other metal bands, precisely because instead of hacking and smashing their way into our bones, they instead drift into their center. –Brian Kubarycz