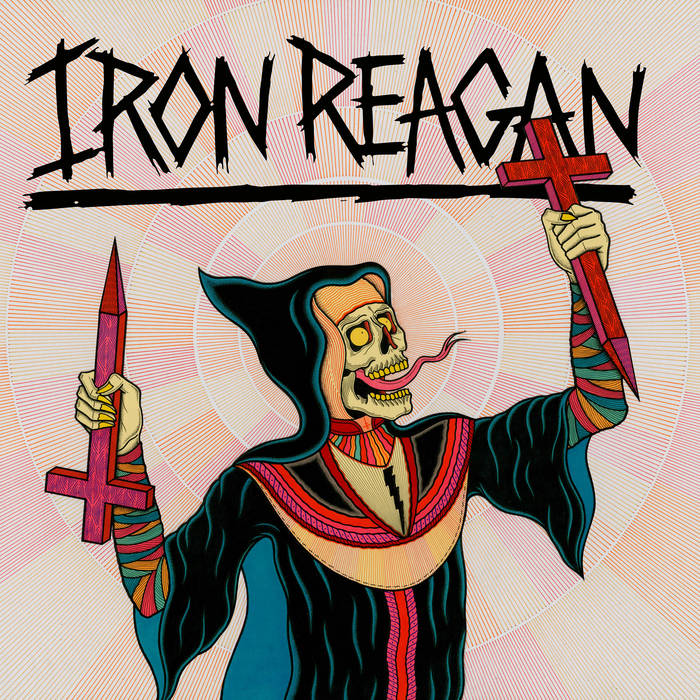 There is no mistaking Iron Reagan (unless you’ve been living under a rock for the past five years)—members of Municipal Waste, Cannabis Corpse, Hellbear, Darkest Hour and ANS came together, blending thrash metal, hardcore and a twisted sense of humor to form one of the most popular bands in the modern metal scene. After signing to the metal powerhouse Relapse Records in 2014 and releasing the widely acclaimed The Tyranny of Will, Iron Reagan blew up as fast as Ryan Parrish’s BPM. With over two years of thrashing the globe and partying along the way, Iron Reagan hopped back into the studio to give their fans yet another plethora of headbang-inducing songs in Crossover Ministry.

The songs range from being short to being at a point where any moment’s distraction would cause you to miss a third of the album. “A Dying World” has just enough buildup as the album opener and carries an onslaught of riffs and chanting vocals like, “Cannot save a dying world!” Then, the songs “Eat or be Eaten,” “No Sell” and “Parents of Tomorrow,” which clock in at 32, 14 and 7 seconds, unapologetically throw you off a cliff with their rampant velocity. “Fuck the Neighbors” is flat out hilarious—the introductory audio creates a vision of a man ringing the doorbell at a house party and asks with his “pencil-pusher” voice when it will be over. You can just picture Tony Foresta as the host standing in the doorway with John Belushi poise and knowing that no matter what his neighbor says, the result is going to be the same. The lyrics capture exactly what we would want to say when a neighbor tells us to keep it down. If Iron Reagan don’t release a music video in which a man in a sweater vest and khakis gets pulled into a thrash metal house show, getting moshed half to death, soaked with beer and eventually thrown out on his ass, I will be disappointed.

So, how does the new album stack up to their previous releases? It’s just what you’d expect from an Iron Reagan album. The songs are short and heavy and leave you feeling like you’ve been walloped in your cranium with a baseball bat. The lyrics make you want to tear your larynx a new one as you scream along with Foresta. I try not to draw comparisons to Municipal Waste as it just seems unfair to do so, but I will say that while I love Municipal Waste, Iron Reagan always take a broader lyrical stance that isn’t all about drinking and moshing. However, Crossover Ministry still exudes the lighthearted, call-to-party vibe that the band members are known for. –Eric U. Norris