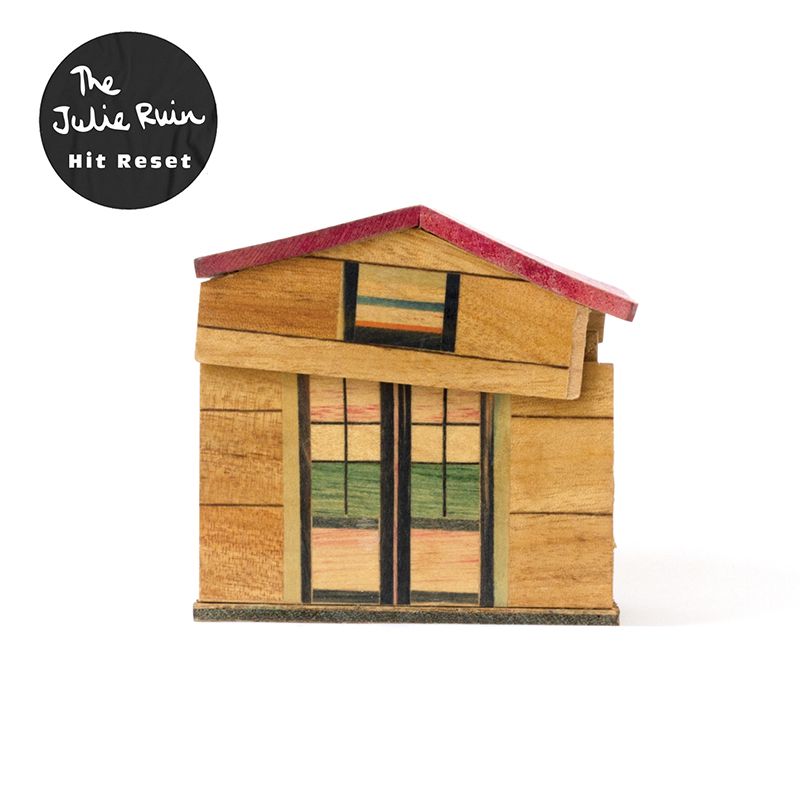 Much has been written about Kathleen Hanna’s angrier, more political days, her riot grrrl revolution and her manifesto that went with it. For now, Hanna is happy to be a member in a band and leave some of that history behind her—like some of the aggression of Bikini Kill. She disbanded her electronic-styled band Le Tigre in 2005 for health reasons, as Hanna would later be diagnosed with Lyme disease. This would all be well documented in Sini Anderson‘s The Punk Singer documentary that debuted in 2013 at SXSW. During her recovery, Hanna spent time giving back. She worked as a band coach for the Willie Mae Rock Camp for Girls and taught a graduate art class at NYU. It would be The Julie Ruin that would become the channel that would bring her back to playing punk rock. “Julie Ruin” emerged as Hanna’s solo alter ego in the ’90s, and evolved into a full-functioning band called The Julie Ruin. Hit Reset is the band’s second release. The band consists of Hannah’s Bikini Kill bandmate Kathi Wilcox, Kiki and Herb‘s Kenny Mellman, Carmine Covelli and Sara Landeau. The Julie Ruin announced their return with the lyric video for “I Decide,” staring Waxahatchee‘s Katie Crutchfield walking down an Austin street during SXSW. This video heralded not only the new album by The Julie Ruin, but also the return of Kathleen Hanna.

The song “I Decide” is a return to the manifesto that was written 23 years earlier: Hanna is still in charge. She sings on the track “And I might make mistakes and chances / Though I may be at a disadvantage / But I, I’ll decide.” She also comes to terms with the pain: “You might be a thorn I witnessed / To pain I need to co-exist with / But I, I’ll decide.” Hannah sings these declarations over a simple driving percussion and a buzzsaw guitar fuzz. Throughout this record, her vocals sound, at times, like a taunting girl on the playground, and at other times like the primal yell of Johnny Rotten. The band fills the album with cartoon sounds, surf rock slides and hand claps all sewn together by an aggressive guitar that provides the sharp edge. The almost spoken word of “Mr. So & So,” the rocked-up opener “Hit Reset” and the little bit of funk from “Time Is Up” are all standout tracks. The final track, “Calverton,” is a slow burner, leaving the rage behind for a little heart. Its heartbreaking lyrics close the album: “Without you I might be numb / Hiding in my apartment from everyone / Without you I’d take the fifth, or be on my deathbed still full of wishes.”

In Hit Reset, Kathleen Hanna is still telling her story. We all need something to be afraid of, angry at and fight against. In the end, Hannah is right: “We belong to the wolves that drug us.” We may be dealing with the wild animals, but every now and then, we get the wool pulled over their eyes. And that’s enough of a riot. Welcome back, Julie Ruin. –Russ Holsten