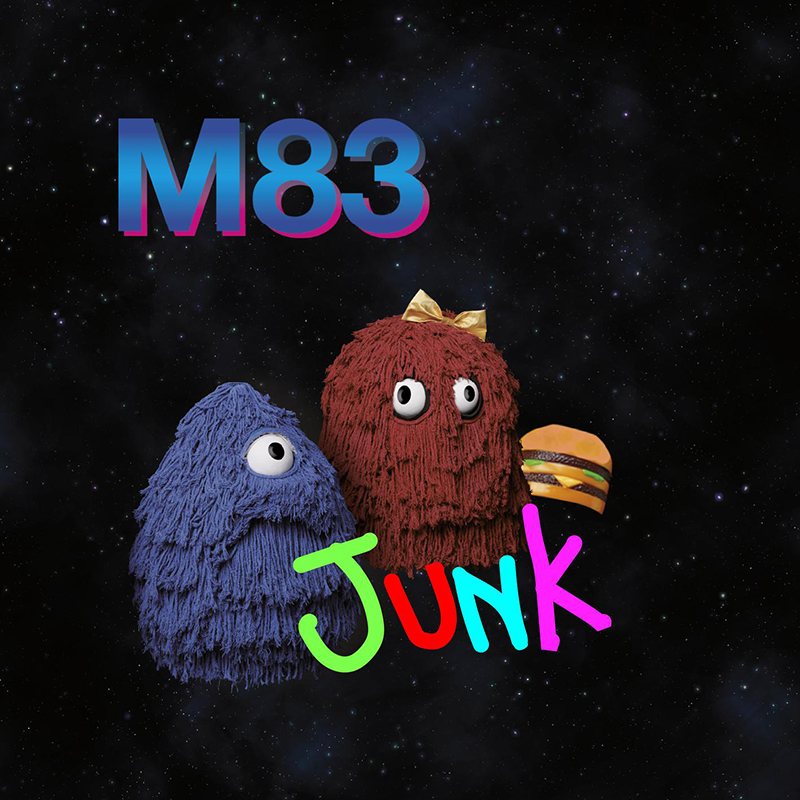 Five years since Hurry Up, We’re Dreaming and several movie soundtrack compositions launched M83 triumphantly into the mainstream, M83 auteur Anthony Gonzalez has brought his space-age electronic pop in a new direction, one informed by equal parts nostalgia and genre expansion. Junk, the mostly positive—and not unwelcome—result of Gonzalez’s effort, maintains M83’s signature cinematic sounds but veers away from the grandiose and colossal. A surprising step in M83’s creative evolution, Junk is its own category, apart from Before the Dawn Heals Us’ haunting shoegaze, the urgency of Saturdays = Youth, the experimental noise of You and the Night. Instead, M83’s latest is an eccentric, genre-reinventing medley of vaporwave and bubblegum pop.

Album opener “Do It, Try It” is a fantastically compelling (and catchy) collage: It quickly launches into the frenzied, sweeping synths and lyrical hooks that so typify M83, but it does so while grooving along to a bopping house piano and bass accompaniment—and manages to throw in a quintessential EDM buildup, too. In the upbeat “Go!,” smooth sax and French chanteuse Mai Lan’s upbeat vocals count down to a minute-long, ’80s-style guitar solo performed by none other than Steve Vai. Lan returns with French speak-sing vocals in Junk’s standout dance track, “Bibi the Dog,” which recalls the hypnotic swagger of La Femme, and channels Jane Birkin–esque, lilting croons in a duet with Gonzalez for “Atlantique Sud.”

Junk pays genuine, unpretentious tribute to ’80s pop culture—the smooth jazz, the campy TV jingles, FM radio’s bubblegum choruses and hooks—and does so with a sophisticated polish that only M83 could swing. They’re most successful with tracks that genre-bend: “Road Blaster” cruises along with an easy beat, crystalline synths and a semi call-and-response; instrumental track “The Wizard” is pure, swimming-pool vaporwave with an M83 flair; and the mesmerizing “Tension” is replete with tinny keyboard and old-school video game tendencies. Junk does come with its disappointments, however. “Moon Crystal” is 100-percent the type of smooth jazz piano tune you’d hear in a stuffy mall elevator … and nothing more. The new wave/funk vibes in “Time Wind” feature Beck, who, to his credit, brings a subtle sense of longing and depth to an otherwise unremarkable ’80s number.

Junk is an intriguing shift in M83’s continually evolving oeuvre, and for every saxophone solo or kitschy piano rhythm, there’s still a cachet of M83’s quintessential sonic gems. Gonzalez’s luminous falsetto and string accompaniment on “Solitude” and the slow, haunting synth chords of “Ludivine” are explicit reminders of M83’s previous releases. “For the Kids” builds from Susanne Sundfør’s pleasant but perplexing soft-rock ballad to a child’s voice recounting a poetic fairy tale with implied, lofty truths—just like Hurry Up’s “Raconte-Moi Une Histoire.”

As always, M83 have successfully reinvented themselves. And weirdly, moving away from soaring, stately astral soundscapes and toward ’80s pop—with all of its glossy, plastic, smoothed-over bubblegum tones—has been M83’s most adventurous step yet. “Anything we create today is going to end up being space junk at one point,” says Gonzalez in the album’s press release. “I find it really fascinating and scary at the same time, and beautiful too in a way.” With Junk, M83’s creative freedoms—and hopes—come in the concrete homage, a far cry from the band’s regular tendency toward concept albums. M83 succeeds in their defiant refusal to live in the shadows of their previous successes or the pulls of mainstream pop culture. Most of all, Junk is sincere, capsizing any presumption that fun-’80s-vibes-and-bubblegum-synth-pop is any more “space junk” than whatever else (however grandiose) we create. –Kathy Zhou