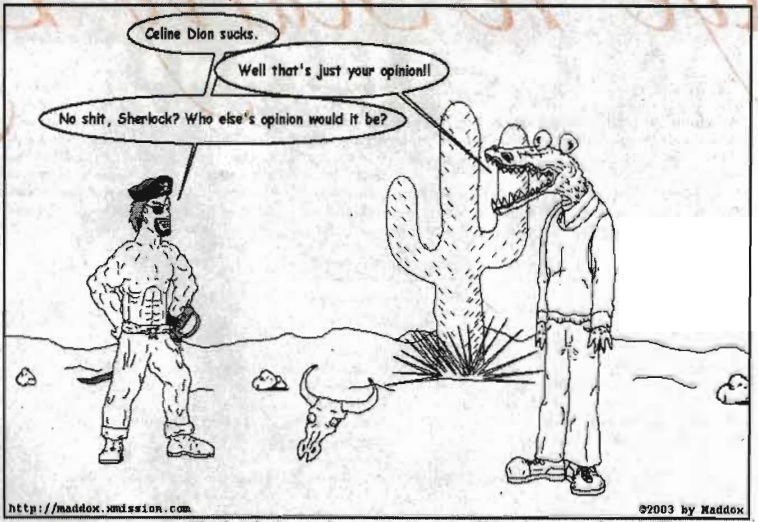 It Rocks, But Is It Pirate-Worthy? Maddox Editorial have been trying to answer one question about pirates for years now: what is it about pirates that make them so awesome? This debate came to rest with newly discovered evidence of pirates having giant, life-threatening penises with which they regularly bludgeoned women, children and weaker men. However, even in spite of everything we know about these burly concentrations of high-sea ass-kickery, most people don’t know what kind of music pirates listened to.

[Maddox is a PIRATE, blowholes!]I researched this on Tower Records’ website recently, just to get a feel for what kind of music people think pirates listen to. Here are the results:

Mad Caddies – If you’re a fan of whiny, angst-filled crap, you’re in for a treat with this album. Most of the songs on this here record are ranked somewhere between sucking giant rhinoceros cock to sucking moderately sized rhinoceros cock. In spite of this, however, the band does manage to pry their lips off the teat of mediocre shit they feed on long enough to produce track 7 titled “Weird Beard.” Pirates and lumberjacks would agree that this song is adequately genuine pirate music. The song titled “All American Badass” is also tolerable, but could be improved with less singing (like 100% less) and a chorus made of men instead of whiny assholes.

Bedtime Stories for Pirates – Captain Bogg & Salty – The liner notes for this album states “songs and stories for buccaneers of all ages,” but I think they explicitly meant to exclude pirates of age 26 or older. I think that if you were to find me with my eyes stabbed out by a pair of blunt pliers and this CD on my chest, no further explanation or suicide note would be necessary. I’m going to be completely honest: until today, I have never cried in my life. Ever. This CD made me weep uncontrollably. And by weep, I mean masturbate and play video games.

Once Upon A Wave – Pirate Jenny – This album has a song on it titled “Sensitive Guy.” Here are a few steps you can take to save $14 on this title: 1. Cup your hands 2. Squat down and pinch one into your cupped hands 3. Cover your ears.

Rancid – Rancid – Fans of “Mad Caddies” will appreciate this aural diarrhea. Yes, this means you Mr. Studded Belt dumbass with the stupid fucking haircut drinking your latte at Coffee Break. The cover of this album is misleading. Hell, when I first saw the familiar “Jolly Roger” (skull and crossbones), I thought to myself “holy shit, my pirate brethren have signed with a record label.” Fucking wrong. Rancid is by far the worst group I have heard today. This band takes mediocrity to a science. If you dropped a Rancid CD in a record store, you’d be cited for littering.

It seemed hopeless at this point: where could I find some genuine pirate music? Then I remembered a band that a friend of mine in Norway referred me to:

Storm – Nordavind – Holy shit, finally some real pirate music. This is what metal would sound like if Vikings weren’t wiped out by venereal diseases. Unless my ears deceive me, I could have sworn there were kids singing on a few of the tracks, but it’s probably remnants of that Rancid dog shit I heard earlier. I can’t believe how awesome this CD is. I bet Thor murders orphans while he listens to this album. I swear I popped a boner the first time I heard the song “Oppi Fjellet.” Awesome.

Other than Storm, the only other bands I’ve found worthy of being associated with pirates are: Pantera, Slayer, Sepultura, Prong, and Lamb of God. Of these, the band people are probably least familiar with is Sepultura. Pick up the album “Chaos A.D.” or go to hell. The best song on the album is called “Nomad,” a song in which the lead singer steps out of your speaker and has sex with your sister. Some of the tracks on this album have a strong Brazilian feel to them, which doesn’t really mean anything coming from me because the only other Brazilian music I’ve heard is Bossa Nova (you may have heard some while gorging on rattlesnake sausage at Rodizio Grill). Perhaps Sepultura will cover “The Girl From Ipanema” with Astrud Gilberto some day. Until then, pirates will have to be content with some of the hardest hitting metal in the universe. Slayer for mayor.