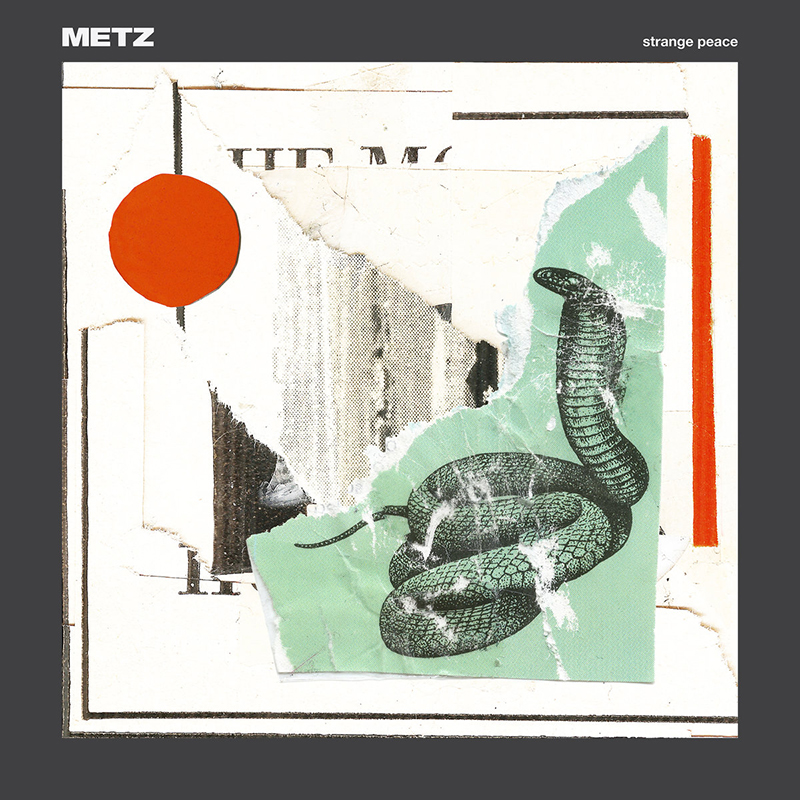 METZ are a perfect example of what is most holy about modern music: noise, volume, controlled chaos and energy without end. The Toronto-based trio’s third album is a continuation of the frenzy previously displayed in both their debut and sophomore albums. While tighter and more focused, Strange Peace still showcases and retains the band’s desperate, frenzied sound, while never falling into the trap of coming across as full-on fits of jarring noise.

Working with legendary sound engineer Steve Albini in his Electrical Audio studio in Chicago, it’s ironic that Strange Peace is the album when they finally found one another, as both METZ’s debut album and its follow-up, II, were more in line with Albini’s trademark sound, and perhaps more akin to his own band Big Black. The tape and analog equipment used lends to Strange Peace perfectly, imparting a warm, fuzzy sound, while the rhythm section benefits from Albini’s focus and expert mic placement.

Strange Peace’s opening track, “Mess of Wires,” begins with the cue, “You are rolling,” before METZ’s surge of hysteria rears its head, the song title a perfect description for their unique brand of sound. This sound bleeds through even onto the album’s third track and radio single, “Cellophane,” with a repetitive riff bringing to mind images of Duane Denison’s explosive playing on The Jesus Lizard’s Goat album, its monotony broken up by a short, screeching solo.

The album’s fourth track, “Caterpillar,” shows METZ as we have not heard the trio before: a dark and discordant passage into territory that brings back memories of Slint or Shipping News as they cast aside their usual maniacal approach in favor of a steady, jarring rhythm. This mood carries over into the next track, “Lost In the Blank City,” a desperate and grave-sounding track that never truly climaxes, with drummer Hayden Menzies feverishly destroying his kit.

If one were to take Nirvana’s “Territorial Pissings” and decide to make it even more jolting, while lending a pensive approach to it, the eighth track, “Common Trash,” would be the appropriate answer to that, with vocalist/guitar player Alex Edkins sneering, “Wade through the common trash / We’re all just common trash.”

The album draws to a close with “Raw Materials” and what may be the standout track on the album with the trio all going through the paces as Edkins’ maniacal howl echoes atop bass player Chris Slorach’s cannon-like basslines and Menzies’ relentless percussion. These parts in unison are occasionally broken up by Edkins’ guitar playing, which comes across like Swell Maps on amphetamines and is as crushing and earsplitting as anything noise-pioneers Cherubs put out in their early years.

If I had a dime for every noise-rock band I’ve heard, I could afford to fly around the world. If I had a dollar for every band that did it well, however, I’d be piss-poor. METZ, however, easily stand out among their contemporaries, with Strange Peace being the perfect follow-up to their first two albums. It is a refreshing and honest album, its energy pure and unadulterated. While effortless may not be the right word to associate with a band running on such high levels of caffeine as METZ seem to be, this album places them a cut above nearly everything available today. –Ryan Sanford