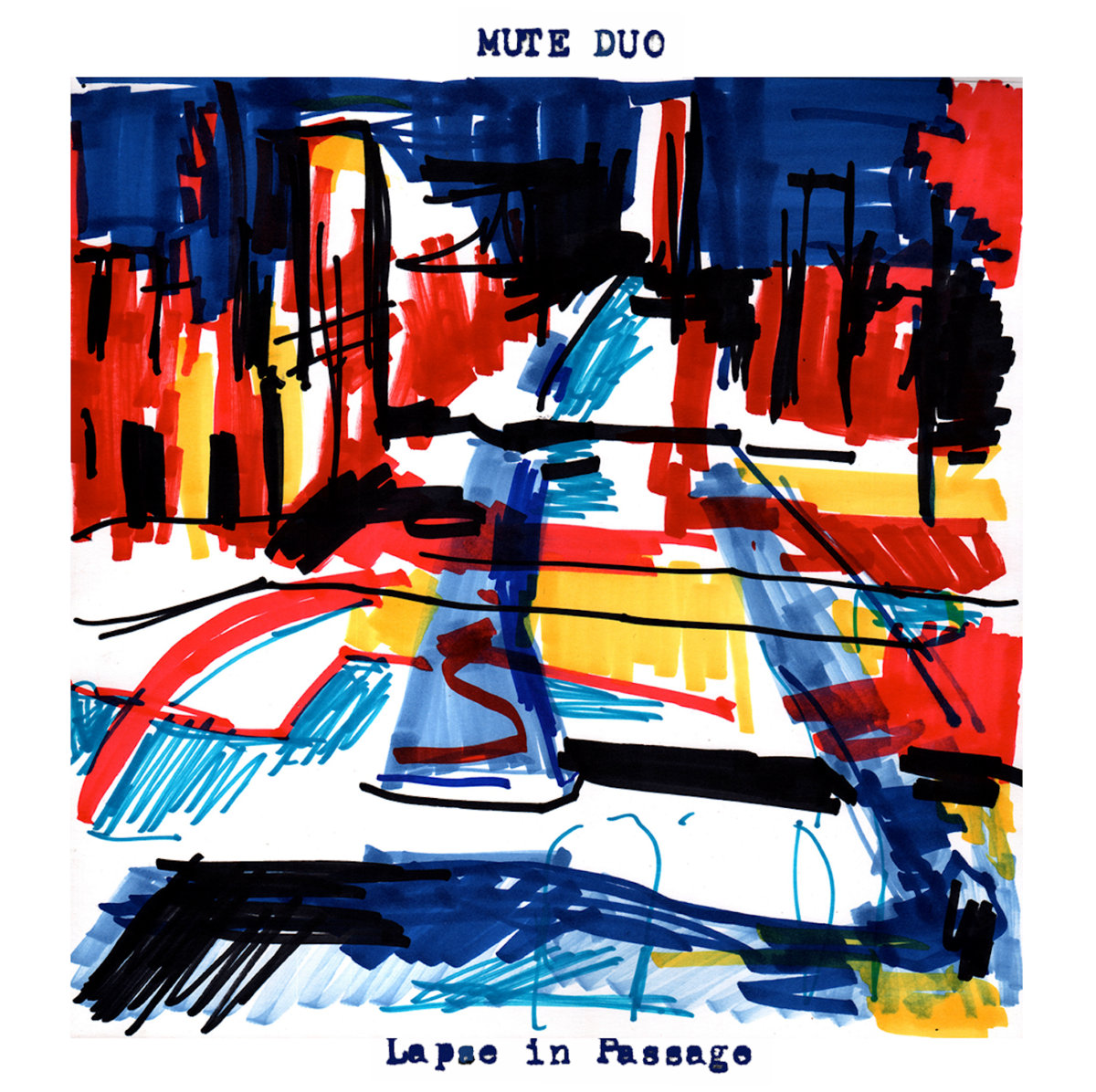 When examined broadly, arid desert landscapes can appear still, vapid and lifeless. The connections between the system’s parts are hidden by the quiet pauses that exist between its moments of drama. Still, with some investment of attention, it is clear that the macrocosm is working together. The exciting whirlwind of a dust devil can only rise where enough particulate has settled down. Soil-dwelling insects are unearthed in the process, and the birds are standing by. This is the kind of cohesion found on Lapse in Passage, the new album from Chicago-based ambient two-piece Mute Duo. While Sam Wagster’s lilting pedal steel creates a thick, slowly ambling atmosphere, Skyler Rowe’s percussion conjures feverish energy seemingly from nowhere. The world created as a result of this contrast has, at times, the cohesive harmony of landscape ecology.

Many of the individual tracks on Lapse in Passage share a similar narrative shape, more of a continuous build than an arc. “Canopy Bells,” one of several singles, is a lovely example of this. Wagster’s guitar croons lazily to open the composition. His caress of the pedal steel here is sluggish, as if in the midst of a sweltering summer stupor. Over the course of the next eight simmering minutes, various percussive elements—including wind chimes and cymbals—join in with increasingly unbridled intensity. During the track’s final two minutes, syncopated drum hits cascade down with the severity of El Niño—long awaited and gushing. It’s a release as satisfying and complete as rainfall after a devastating drought.

For the ambient genre, there are a lot of approachable forms and structured catchiness to be enjoyed on Lapse in Passage. On “Past Musculature Plains,” a driving rhythm played on the ride cymbal provides a clean foundation that lifts the guitar playing out of its wandering and into a sweet, decisive groove. A prolonged two-minute period mid-track is catchy and repetitive, like the encore performance of a country-leaning jam band. It wouldn’t be out of place as the bridge of a Kurt Vile song. These head-bobbing episodes that result from the brief stints of melodic predictability on the album are short lived. Soon, the structure breaks down, and we are back to moseying among the dissonant chimes. These transitions between order and disorder feel organic: It’s the soothing return to entropy in action as usual.

Four of the eight tracks on the album run over six minutes long. While the collection as a whole does not feel excessive or tiresome, there are some moments that do not fit gracefully into the otherwise unified soundscape. On “Red-winged Blackbirds,” the guitar’s looping refrain echoes like church bells, while Rowe plays a sort of unhinged, soundcheck-style roll around the drum kit. It’s certainly cacophonous, but the subtle underpinning of melody found on many other tracks is lacking. Moments like this one are missing the careful intention that allows the delicate environments of Mute Duo’s sound (at its best) to thrive. “A Timbre Profile,” with its punny title and 49 second duration, also feels like an outlier. On an album that builds its sonic vocabulary around the hot, terrestrial twang of the pedal steel, this short interlude is eerie and cold, like the dark depths of the sea. It’s a track from a separate setting.

Overall, rollicking drums and lethargic guitar make a strange and sublime partnership on Lapse in Passage. To complement these backbones, other instruments such as saloon-style piano and a plethora of chimes succeed in building an immense and nuanced field of sound. This is a world as vast as the grandest desert—so obscured by dust and heat that the horizon ceases to exist. Lapse in Passage is an examination of the slow build. Track after track, melodic chord progressions give way to roaring climaxes. With the kind of drama and subtlety that honors the complex systems of our world, Mute Duo have crafted a compelling world of their own. –Austin Beck-Doss