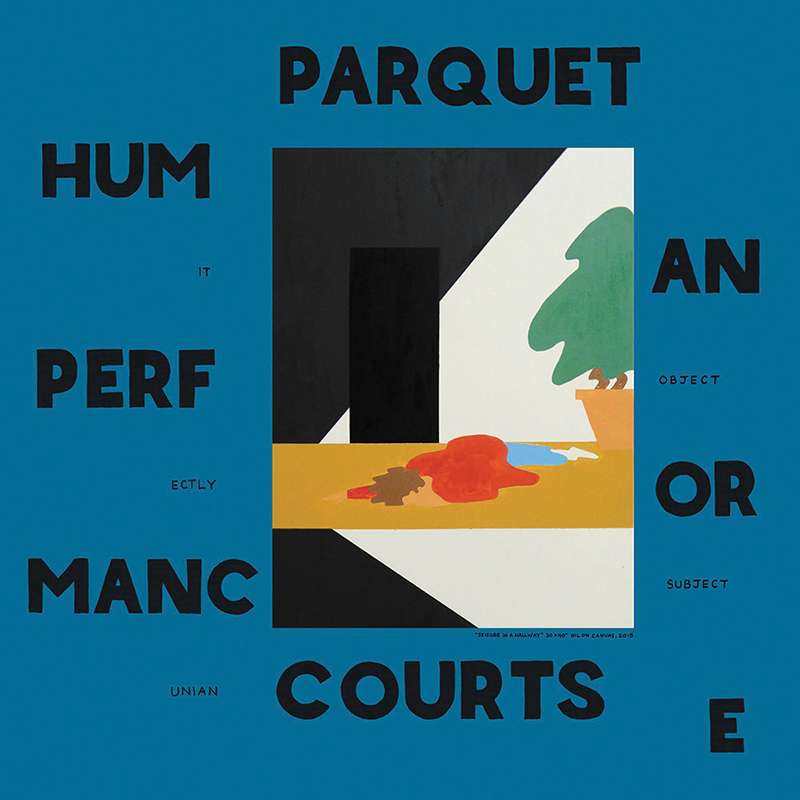 I try to remember that music reviews are usually little more than entertaining displays of bias, and Parquet Courts put mine on parade—raw recordings, vaguely ’60s, Western tones, deadpan delivery and literary lyrics. I’ve been smitten since the first listen. For their fifth studio album, Parquet Courts haven’t deviated far from the quintessential sound that they’ve been cultivating for years. However, coming off of the moody and media-frenzied Content Nausea, the theme of Human Performance continues with self-examination and self-criticism in an increasingly distracting world.

The album starts off with the mind-emptying mantra jam “Dust,” whose tom-heavy cadence leads to the amusingly simple, metaphorical command: “Dust is everywhere / Sweep!” Frontmen Andrew Savage and Austin Brown repeat the chant in unison as the song builds into a piling and overwhelming crescendo that finishes with the blaring horns of street traffic and winds from tall buildings. It suggests the feeling of a New York setting that Parquet Courts have been simultaneously rejecting and embracing in their music for some time—and even later in the same album with “One Man, No City.”

Head cleared, we’re led into the title track, which depicts the ending of a relationship and the speaker’s sudden reassessment of his identity—“Is love just a performance? Is grieving a performance?” etc. Savage calls out “Phantom affection gives a human performance / Witness it now / Fractured and hurt” with a rare use of echoed vocal effects to amplify the feeling of longing. This issue of loss and isolation recirculates again and again in different moments throughout the album. In The Velvet Underground–esque lullaby “Steady On My Mind,” Brown sings, “I’ve never felt committed to much but that don’t mean that I can’t learn / To reciprocate what you send my way,” and in “Berlin Got Blurry,” Savage says, “Feels so effortless to be a stranger / but feeling foreign is such a lonely habit.” The band seems to be consistently struggling to reconcile their human desire to feel connection and the solipsistic byproduct of independent youth culture (see also: Father John Misty’s I Love You, Honeybear).

That being said, the sound of the album somewhat recalls Sunbathing Animal, but is much less aggressive. Their rowdiest song, “Two Dead Cops,” is familiar in spirit, but isn’t quite as punchy as some of their previous punk tracks like “Ducking & Dodging” or “The More It Works.” Instead, most of the tunes take place in mid-tempo rhythms and have a somber quality without getting as experimental as they were in last year’s Monastic Living. Personally, I don’t think Parquet Courts need to be jumping up and down all the time to make a good record. “It’s Gonna Happen,” for example, is an intimate closing song that also holds the lyrical weight of their usual songwriting (another subversive love song, by the way). Still, taken broadly, the album is a little underwhelming, considering the band’s capabilities—and that hurts to say.  Maybe it’s the lack of memorable lines or maybe it’s just the result of their maturity, but I didn’t have as strong of a connection this time around. Fans of Parquet Courts will be undoubtedly excited just to hear new content from these guys, but lukewarm listeners can probably steer clear without missing out on much. I’m hoping that this album will be the stepping-stone to more emotional exploration in the future. –Nic Smith