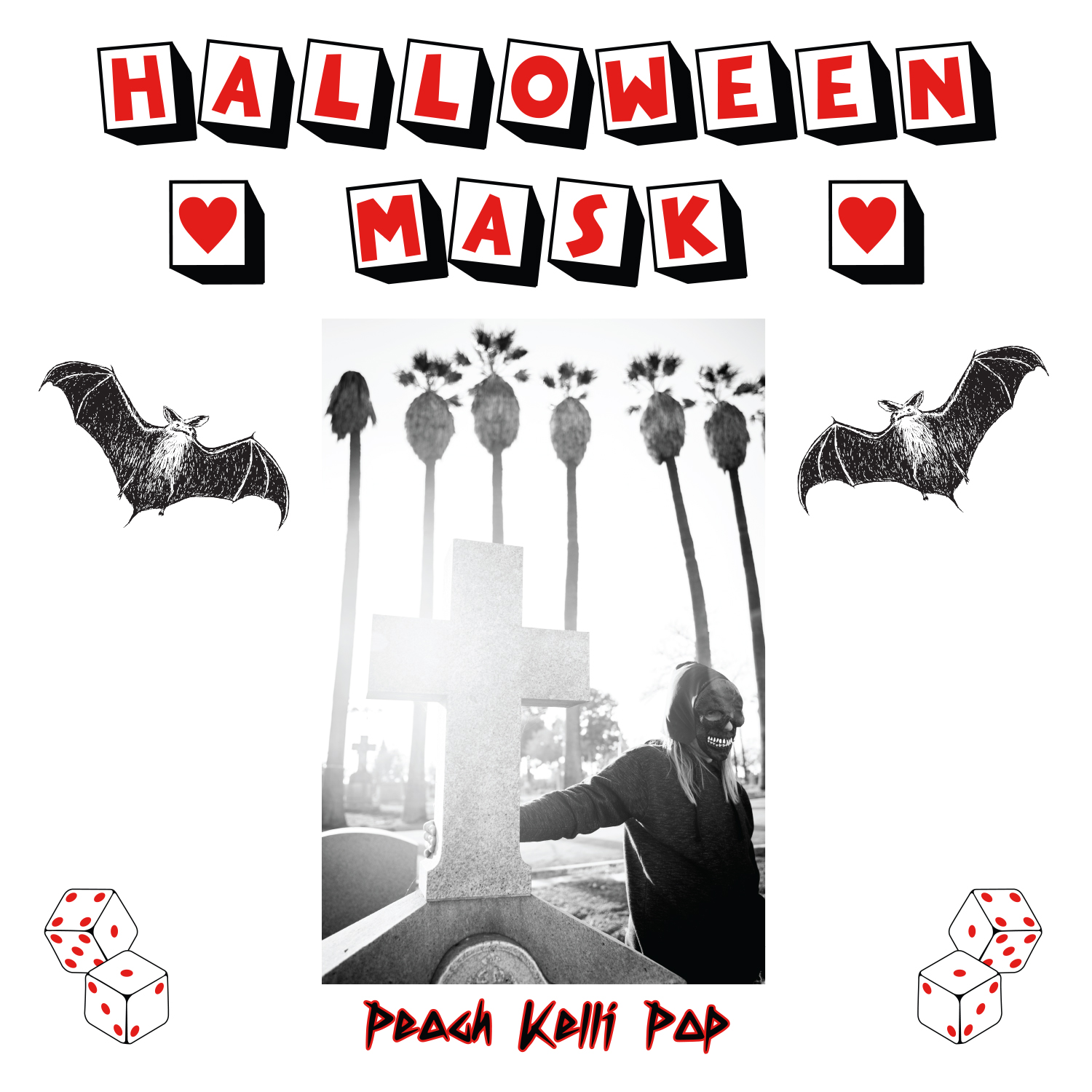 If one were to look up bubblegum rock in the 21st Century, they’d almost certainly come across Peach Kelli Pop at the top of a long list. Their records consistently provide a listen that is sugary, sweet and sure to rot the teeth. It is music that one can either ignore or be enveloped by, with its satisfying yet bordering-on-bland poppy flavorings. The Halloween Mask 7” is no different in this regard, although the title song is somewhat sober, if not altogether disarming. Don’t get me wrong, though: Fans of catchy, bubblegum pop made for short attention spans will be right at home with this new release.

The overall, sweet nature of Halloween Mask is plain to see. The sound is simple and lulling. One could switch this on and have it in the background without any disruptive repercussions. If left on, it would serve as the noise with which to filter out the deafening sound of silence. On the other hand, though, if allowed to be on a constant repeat at volume level, that risks the ire of the sleep-deprived. These tracks might subvert any and all who are willing to resist the sweet, contaminated machinations of lo-fi garage pop. Vocalist Allie Hanson is almost unassuming with a voice that lures seekers of pop rock n’ roll to their imminent immersion into the sounds of lollipops and fuzzed-out daffodils. One could almost think of the long idealized personae of 1960s girl groups when considering Peach Kelli Pop, sans the edgy and razor-sharp attitudes. No, Peach Kellie Pop invoked their style, perfecting the short and sharply sweet.

Of note is Peach Kelli Pop’s “Hundred Dollar Bill.” According to an article published by AV Club on April 14, the track was brought on by Hanson’s experiences at several strip clubs in East L.A. She wanted to write about the experience of money, power and sexuality from a woman’s point of view. The number is total and unequivocal power pop. This is probably the one track that, by sheer, uppity sound alone, manages to capture and hold my attention for the short span of about two minutes. In other words, it’s perfect for the addled mind of every poor soul in the millennials club.

Overall, it’s not hard to see or, for that matter, hear why this rock n’ roll is appealing. Peach Kelli Pop’s Halloween Mask maintains the logical continuation of the power-poppy, bubblegummy goodness that we have all come to expect and—let’s face it—love about this band. It’s not complex: It’s cutesy rock n’ roll—with subversive, ready-to-kill, extendable claws. Be sure to pick this up and lump it over with the rest of their records. Halloween Mask is quick and punchy and, perhaps more importantly, really easy to digest. Be sure to play this loud or have it on as subversive background noise. Either way, you’ll be under Peach Kelli Pop’s diabolical bubblegum spell, from which I doubt even you, the ready listener, will be able to escape. ¡Viva! –Nick Kuzmack