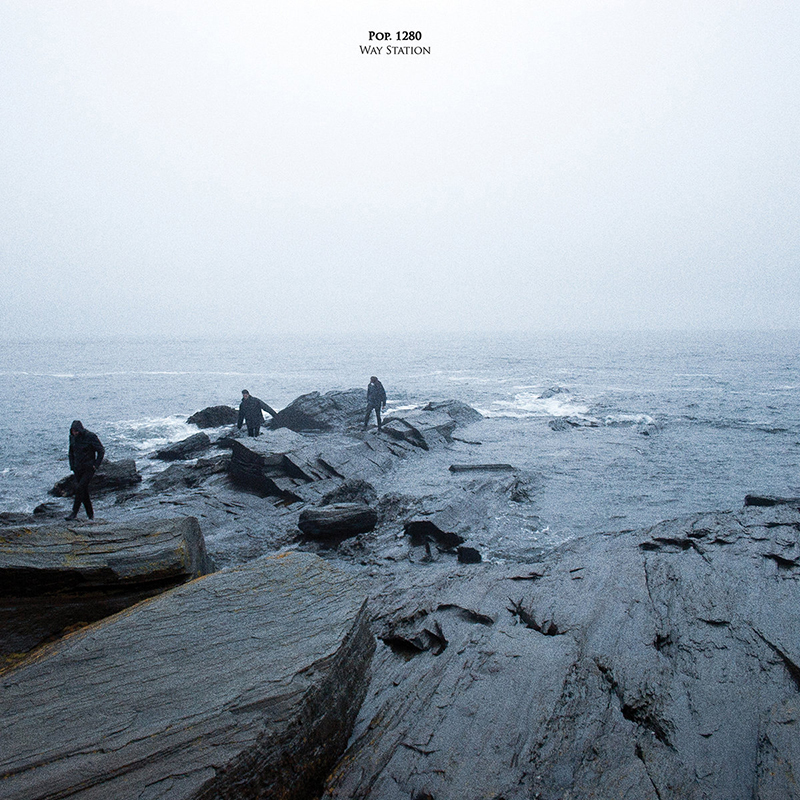 Sometimes you must examine what a band is going through when they made an album. Pop. 1280’s Way Station is one of those albums. This album had me questioning many things as I listened to their music and lyrics and noticed the motifs in their song names: “Under Duress,” “Hospice,” “Monument,” “Empathetics”—did someone die? Is someone dying? Are these titles reminiscent of who someone once was and who they are now?  The music, combined with the track titles and lyrics, made me understand I was listening to an album that contained enough emotional significance to be as poetic as it was chaotic and destructive.

Like the track titles, the music is a whirlwind of anger, sadness, confusion and old-school industrial experimentation. Way Station uses a mix of chaotic disjointed synths, eerie background effects, piano and guitar that creates a familiar sense of early industrial nostalgia. “The Deserter” is a great example of the use of guitar, piano and synth. This song really resonated with me and had me picturing being the only survivor in a lost, post-apocalyptic battleground.

You always need to find the right song to begin and end an album, and Pop. 1280 did that brilliantly. The album opens with the thudding drums and hissing synths of “Boom Operator” and concludes with the subdued and almost desperate sound of “Secret Rendezvous.” This closer ties together the album’s lyrics, track titles and musical experimentation.

“Doves” is a track that I have had on endless repeat. This song takes elements of goth rock, industrial and experimental electronic and mixes them together to create a soundscape of a sci-fi bar you were told not to go to.

Given that Pop. 1280 obviously has some significant industrial inspiration and is working to bridge the gap between modern-day industrial and 1970s avant-garde styles, I found myself intrigued by what other aspects of modern day industrial the band might incorporate into their next album. After listening to some of their back catalog and then listening to this album, it sounds like they could seamlessly pull together elements of 1980s industrial, 1990s industrial rock, EBM and electronica to create a sound that has a classic tone and feel but is also fresh and new. Pop. 1280’s mixing of genres, styles and techniques is rare and something I always enjoy listening to.

Any fan of industrial, experimental electronic or experimental alternative would enjoy what Pop. 1280 is creating. Fans of these genres might also enjoy hearing a progression from 1970s industrial to something more modern. A good example of this is “Leading The Spider On.” This track has guitars that vaguely resembles classic rock, vocals that are almost punk, and backing synth and distortion that is reminiscent of the early days of industrial. Had this track combined elements of 1990s or 2000s industrial, you would have a track that creates an industrial sound that harkens back to the 70’s and 80’s but is also approachable by younger generations not as familiar with the genre.

I have always enjoyed music that combines other genres and is willing to break the lines that have been arbitrarily drawn around genres and styles of music. Music is inherently experimental, and industrial music has always crossed musical genres and sometimes has destroyed them (I’m looking at you, EBM). If you are a fan of industrial, experimental electronic or dark electronic, I highly suggest you give Way Station a listen. –Seeth McGavien