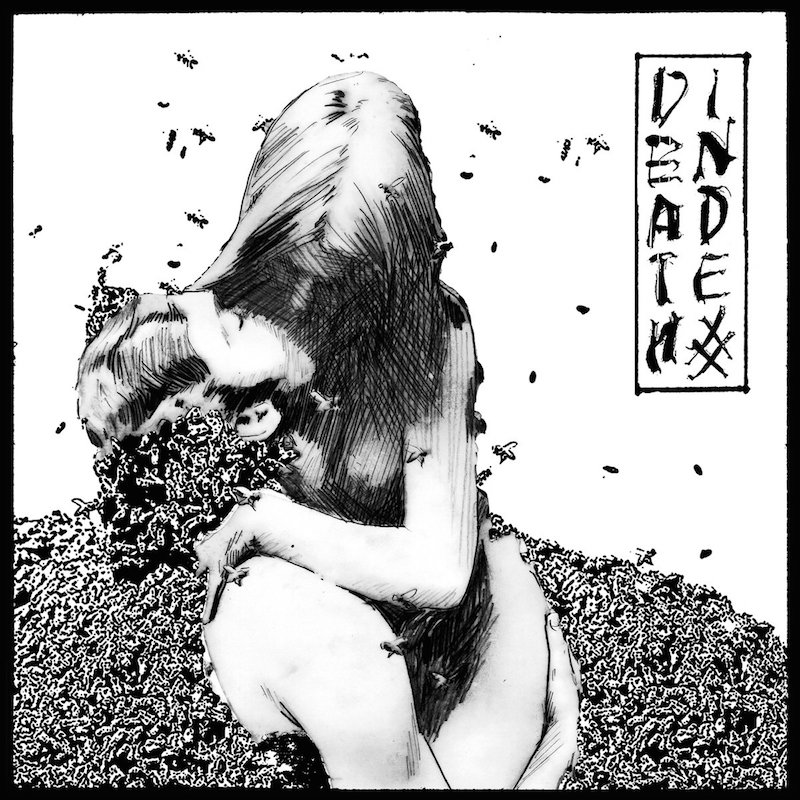 Frontman Carson Cox of Merchandise and Marco Rapisarda (from labels Hell, Yes! and No Good) have teamed up to deal out their latest noise-soaked, hardcore-meets-art punk side project: Death Index. Their heady, self-titled debut album is punishing yet majestic, with a mission firmly rooted in those “primordial days of art punk”—think another punk duo, Suicide, and their nervy tendencies—that traverses doom, goth and post-punk in its hardcore endeavor.

In stark departure from the languishing (yet nevertheless pleasant) atmosphere-building of Merchandise’s most recent release, After the End, Cox returns to Merchandise’s so-called scrappier beginnings and the feedback-laden, noisy, lo-fi flourishes that underpinned the 2012 Children of Desire. Here, there are zero frills: Death Index is fast and abrupt, driving from the get-go with an almost murderous air. The opening track, “Fast Money Kill,” clocks in at under a minute and immediately sets the furious tone of the album, with Cox’s slur-snarls interposed between the incensed drumming and compressed guitar, turning snarky by the end as he repeats, “Take away the pain.”

Despite being just a two-person band, Death Index bring a powerful and whole sound. Multi-instrumentalist Rapisarda (known for churning out similar veins of this dark-punk/hardcore brand with groups La Piovra, Sgurd and Archaic) leads the way in affecting a dread-heavy energy—without losing out on melody. The album’s second track, the whirling single, “Dream Machine,” pulses with the same rapid-fire precision and turbulence as does any Savages song: Deluging fills frenetically fill the space of an otherwise un-hasty main tempo, serving as a backdrop for surprisingly new wave–sounding guitar interludes. “The Meal” is a stormy and steely advance that eventually devolves into austere, processional guitar, while “Fuori Controllo” is not quite as out of control as its title might suggest, and ends its assault as quickly as it starts.

Throughout, Death Index concoct abrasive punk, recalling Killing Joke in passion-fueled effect; The Birthday Party in blustering violence and influence; and Suicide in the spirit of experimentation. Cox’s vocalizations stay back from the manic foreground but retain the same canorous, anchoring timbre and infectious melody lines that continually derive frequent comparisons to Morrissey. Album highlights “FUP” and “Little N Pretty” bleed into each other with frenetic, punchy rhythms that excite the senses before slowing into the eerie and creeping “Lost Bodies” and the grating, feedback-driven “JFK,” two industrial- and goth-influenced numbers. The final track, “Patto Con Dio,” effectively takes up a third of the album with swirling, unhurried post punk before taking a slow dive into calm and airy feedback loops.

Death Index is multitudinous and unpredictable, yet impressively balanced and controlled. As their band name and song titles suggest, Death Index have eschewed out all filler to craft an aggressive survey of death and dying, dominance and violence, insatiable desire. Armed and assembled with bracing guitar, sinister synth lines and rampaging drums, Cox and Rapisarda are uncompromising, equipped with a shared, unabashed stylistic outlook: art and punk (and maybe madness), tantamount. –Kathy Zhou