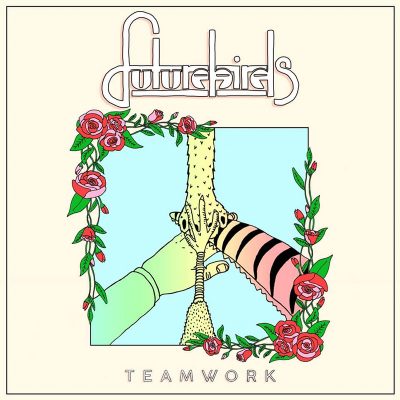 Teamwork, the latest offering from deep-south indie outfit Futurebirds, is a mixed bag of sound and emotion that kept me intrigued from start to finish. The tracks tickled different areas of my mind and all of the various spaces I maintain there. I had only listened to the band passively prior to this album, never having heard much more than a handful of their tracks, if that. So, Teamwork was a relatively new experience for me, and it certainly piqued my interest.

As a whole, the album has heavily polished production, with tiers of sound that often kept me guessing as to what may come next. I was thrown off a number of times as the album progressed, catching a vibe with one or two songs, then having to shift my perspective and position to absorb what was offered with the next couple. Though surprising, this was an interesting and predominantly positive experience.

There is a lot to take in on the album and a lot of facets to soak up. There are so many different instruments and aspects throughout, and each one adds depth and complexity to Futurebirds’ music. “Wear It Out” is a prime example, with a mix of horns and a curious saxophone solo that plays the song out. Another track that surprised me with unexpected sounds was “Waiting On a Call,” with its feedback-laden guitar scraped over electronic beats. That song is the album’s closer, and the one that truly garnered my attention. Its tempo was slower and its lyrics lower than anything else. The singer pleads for someone to hang on to his words while realizing it was too late, singing, “Got you on the phone / But you’re already gone.” Hearing him then tell himself, “Keep love in your heart and keep those eyes ahead,” was a reminder that loss is a challenge most people face at one point. The struggle in the song is relatable, and it seemed to be the most honest track here.

Then, there are the tracks I feel get lost in the middle, dressed up to appear deeper than they actually are. “Crazy Boys” and “Dream, Fam!” both fit that bill. There are good aspects to these two tracks, such as the surf rock-sounding guitar on the former and the dreampop elements in the vocals on the latter. These sounds definitely warrant further exploration, but it’ll have to be another day. Who knows; some of my favorite albums of all-time were slow burns that took months worth of listens.

There are a few standout tracks intermittently placed within the album that will make it easy for listeners to get more familiar with those in between. I really like “Trippin’,” which occurs near the beginning. It’s raw and straightforward lyrically, telling a familiar story that I feel many people will find to be accessible. This song is tightly wound as far as its timing and pace, making it an appealing track for repeat, not to mention the singer’s vulnerable and familiar voice throughout.

“My Broken Arm” is one of Teamwork‘s singles, released a little while back, and another built for gluing folks to the speakers. It’s filled with twangy guitar and a country drawl, all while the harmonies in the background and choruses are telling the listener that the song can’t be honky-tonk. “Killing Ground” is another song that really makes tapping one’s foot an easy thing to do. The drums are a focal point from the beginning—basic, but particularly prevalent. Really, they are a perfect compliment to the gravelly vocals, high harmonies and the pedal steel guitar. I found myself humming this one a number of times throughout the day.

Overall, I like Teamwork. The album is an easy listen and there are a number of tracks that could enhance a lot of playlists. I don’t think it’s for everyone though, as the refined sound and catchy feel encompassing a lot of it may be too much for someone expecting psychedelic alt-country, a description used by many who have written about the band in the past. It didn’t sound psychedelic to me at all—more like pop-touched dark country-rock. Still, it was worth my time and worth a try. –Billy Swartzfager