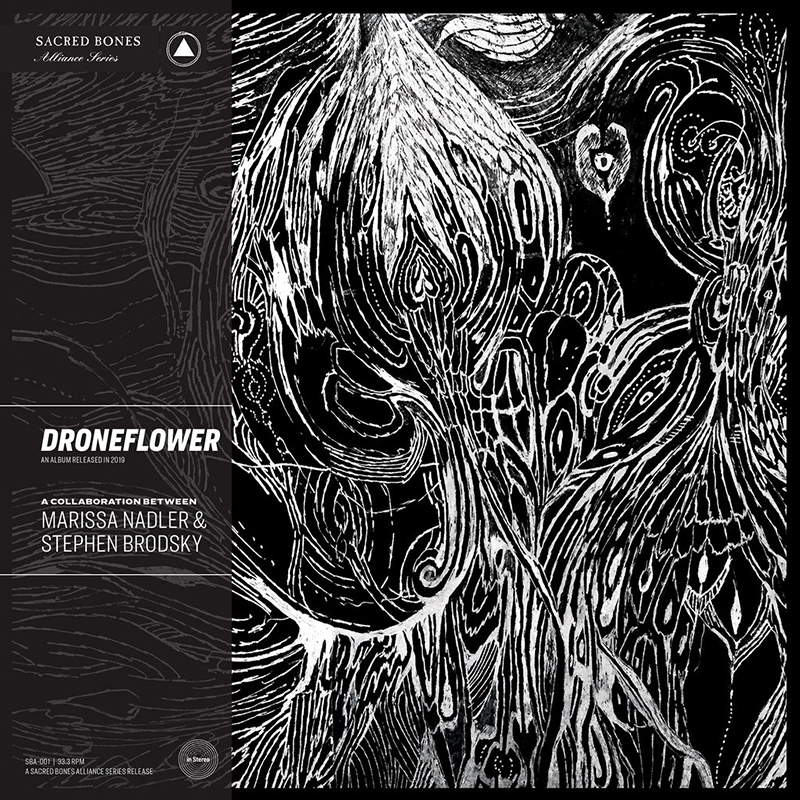 What happens when an ethereal, gothic, gloomy folk singer walks into a drinking establishment in Brooklyn, New York called Saint Vitus Bar and meets a well-traveled, dusty troubadour known for slinging a doom metal grindhouse guitar? A cosmic collision is what happens. Odd pairings and interesting collaborative efforts have bounced around the rock ’n oll cannon for years. Some of these pairings work while others sail directly into the back rooms of bargain record stores or killed instantly and buried in the dirt of the thankfully forgotten.

Droneflower is a collaborative effort of two diverse visions and approaches: napalm/glacial, airy/heavy and beautiful/brutal. Marissa Nadler is an enchantress phantom that haunts every song she enters. Nadler has a voice that sounds like the moments before a rainstorm and the moments following. Stephen Brodsky (Cave In, Mutoid Man) sounds like the storm. The dynamic is why this album works.Brodsky has played in so many bands and has released multiple solo records that I’m not going to laundry list them here. I will put it simply—there’s layers of earth stuck to the sole of his shoes.

The songs on Droneflower play out like unpredictable pendulum swings. Some songs slither out soft-like and acoustic headed toward a metal grind that never comes, while others sound like raking gravel that Nadler barely tries to soften out. Nadler and Brodsky expertly marry gothic scary and spooky with doom metal sludge.  The songs on this record sound like titles to horror poetry: ‘Dead West,” “Buried In Love” and “Morbid Mist.” All of these songs kill. The two ambient and eerie pieces “Space Ghost I” and “Space Ghost II” help provide a somewhat quieter density to the record. Helping to cavern out the album and giving it the space needed to breathe.

“For The Sun” is the standout track on Droneflower. The chugging guitar intro that Brodsky provides is frightening in its build up—it’s almost cinematic. It’s like seconds away before a shark attack or a looming murder in a Hitchcock film—unsettling. Until Nadler arrives and balances out the menace, “I want to love you / But I don’t know how.” Nadler sings in a hollow nervous voice, “And I’m waiting / For the sun to fall.” The chug, chug, chugging of the strings stirs up every last particle of dust on the track. No drums, as no percussion is needed.

The tone of this record never waivers – even when it steers toward the two surprising cover songs. “In Spite Of Me” is a cover of an old Morphine song. It’s as evocative as the original. The other cover is Nadler/Brodsky’s take on Guns ‘N Roses power ballad, “Estranged.” It’s not the same, bloated monster as GNR gave us. Nadler and Brodsky pour out the song as a stirring, soul crushing, lovesick treasure. Where GNR’s version takes off like a locomotive, this version kicks around in a tar pit. Brodsky slices away at this song with a heavy fingered acoustic thrash and a fuzz guitar, allowing  Nadler turn the lyrics into something different altogether. “When you’re talking to yourself and nobody’s home / You can fool yourself, you come in this world alone, alone.” Nadler replaces Axl Rose’s aggressive anxiety with a new millennial depression. “So nobody ever told you, baby, How it was gonna be? / So what’ll happen to you, baby, guess we’ll wait and see.” Enjoy this dark Droneflower of a record—it’s a deathly beautiful delight.–Russ Holsten