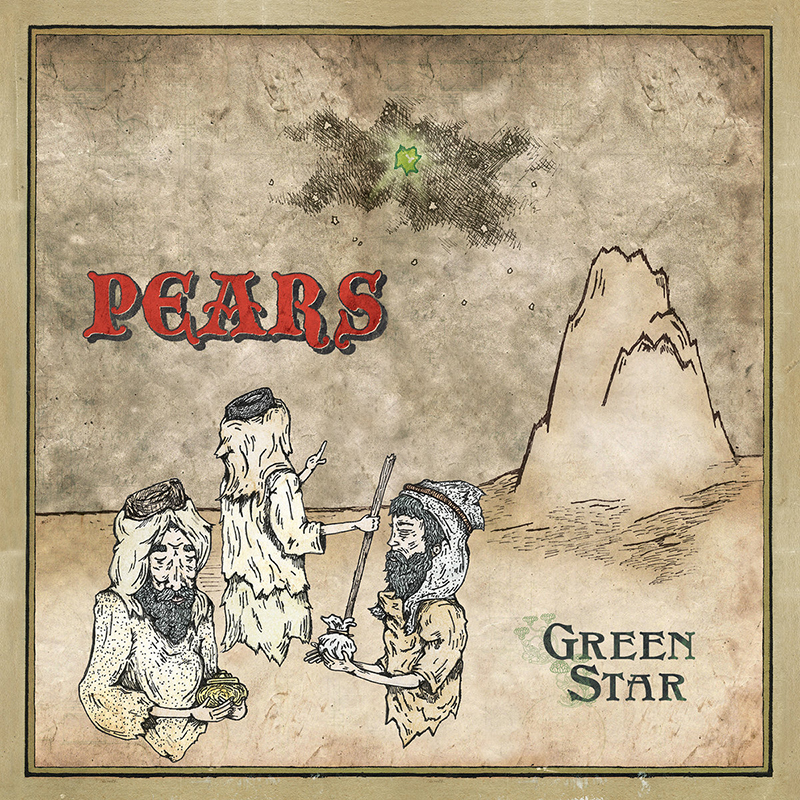 Once during an interview I conducted with PEARS’ vocalist, Zach Quinn, he said that their new album was turning out to be “more Go To Prison than Go To Prison was.” PEARS’ debut album, Go To Prison, was written and recorded in the course of a few days and held all the marvels and raucousness of hardcore punk while still delivering something new—deservedly, it became an instant favorite among listeners, myself included. The conception of their follow-up album, Green Star, included a lot more of a thought process, with rewrites and song rearrangements, throughout the better part of two years—the exact opposite of their debut. The increases process behind Green Star can either highlight a band that is overthinking their artistry or a band that has worked their asses off trying to outdo their last effort. I’ve gushed over PEARS a ton since I discovered them last year and fell in love with them at first listen. I’m going to gush a little more, because Green Star is amazing—not only as a follow-up to the unparalleled masterpiece of their debut album, but also in showing off how they’ve enhanced their sound in the short time since its release.

PEARS have not lost any of their intensity, harmony, or sense of humor in their sophomore release—the first two songs (if you don’t count the 30 second intro track) are just enough to pull you in and allow this album to beat you into oblivion for the next half-hour. “Hinged at the Spine” stays mostly melodic while keeping a machinegun pace, then the preceding track “Cumshots” jumps into their signature sound of fast-paced, atonal riffing and Quinn’s rabid vocals that gives way to 3 part harmonies in the chorus and back to the snarling ferocity in about 30 seconds. Listening to PEARS is the musical equivalent of approaching a dog that seems adorable and harmless but will bite your hand off if you try to pet it—a fitting description for the song “I Love My Kennel,” when the music slows into sludgier territory in the last third while Quinn growls opaque, metaphorical lyrics. That same feral output traverses through the song “Anhedonia” (a re-recorded version from their previous EP, Letters to Memaw), with sinister riffing matched by equally terrifying lyrics, including a gang chant of “Give me death!” that sounds like it’s being shouted by a group of demented 12-year-old girls.

After the first half of the album, Green Star gives a few seconds to catch your breath with “Dizzy Is Drunk,” a 50-second piano interlude that shows off another skill that Quinn offered to this album. But don’t get too comfortable, because before you know it, you’re getting pummeled again: “Snowflake” (the teaser track that premiered before Green Star’s release) hones a Ramones-style guitar riff with atonal tidbits thrown in between each measure. “The Tile of St. Stewart” spends half of its running time concocting a hair-raising guitar buildup and equally creepy vocals whispering, “Have you seen him Mary? Complete the chain, weld it down. Have you seen him, Mary, clench his fists, the cringing clown? Soiled and overbearing, terrify the timid hearts,” before exploding into the chanting chorus: “Tile of St. Stewart! Are you guilty Stewart? Do your insides rot? Are you guilty Stewart? Become what Hell begot!” After more unhinged thrashing, it all gives way to another piano interlude, “Jump the Fuckin’ Ship,” which gives over 80 seconds of soothing harmony before setting up for “Great Mt. Ida”—the closing number that starts off fast and melodic in the first third, switches into more metallic riffing with downbeat breakdowns and closes with a buildup of rolling drums, ambient guitar sounds and Quinn’s final lyrics: “What we’ve held in our hands, gone with us, eternally absent, free. Take me.”

This album is good—really good! The time and effort Pears have put into Green Star really shows that they’ve done their damnedest in making an album that is rooted in its predecessor but also stands on its own. To reprise the aforementioned quote, Green Star really is “more Go To Prison than Go To Prison is.” (Urban Lounge: 05.29.16 w/ Subhumans) —Eric U. Norris