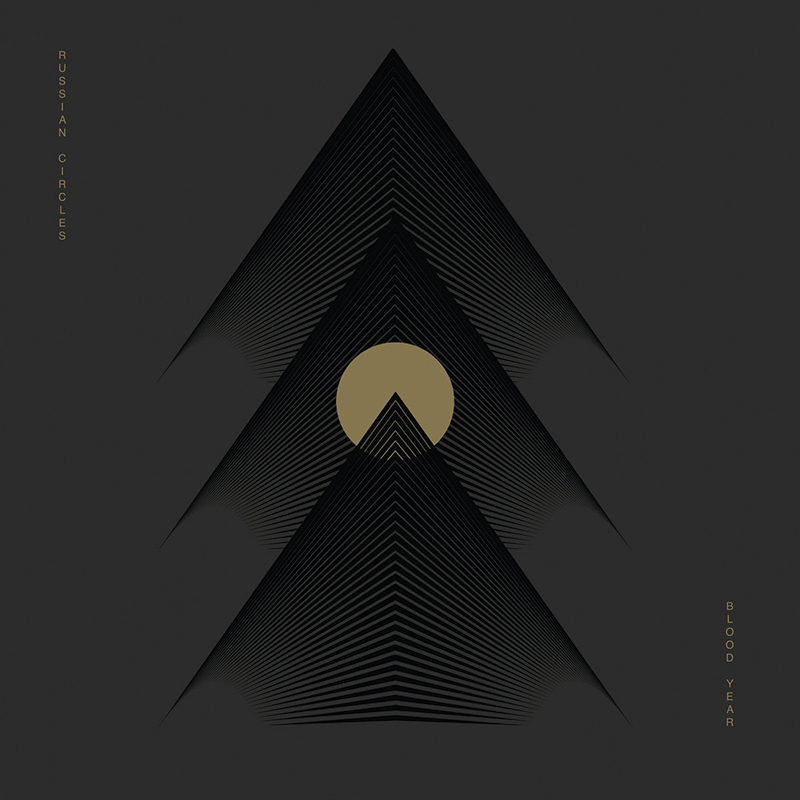 I was sitting in a dark room, brooding on deep topics as a thunderous bass line reverberated between the shadowy corners of my consciousness, I finally began to understand exactly what the intoxicating energy that powers every verse on Russian Circles’ newest release, Blood Year. It’s the kind of feeling which accompanies the music of Rage Against the Machine, Tool and Rise Against. It’s a feeling of ire, a feeling of purpose, and a feeling of raw, unfiltered, animalistic power. Blood Year is not the kind of album that will hold your hand and guide you through a pleasant soundscape. It’s the kind of album that tears forth anger and power from the deep, dark abysses of our nature—in short, it’s badass as hell.

Thick distortion, fuzzy bass and pounding drum grooves are the basis of Russian Circles’ style. Their sound is invariably deep and menacing. “Arluck” showcases a flurry of drum fills and relentless guitar riffage before exploding into screaming licks and chaos. “Sinaia” slowly builds its pulsating groove, as though preparing a ritual that climaxes in a dark eruption of thick bass, ferocious guitar and relentless drums. Each song on Blood Year turns into a head-pounding riff-fest, that gets in your face and stays there from beginning to end. While every song on the album is distinct, they all share a powerful, dark atmosphere ripe with explosive fills and licks that keep me coming back for more.

From the explosive blast beats in “Milano” to the thunderous hammering of bass lines in “Kohokia,” Blood Year has been polished smooth. The band has a visceral sense for how to build their songs up, eventually releasing hell-storms of riffs and double bass fills from amidst chaotic soundscapes. Each instrument has a clear place in the mix, with the drums throwing down a thumping pulse, guitar screeching a reverberant melody and soupy bass gluing it all together.

If I had one complaint about Blood Year, it would be that the album never lets up. Every song, with the exception perhaps of the intro, is intense, loud, high energy, fast, dark. While each song is certainly impressive in its own right, put all back to back, the experience is a little heavy. This is the kind of album I sample from, revisiting one or two songs at a time as opposed to listening end to end.

I’m always impressed by the sheer amount of sound trios are able to produce—and in this respect, Russian Circles do not disappoint. Their mix is thick with fuzz and pulses with a steady, entrancing rhythm. Compared to their previous albums—of which there are 7—Blood Year is both darker, and less somber. While Guidance certainly had its fill of head-pounding, and Station had some furious riffage, Blood Year goes all out in every song. As intense as it may be, it’s an album I won’t soon forget!

If you’re looking for something intense, a bit dark, a bit angry, and a hell of a lot in-your-face, I would definitely recommend Blood Year. While it’s not the kind of album I’ll listen to all the way through each time I spin it, every song has a thick power to it that intoxicates me into a powerful, riotous spirit. I’ll certainly be revisiting these pounding tracks throughout the year when I need to get hyped! You can preview the album over at Russian Circles’ Bandcamp and pick up your vinyl copy of this post-rock mayhem while you’re at it! –Alex Blackburn